It's been quite a week of celebrity scandals. One for the books, you might say. What a sad story is the life and death of Anna Nicole. If you’re interested in my thoughts, check out the Ape Culture blog.

This Ryan O’Neal family drama is particularly ridiculous. If you haven’t heard, apparently there was a brawl between Ryan and his sons and a girlfriend or his son and a girlfriend or his sons with him intermediating. Everyone has a different story but long story short: girlfriend has a black eye. In any case, one son is accusing Ryan of battery, Tatum appears to be is supporting her brother who is, for some reason, telling her to bug off. And meanwhile, the step-brother was allegedly tied up in a basement at one part of the fracas and Farrah, his mother, is just a mess over it. And that last part is the only thing that’s not news.

I saw the E! True Hollywood Story on Ryan which, if it is to be believed, suggests he has banked up a dastardly large amount of bad karma in his life…which is probably what is kicking him in the fracas right about now. Whether he did anything or not.

Which inevitably brings us to Faithful, that painfully slow and unbelievable Cher movie that came and went back in the mid 90s. Why-oh-why did Cher get tangled up in a Ryan O’Neal movie thereby forcing me to suffer through his awful, charismatically-challenged, whiney performance? Much like his performance in front of the paparazzi this week. Is there a wailing wall for situations such as this?

I have never in my whole life understood the hoopla over Ryan O’Neal. I’ve always seen him as a over- rated Playboy, skinny (now bloated), pasty-faced, white bread, absentee father near-do-well who has skated by his whole life all too easily like some asshole high school sports hero from some Americana small town. To add insult to injury he carried around some air of Hollywood entitlement and I just don’t get it. On top of that he raised dysfunctional kids. Remember Tatum on The Cher Show? Awww…poor little white-trash rich girl. She’s a mess now. And she’s the good one!

Ryan is one of those people who remind me of that great scene in The Color Purple when Celia’s sister Nettie is running away. I see Nettie staggering back along the outside of the fence sobbing, “Until you do right by me, everything you do is gonna fail!”…except it isn’t Danny Glover she’s cursing at, it’s Ryan O’Neal.

By the way, my iPod shuffle feature continues to be an education in juxtaposition. Yesterday, I heard back-to-back Sonny’s ode “Laugh at Me” (S&C Live Vol. I version) followed by Neil Diamond’s “Captain of a Shipwreck.” And a most interesting, groovy shipwreck it was. 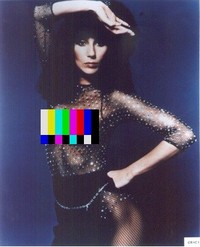 Judge not ye Cher fan, least ye be judged. Shortly after I posted that Diva Skank post, I remembered a public faux pas that happened with Cher back in 1979 at a roller skating party. Some photographer captured Cher's "shelf" (as my mother would call it) when the camera flash penetrated the mesh of Cher's black top. Unexpectedly. It was scandalous. People wondered the same thing at the time: was that an accident or a skanky publicity stunt? I can't find the paparazzi shot, but it looked something similar to this outfit to the left.

Truly, Shakespeare (and Agatha Christie) had it right: there's nothing new under the sun. 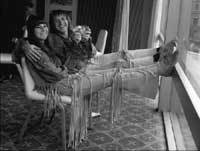 So I'm assuming everybody has seen the recent skanky Britney Spears photos. If you're underage, I'm hopefully assuming you haven't. I'm not quite sure this was the best way to clean up an image after Kevin Federline's long-overdue exit; but I'm not a bonafide Stylist so what do I know about the latest celebrity look.

In a recent New York Post blurb, Cher's publicist, Liz Smith, encourages Britney to hang with Cher instead of Paris Hilton, saying Cher is "clever and level-headed." Liz also snipes that Cher is "actually famous for something."

Now, I wholeheartedly agree with Liz; but I know more than a few snarky rock fans out there who will jump all over that one. Cher once had her own legitimacy problems out in the arena of public opinion.

In any case, haven't they all released perfume lines? Heiress, Curious, and Uninhibited. Although, rumor has it Cher now wears a chocolate sent called Comptoir Sud Pacifique Amour de Cacoa. Go buy these if you simply must smell like your favorite Diva or if you're Britney and you have some recent smell of public skank to cover. Britney! Don't make Paris look angelic, now. What would Bob Dole think?

Anyway, Cher wouldn't hang out with Paris Hilton. Cher's had enough drama with the Hilton's of this world, way back to 1965 when Sonny & Cher tried to stay at the London Hilton and press reported them getting booted for looking like skanks themselves. I found this photo today on Google images. It purports to be S&C actually at the Hilton back when Paris, who wasn't born until 1981, was just some skank-potential floating around her mum's young fallopian tubes.

Well at least Cher can exit a car like a hippie lady in those pow-wow chaps.

The Cheekbones of Katharine Hepburn 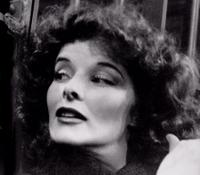 Hey now, the Official Cher Fan Club site is up again! I’m excited. For a minute. Then I find out the Join feature is still disconnected. “Check back soon.” Oh, you can count on it. So my wait to join this Cher fan movement continues. And I continue to feel like an outsider to their particular shenanigans.

As I’m surfing through their website, I’m also watching reruns of the 70s talk show classic, The Dick Cavett Show (there are no fan sites of Dick Cavett--don't think I didn't try). Cavett Show reruns are on my roommate's tivo. This one is Katharine Hepburn. For about five years I’ve been working on a long-form Hepburn poem based mostly on Barbara Leamings biography of her family history, "Katharine Hepburn: Star as Feminist" by Andrew Britton (read my review), "The Making of The African Queen" by Hepburn herself and "Tracy and Hepburn" by Garson Kanin (Kanin and Ruth Gordon and Hepburn and Tracy were apparently a friendly foursome). Anyway, that mess of verse is now sitting unfinished in a box. Meanwhile, I’m watching this show as I blog, thinking she sure is a Chatty Cathy. But this is actually an historical TV moment, the Cavett episode where she throws down one of my favorite Hepburn quotes. I get vaklempt every time I hear it excerpted on a Hepburn documentary:

Fear is what you and I suffer from trying to be fascinating; which is asinine position to be in, you know, really. Here I am and aren’t I great department and it’s embarrassing; and you’re never sure that you can do it. If you have been taught basic freedom from fear and a basic belief in what 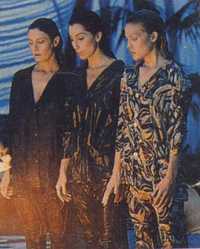 you’re doing that is sufficient to carry you when everyone and his uncle thinks you’re wrong; and you still think, God  damn it, I don’t think I’m wrong. I think I’m right and I’m gonna do it.

Cavett then quotes someone who stated Hepburn had the best cheekbones this side of Dover. This side of Dover: that must be an old 70s turn of phrase. Hepburn does have great cheekbones. But Cher’s are better. Well, they were better when Cher carried more of a gaunt look. I hope that’s not an effect of Botox, loss of cheeckbone definition. Because that's a high price to pay for a lack of wrinkles. I’d go for the cheekbones any day and twice on Sunday. But then I’m a true blue for people with beautiful cheekbones. My short list: Cher, John Waite, Katharine Hepburn. All the gals in Witches of Eastwick have good cheekbones.