Cher just made a big splash (or two) at Fashion Week in Paris: 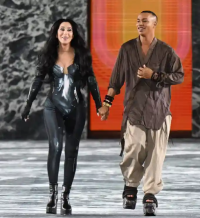 I’ve been keeping my nose in projects lately. On top of that, ICANN had a meeting in Kuala Lumpur so it was the nightshift for me last week. And now cleaning furiously for a visit next week from my friend Natalie (the real Lion in this story) is visiting and we’re taking a scenic train trip on the Cumbres & Toltec Scenic from Colorado to Chama, New Mexico. We’ve been trying to plan this trip since Covid started. Sigh.

And I’ve been continuing to work diligently documenting Cher TV shows. Recently I finished the tour through the solo show. As part of that I watched the Bob Mackie interview in the Cher TimeLife DVD set. Here's a summary of that:

Mackie said he started working with Cher when she would ask for him whenever Sonny & Cher did early 1970s TV specials and Cher liked working with him because he was young. She was intimidated by old people in show biz, Mackie said. “I’ll never be older than 30,” she told him. “I’d be old then.” Mackie added, “look as us now.” Turns out death is kind of more intimidating that old age.

Anyway, Mackie says he saw S&C as a novelty group back then and that after the Beatles arrived they weren’t really getting booked anymore so they transitioned to a nightclub act.

He acknowledges Sonny & Cher were the same height, but that Cher had “a tall look.” He said for the first season of their variety show the network gave them no money and so Mackie had to recycle Carol Burnett dresses (they are the same size and measurements) and keep using the same basic white dress made over with embellishments. He said Cher always looked better than the models in his clothes. He said Sonny and Cher had a good PR agent and Cher was getting a lot of magazine covers.

Mackie says he was there for the first variety show planning session and he remembers the writers didn’t really know what to do with Cher. Was she like Keely Smith? No. Mackie could see Cher had something nobody else had. “She looks like nobody in show business.” Was she American Indian, Middle Eastern, Hispanic? He reiterates that he thinks her armpits are her best feature. He said she had a nice “soft six pack.” He said once the censors saw the show’s huge ratings, they relented on the belly button thing.

Mackie says they were always running late and pulling all-nighters on sewing outfits. Dresses would be hand-beaded and take hundreds of hours to finish. Cher was always very happy with bugle beads, crystals, feathers and rhinestones. Mackie’s favorite dress was the Time Magazine/Met Gala dress. “It looked like you could see something but you couldn’t.” 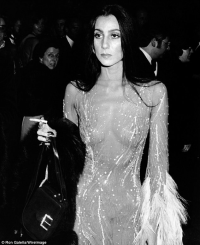 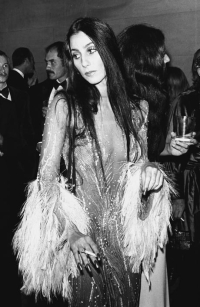 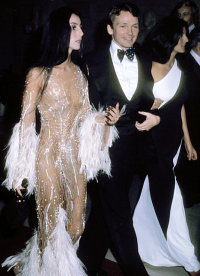 He says Cher outfits have been experiencing Internet nostalgia recently and he sees copies of his dresses on young celebrities and drag queens everywhere.

He says their outfits were never vulgar, never trying too hard. Cher was “never posey” and could rock a t-shirt and jeans as easily as a historical costume dress. He said she was fearless with outfits and unlike other glamour girls wasn’t afraid to look silly. He said Cher was really laid back and easy and full of energy.

As we know, Mackie was doing the full suite of costumes for The Carol Burnett Show and only had the bandwidth to do Cher’s outfits on all her variety shows. Ret Turner took over, working with Mackie, on the rest of the cast including Sonny and Chastity. Turner and Mackie had worked together on lots of shows, Mackie said.

Of the Tina Turner, Kate Smith, Cher Beatles medley, Mackie says, “you will never see that again” and “you have to see it to believe it.”

He says the Laverne character is the complete opposite of Cher. He says he worked with Teri Garr earlier when she was a dancer on Hullabaloo. He said the 1970s was the Golden Age of Variety (which surprised all of us, Mackie said, “because we thought were at the end of the road.”) But never again would networks spend that kind of money on a big orchestra, couture-level costumes, sets and all-around glamour.

Mackie said in the recent Broadway show think-tank sessions Cher’s likeability kept coming up as a phenomenon. Cher wins you over, Mackie says, and people have an “odd fascination” with her. People “always wanted to know what Cher was doing.” He said it was “tough for the girls playing her. Nobody’s quite like her.” I really enjoyed re-evaluating the Cher episodes in chronological order this year and I came to have more respect for what the show was doing: more overt feminism, trying to present Cher in her own right, a stronger focus on musical guests. There were a few cringy moments but there were just as many, if not more, really fabulous, history-making moments the show doesn’t get nearly enough credit for. It’s the show I was probably the least familiar with going into the project, having never seen any episodes before VH-1 re-aired some in the 1990s. I definitely could see a continuation of the cultural work the Comedy Hour was doing but with a bigger bang.

In some sense, the next incarnation of the Cher TV with Sonny would seem like a regression. But it wasn’t. After sweating it out on her solo show, Cher could now hold her own side-by-side with Sonny and it shows.

And any tension underscoring their post-divorce reunion may have turned America off (as the show’s ratings didn’t stay high), but looking back the show was nonetheless interesting in some entirely new ways.