When Cher Sings a Song: What It Means 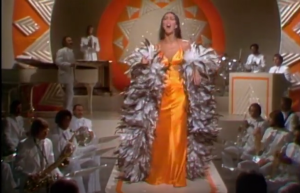 So I’ve mentioned before how when different people sing the same song, it can have different meanings; and this is because every person brings to a song their own “star persona” and personality and backstory and public backstory.

Andrew Goodwin talks a lot about this in his book Dancing in the Distraction Factory about music videos in the 1980s and 90s. A music video was never just a music video, but a piece in a conglomeration of promotional materials, star personas, the history of entertainment on television, (and he doesn’t mention it but this includes musical segments on old variety shows), posters, album covers, magazine interviews, TV interviews, aspects of business and the whole cyclone of products, promotions and pressures that circle around a song.

So while I was working on the latest Cher show this week, her opening song came up as a perfect example of this. First of all, I had never heard this song, “Keep the Customer Satisfied,” before last weekend; but I loved it immediately and saw it as the kind of song Cher would often use to explain herself, certain songs she sings over and over again, like “More Than You Know,” and “’Aint Nobody’s Business.”

I was very surprised to discover this was a Simon & Garfunkel song, written by Paul Simon. And when they sing it (and as the lyrics literally read) the song is about being on the road and the perils and pains found there.

But Cher can’t help but lend a different spin to the song. She sings a few bars of the Janis Ian song “Stars” as the initial torch moment of the opening. “Stars” is a song about how alienating stardom can be. This was a significant song on her 1975 album (and not the only song on the album dealing with issues of fame) and it is significant that this was chosen as the title of the album. So from the beginning of this performance, Cher is setting up that “this song is about me as a famous person.”  This affects the context of the matching, following song, "Keep the Customer Satisfied" which in her hands focuses more on slander and libel than life on the road.

In her version, the road is more figurative for her whole celebrity life. At the time Cher was the most recurring cover girl on news stand tabloids, which were full of silly, off-the-wall stories about her love life (mostly involving people she had never met). She was also criticized for her divorce and risqué costumes. Here she’s presenting as a working showgirl just trying to do her job and entertain. The sheriff becomes not a literal middle-America sheriff but middle-America itself.

So literal details can become figurative depending upon what the singer persona brings to the song. It’s a magical thing.

It’s also a catchy song. And this isn’t always the case, but here I like the Cher version better, even though the big production of the S&C version has a fun build. I feel the song fits Cher's drawl and delivery. She brings more gravitas to her version. Because really, how slandered and libeled were Simon and Garfunkel compared to Cher.

Or was anyone I submit to you.

the opening numbers on the Cher show were not that great. She screamed the lyrics and every song
was speeded up. The only time cher did a good job was on her special, when, she sang Let me entertain you. who ever was responsible for that musical moment should have been hired to do all
the musical numbers.

Cher should have listened to george schallter about voice lessons.

Mary, you saw the Broadway Play, The Cher Show. Did they have merchandise for sale the way they
do at concerts, including a program book? I may have already asked you. Have you seen the various
promos on the New Cher Show traveling in Europe. I love it!!!!!!!!!!!!! The 3 chers are fab......
THe middle cher is soooo cool, but I like them all.

When I saw the show in NYC there was no program, but there is now and some other merch: https://www.broadwaymerchandiseshop.com/collections/the-cher-show
You can also get the cast recording on Amazon/ebay/etc: https://www.amazon.com/Cher-Show-Original-Broadway-Recording/dp/B07PL9ZRHN/ref=asc_df_B07PL9ZRHN/ I did not like the casting of the UK show at first but it's growing on me, especially the casting of a Cher as person of color. Very cool. I agree some of the opening 1975 Cher performances were cheesy and all over the place. But learning so many songs a week had to be a challenge and it's the imperfections I like (much better than the voice-lessoned vibrato-less Geffen era anyway).