The Kiss-Off Songs of Sonny & Cher

Full disclosure: when I was eight years old, I found Sonny & Cher's final record at the local library. This album seemed totally crazy (even for an eight year old) and yet I still proceeded to develop a nine-minute dance routine to Sonny's confounding title opus.

Now, every time the song "Mana Was a Rock-and-Roll Singer, Papa Used to Write All His Songs" comes up on my music app shuffle, I can't help but compare it to the song Cher chose to sing to Sonny during one of the final episodes of their TV variety show. 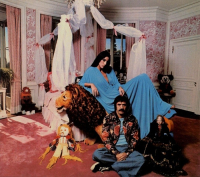 Sonny's song is particularly venomous and disingenuous, full of bitterness. What's most shocking is that he got Cher to sing it.

"Damn you girl, you went and messed up the world" is really its prime motivation but includes attacks on Cher's alleged promiscuity, her looks, her treatment of him, and mysterious manipulations that allegedly led to someone getting jail time! Although Sonny does admit Cher is "super fine and blows people's minds."

The song then oddly floats into a reflective set of movements which take up two-thirds of the running time and proclaim a false modesty repeated over and over only to disprove the adage that if you repeat something enough times people will believe it.

The last two thirds include a full production with children's chorus, agitated strings and horns, a gospel singer, and a guitar solo which you don't even notice right away because so much is going on!

It's really something. Why is Cher involved in this again? Oh yeah, because even when she was pissed off at Sonny and he was being a complete dick, she still loved Sonny. And then, just when you think it's over...

In contrast, Cher's fare-thee-well song to Sonny was Jimmy Webb's "Didn't We." Spectators to her performance of it, one of the final taped solos of the 1971-1974 series, say there wasn't a dry eye in the house, including Cher's.

Every time she sings, "And this time we almost made that long...hard climb," that emotional part always makes me sad.

Sonny also wrote a solo song called "Last Show" but it was mostly about losing the shows, not about losing Cher. And don't get me started on the grammatical uses of she and her. That song just makes me tired. I actually prefer the crazy opus if I had to choose. And, luckily, this world does not require that of us.