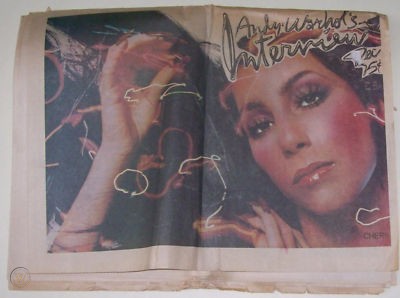 I'm not proud of it, but when I saw this come up on eBay a few weeks ago, after waiting decades for the issue to show up, I literally threw money at it with the dangerous Make an Offer feature.

And after reading it I wasn't very sorry I did. I think this is an important interview for 1974, albeit annoyingly gossipy to the point of catty and status obsessed, as Andy Warhol's Interview could often be. (Andy and Bob interviewed her once again for the March 1982 issue)

In 1974, Cher, David Geffen (who Cher was dating at the time), Andy Warhol, Bob Colacello and Andrea Portago all met at the Hotel Pierre and they all mostly talk about shopping.

Every column or so of text had a list of shorthand topics that were discussed but not transcribed. An example:

Another especially egregious example is this one: However, there are some unique conversational events in this interview.

Andy, Bob and Andrea leave the Pierre and talk about how good Cher looked without makeup and how "she'd be fun to shop with--she loves all the jewelry."

Posted at 09:02 AM in Film, Giddy Gossip, History, I Am Not My Hair (Inner Beauty), Scholarship In Action, Television | Permalink | Comments (2)

Nice little bits! Thanks for sharing

OH BTW - I found those things! I am posting them Wednesday!! 8/3