One thing I finished in April was the ‘shrine’ in the Cher She-Shed. Full disclosure, the story of the she-shed Cher shrine is a long and winding one. It began, one way or another, all the way back in 1998-9 when my friend Julie cajoled me onto the Internet and I discovered early Cher fan websites in the mid-1990s that mostly contained only copious amounts of pictures of Cher.

At the time I called those sites disparagingly 'Cher shrines.' After learning HTML for Ape Culture (Julie again), I secretly wanted to create my own Cher website but wanted to avoid a shrine. I came up with the jokey 'Cher Scholar' to pretend scholarly legitimacy. I’ve since come to learn you should be careful what you joke about. Jokes can overtake you. Sure enough, in 2010 I found a copy of the journal Camera Obscura with an academic essay on Lena Horne and I've been aspirationally scholarin’ since.

Around the same time I had moved to New Mexico which is composed of three large groups of people: Native American Indians, Hispanics (self-identified descendents from Spain vs Latin Americans) and Anglos. When I moved here I started  researching the major Anglo artists here, including the Taos and Santa Fe art colonies and the grand dame of Anglo art here Georgia O’Keeffe. O’Keeffe is important in New Mexico for two reasons. (I promise this will get back to Cher). First of all, she’s one of the very few female artists with a museum dedicated to her (thanks to heiress Anne Marion). She’s also a pretty good interpreter of New Mexico from the point of view of Anglo transplants. And there has been a proliferation of Santa Fe artists and writers that are descendants of her style (and lifestyle).

Back in the 1920s, 30s, 40s and 50s my grandparents accumulated a bit of American Indian art from my grandfather's career in the Indian Service. I had a somewhat advanced knowledge of traditional Pueblo arts in New Mexico and Hopi, Arizona. Meeting students and teachers while working at the Institute of American Indian Arts in Santa Fe and visiting their associated Contemporary Museum (the area’s most interesting modern art actually), I caught up on non-traditional artists. But knew little to nothing about the Hispanic arts in the area

Back in 2015, I started working at a community college in Albuquerque and I took a class on New Mexico Art History. It was the whole world of Spanish-influenced New Mexican arts that had an impact on the Cher shrine as it came to be.

New Mexico was a very remote area in the empire of Spain for about three centuries. As a comparison, New Mexico has only been part of the United States for less than 200 years. Some very unique arts and culture developed here due to area's remoteness (from Spain and even Mexico), particularly objects related to the Spanish/New Mexican Catholic Church, as well as the practice of speaking Spanish here that was so secluded, it 'stagnated' (or separated from the natural language evolutions happening in Mexico and Spain) and became a different dialect of Spanish that is spoken to this day in Northern New Mexico and Southern Colorado. 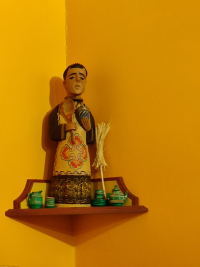 Most of these arts were developed from lack of materials like gold, silver, wool and plaster. This includes fiber arts like colcha (lack of yarn), tinwork (lack of silver), straw filigree pieces made with wheat (lack of gold), and wooden altars they call retablos (lack of painting canvases) and bultos (or santeros), wooden saint statues (lack of plaster).

Anglo painters like Marsden Hartley even painted the retablos and bultos.

There are pre-historic and multi-cultural arts here that exist nowhere else on earth.

And here is where we come back to Cher.

The idea to start a fake-shrine began when I acquired the praying-hands Cher blanket (at the Chersonian, we call it a “tapestry”) which was originally sold on her Believe tour. I thought immediately I could hang this up with a two-person pew beneath it. Fans could then pray "with" Cher if (hopefully not) "to" Cher.

Then I found a little tourist retablo of Saint Cecelia in Santa Fe that looks totally like Cher in the 1970s. Catholic candles are very popular here (you can find them at every grocery store) and there are now Cher versions proliferating on Etsy. I snared one for the decades 1960s, 70s and 2000s. I then collected a few tin nichos (little nooks) in need of pictures so I downloaded some  Cher pics in prayer gestures and a very creepy Cher head transposed onto Jesus. 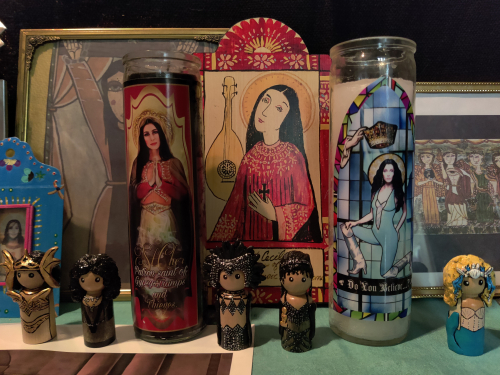 At Spanish Market I ran into the booth of an artist who calls himself the “Picasso Santero,” Jose A. Lucero. His Jesus retablos had an uncanny resemblance not only to Cher in various colored wigs but they even uncannily indicated a Picasso-like post-plastic-surgery Cher. How great is that?? 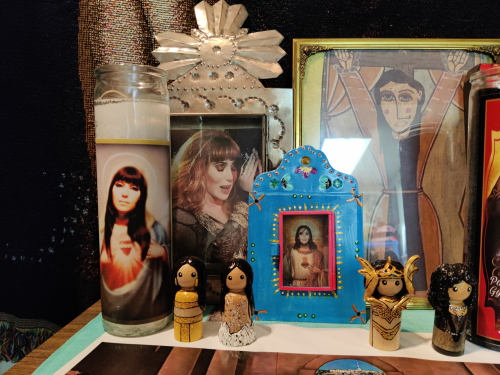 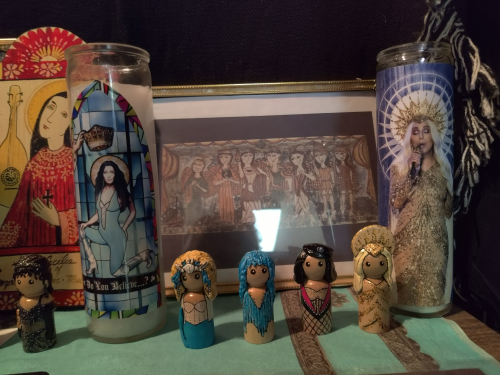 The Cher store at Caesars Palace put out Cher mints that serve a handy Eucharist. And then I found the handy fan-made kneeling pillow (to replace the pew, which there was no room for). 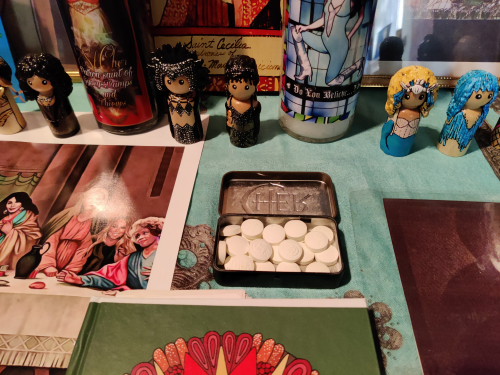 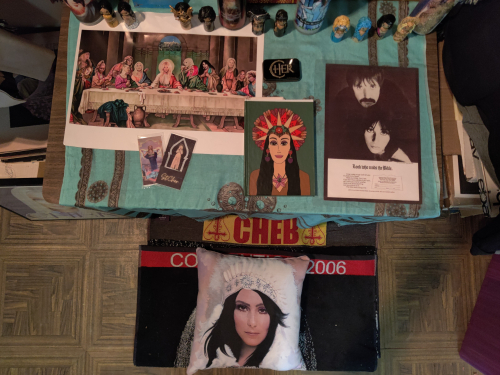 You may recognize the Vida scarf Cher designed a few years ago underneath everything.

One day I found a fan-made picture of the Divas Last Supper on Etsy. It arrived in the mail with a Britney Spears laminated card. I had no idea what this card was and asked Mr. Cher Scholar who informed me it was a Catholic prayer card. It took me literally a second to decide to design a Cher one with her lyrics for “Chastity Sun” serving as the prayer on the back.

All that was missing were the bultos, the wooding carvings of the saints.

I couldn’t very well ask religious artists at Spanish Market to make me a custom Cher bulto, although I’ve stood in front of many a vendor table contemplating it. “This Jesus is so cool but…”

For Christmas last year my friend Julie got me a little wooden doll of Cher carved with her "Take Me Home" outfit. She found a Palo Alto artist named Holly on Etsy who does various wooden pop culture figures and she has a whole suite of Cher dolls in iconic outfits. I suddenly realized these was technically tiny bulto figures.

And so the New Mexican She-Shed Cher Shrine was done.

It’s been a big unnerving to watch some of my more religious family members tour the Cher she-shed but I did find the "Sonny & Cher read the Bible" advertisement; so I hope that mitigates the sacreligiousness for them somewhat. The religious visitors don’t seem too disturbed, honestly.

It’s the straight men who experience adverse effects repeatedly. I’ve taken large family groups into the shed and the girls (gay or straight) all express surprise and delight (which is always a shock to me considering how dorkey the whole enterprise is). But after the initial pass-through, I will invariably look around and all the straight men will have disappeared.

I look out the door and they’re out on the lawn literally fanning themselves. I’m not kidding. I think they’re having a religious moment.

Posted at 07:36 AM in Cher Product, Scholarship In Action | Permalink | Comments (4)

I have witnessed the evolution of the She Cher Shed and am very excited to see this new addition!!!

Mary,
I have all the Sonny and Cher Concert Program books. But I wanted to know were there ever
Concert Programs for Cher when she did the Take Me Home/Monte Carlo show and
A Celebration At Caesars show?

My sister saw Cher at the Caesar's Take me Home show. There were a large pin-on purple badge
with the circle cher logo and a small red velvet 2 page booklet with a couple pics of Cher inside
laying on the table.

Good question, JDP. I am not familiar with the artifacts of those three shows (Take Me Home/Monte Carlos/Celebration at Caesars). I have seen the little red booklet for the Caesars show but don't know if it replaced a program or was the program?

Hi Jimmy - I saw the Cher Take Me Home tour in Atlantic City - and NO - there was no program!