It's baking time...so this will be the last Cher Scholar post for the year. I feel like 2021 was mostly getting my head back on track after the drama of last year. Hard to believe I've done not one single Sonny & Cher Comedy Hour recap (and I was so close to the end of that series). Well, hopefully next year.

The Cher Christmas tree is up this year with two more dolls. (Had to upgrade to a bigger tree this year). The nativity of boyfriends is back, as well. 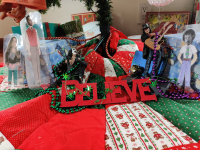 It's Christmas so it's time for people wanting to watch Moonstruck again. Here's one last essay from this year's scholarly readings of Moonstruck-think-tanking, "An Honest Contrivance': Opera and Desire in Moonstruck" by Marcia J. Citron.

Citron talks about the movie's tone, "romantic idealism tethered to the magic of the moon" and how the movie's conceit balances so precariously by successfully between realism and maudlinism. She identifies each part of Puccini's La Bohème as a part of the movie's soundtrack, the actual opera scenes, and the ways in which each Puccini theme ties to a character, mostly Ronny. She concludes "the verismo idiom of Bohème...has a stunning impact on the film." She even provides us with a table listing each act, the DVD timestamp, the piece of the score, the location in the plot and whether the musical element is a soundtrack piece or a literal opera performance. "The visit to the Met to see Bohème occupies a central place in the story, and Bohème is foregrounded as ritual through signs, posters, and phonograph recordings...it's use of opera music...performs important meta-level functions for memory, conciousness, and desire."

Cher's character in the film is explored as well: "Loretta Castorini an uncomprehending novice...throughout the film she has been independent and functioned as an individual with her own mind. Film scholars see her as an unusually strong female character in a genre in which women have been subordinate to men...Loretta appears to have internalized the opera-desire connection and made it her own, even though Ronny instigated and controlled the music." (referring to the scene in his apartment when he put a Puccini record on his turntable and then later when he invites her to the opera).

So recently my friend Natalie asked for a Christmas mix. My personal Christmas mix is on my iPod and quite a few of the songs included on it are not available on Spotify, including all of Cher's Christmas offerings. Searching for them today online  reminds me how much Christmas material Cher performed on her various TV shows. Maybe this is why she's not in such a hurry to give us a Christmas album. We're insatiable, Chrismastly speaking.

Years ago I did a brief breakdown of all the Cher Christmas shows.

Here are the elements of those shows:

The 1969 Glen Campbell Goodtime Hour with Cher
Where they started singing "Jingle Bells" that tragically hip way. Look, he surprises her with misletoe. Adorable!
https://www.youtube.com/watch?v=VT06CBkTkyM

You can now watch the entire show on Amazon Prime.

The ultimate Cher Christmas song is, of course, "O Holy Night." Unforgettable. So much so that there was once a yearly tradition to recreate it on David Letterman. Watch Paul Shaffer yearly rendition (as is tradition).

The 1973 show was a big production of festive.

Cher also did this one both years, I believe: "One Tin Soldier/It Came Upon a Midnight Clear"

You can now watch the 1972 show on Amazon Prime.

The poinsettia-fest that is "Some Children See Him"

The full cast doing the big finale ("I Love the Winter Weather/ I've Got My Love to Keep Me Warm/Let It Snow," "Santa Baby," "Santa Claus is Coming to Town," "Jingle Bells with a Steel Guitar," "Christmas Island," "Christmas in Trinidad," "Silent Night") with Foxx, The Lennon Sisters and The Hudson Brothers.

The full show, (the Redd Foxx as an elf is a funny sketch.)

The Divorced Show also had a Christmas episode.

The kooky medley with Bernadette Peters and Captain Kangaroo which has Elijah's first if not an one very early appearance.

Watch the show on Amazon Prime.

In the 1980s we also had a few Christmas appearances:

Have a Cherry Christmas everybody and stay out of trouble. ;-)

Out Here On My Own: Cher, Irene Cara and Karen Carpenter

Cher is in the process of releasing parts of her 1982 Concert Special A Celebration at Caesars song by song on her YouTube channel. If I hadn’t already seen the show a zillion times, this kind of release scheme would annoy me much, much more.

I often kid (not kidding) that I want to have a big, celebratory, (not a little bit gay) funeral with this show playing on a big screen. I have loved this show since I first watched it on Showtime in 1982. And watching it again recently, I am seeing something really strong and meaningful about the show, especially as it is positioned between her earlier variety show specials and her soon-to-come movie career and power-ballad phase. I’m noticing a lot of new things, which is incredible because as I’ve watched the show a zillion times.

But more about all that when Cher finishes releasing all the songs. Before then I wanted to talk about the song published today, “Out Here on My Own.” For weeks I’ve been eagerly awaiting this particular song release and my enthusiasm has to do, I think, with my identification with the song as it is sung separately by Cher in this concert special and Irene Cara in the movie Fame.

I don’t go to Cher generally to find myself and I don’t go to Cher songs to find myself in the lyrics of those songs. I would make the case even Cher doesn’t even use her own music to see herself therein. Cher’s music does other things that are helpful and meaningful to us. Maybe other Cher fans feel otherwise and do see themselves in her narratives and musical declarations. But all that said, this is a song I do see myself in, so much so that a line in the lyric is in contention with one other song’s line for the eventual tombstone. 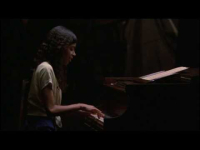 I’m always fascinated by how Cher’s versions diverge from other artists’ versions. In this case, Irene Cara whose character Coco, as you may recall, was a tough little New York cookie, self-assured as to her future in entertainment, seemingly more mature than the other students at the Performing Arts High School. However, Coco promptly falls prey to a sexual predator and her bravado tragically crumbles.

In the movie, this song is a moment of honesty for Coco. She has distanced herself from potential friends with all her bravado and although this is a love song, it’s also about reconnecting with the other artists around her in a more honest way. Cara gives the song raw innocence and then summons up a bit of courage at the end to sing “I may not win, but I can’t be thrown, out here on my own.” It’s very moving at the end of the song when Bruno reaches for her hand.

Cher’s version, on the other hand, is underwritten by Cher’s more experienced persona and the performative bravado of her new 1980s cool-chick self, as opposed to the newly-abandoned Hollywood party-and-glamour girl self, which was a previous shed from her wide-eye, innocent hippie self. This new Cher isn’t shy about singing with power. All the lyrics resonate differently coming from her; but then even so, there’s also a pleading ache in her delivery. She is still full of fear and doubt, wondering where she fits in. But her finale is much more frim. “I may not win, but I won’t be thrown,” (that’s the epitaph, right there). Notice the subtle difference between the words can’t and won’t, an inability and a refusal. Illustrative of what makes the two versions so character-specific. 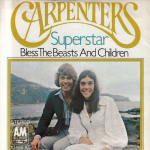 It’s interesting to see similar contrasts with two other songs covered by both Cher and Karen Carpenter. They both sang the Leon Russell songs “Superstar” and “Song for You” around the same time, the Carpenters’ versions were either more successful in the charts or better identified as a Carpenters song.

For years I have felt that Karen Carpenter’s more innocent rendition of “Superstar” was better because it showcased a kind of naivete and had a kind of misplaced crispness.

For the same reason, I’ve always liked Cher’s “Song for You” better (although Leon Russell’s own 1970 version is my favorite) because Cher’s voice contained more jadedness (already in the early

But lately I’ve come to appreciate Cher’s “Superstar” a bit more with its elevated, knowing pathos. I can now appreciate both versions like with “Out Here On My Own.” (Does there always have to be a best and better?)

I love Cher’s “Out Here on My Own” and when I hear it, I think, yes, I can see me in here. Maybe this is even a case where Cher herself relates more personally to the song, this being her first major concert tour or residence as an solo act without either Sonny, Gregg Allman or Black Rose.

The fact that Cher’s Broadway musical focused so much on overcoming insurmountable fears and Cher’s fears around those fears (with a Finding-Nemo-like prescription to “just keep swimming”) just makes this song
resonate all the more today. 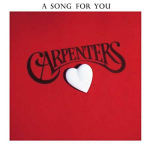 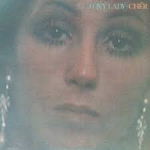 Foxy Lady album version from 1972, not released as single:
https://www.youtube.com/watch?v=gVHLPYIfzVE