Elijah Waits: The I'd Rather Believe In You Re-release 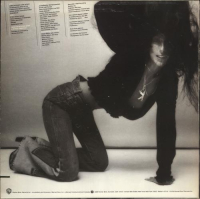 So over the last few months Cher has been releasing her lost Warner Bros. albums onto her YouTube channel. Most recently she released the 1976 album I’d Rather Believe in You produced by Michael Omartian and recorded at Larabee Sound when it was off a side street off the Sunset in Los Angeles. The album was recorded between January and July 1976 and released in October 1976.

Not many people talk about this album. After the lush rock covers of Stars (1975) and the album before she returned to Snuff Garrett and the somewhat kitschy narrative ballads of Cherished (one of my own cherished favs of childhood because you could act out all the songs), this album is a bit of a subdued anomaly. The songs are mostly pop, some struggling to be pop-rock.

The album cover is her best comprised of reused Norman Seeff photographs that were already a year old. She was currently pregnant and very large with Elijah and she even thanks him in the liner notes of the album for waiting until the day after she  finished recording before he made his big entrance. My theory is that Elijah's taste for music must be connected to his hearing his mother sing "Early Morning Strangers" in utero.

I collected most of Cher’s 1970s albums between the ages of 8 and 10 (1978-1980) and the rest of them by age 15 (1985). I distinctly remember finding this record at my local Venture discount store (it was our Target) in 1978. The store’s record area was four rows of bins and I obsessively checked them every visit for Cher albums (early magical thinking) and this was the first time I ever found one (magically!) and one I didn’t even know existed and it was sliced as a cut-out for 50 cents! What an amazing day!

Of course I loved the album, being eight years old. I loved the title song and my love for the song has not wavered to this day. It’s a perfect pop performance. And even my now-knowledge that Michael Omartian’s wife, Stormie, was a Christian writer and Christianity had a probable subtle influence on this record more than any other Cher record, does not deter my old feeling for this album.

This was not an album of covers, like Stars was. The only single released was the first track, “Long Distance Love Affair,” which could be seen as a song intended to beef up Cher’s rock credentials (a definite interest of Cher's) with its references to rock-and-roll bands and radio stations. And yet the lyrics also suggests her then-current relationship with Gregg Allman with its separations and work schedules. The song doesn’t provide a hopeful outlook (because after all, "you can’t send it through the mail"). This girl watches a lot of TV while her rock-n-roll boyfriend is gone and her needs aren’t being satisfied ("this kind of love don’t get nowhere"). The big issue here is that in reality Cher is also a star of the music biz (in her 3rd incarnation at this time). It’s like the old Cher adage only this time her mother recommends Cher marry a rock-and-roll man and she replies, “Mama, I am a rock-and-roll man.” It’s a busy production but I don’t hate it.

“I’d Rather Believe in You” was written by Michael Omartian and his wife Stormie (a Christian author who once dated Steve Martin back when they were kids working at Knotts Berry Farm) and later the song was turned into a gospel song by the Imperials in the 1980s, which Michael Omartian also produced. In light of recent moves toward extremism from many in the  protestant and catholic sects of American Christianity (especially during Covid and the oft-proclaimed dependence upon God over vaccines), the later-day version sounds much more ominous than was likely intended. The Christian version hasn’t aged well, let’s just say.

Again, this lyric also suggests Cher’s situation with Gregg Allman and drug problems he was, for a time, successfully hiding from her. Cher’s divorce from Sonny hit America and her kid-fans hard back in 1974 and they didn’t take easily to this new guy. This is a song about loyalty and Cher seems to be fiercely loyal for the most part (even after she breaks up with people). This song could easily be read as Cher's line in the sand about Allman’s bad reputation. Were these songs chosen to exploit Cher's current tabloid life? Possibly. But the thing about Cher songs is that you can’t read too much into them even when they accidentally might allude to things like Gregg Allman's heroin habit. She’s normally one step removed from her song choices, which is what drives those authenticators insane. But at the same time, this always gives her ironic distance (a sort of safety cloak) from her own material. Early on she was never given much choice in what material she recorded and this tone of distance probably carried over into situations where she did have more control over the material. Being autobiographical has never been a feature of Cher's recording career.

I’ve written about this song a lot elsewhere; it’s one of my favorite things in the world. I like the way the song builds, Cher’s softer sell…I go back and forth on the message. After all, Gregg Allman did show her differently which undercuts the defiance a bit. But then again I have always loved the lyric ”no paper here to bind you/only love to make you stay.” I like how Cher managed to balance vulnerability here with a cool delivery. Such prominent gospel backup singers are a relatively new thing too in Cher recordings. Some Jeff Porcaro goodness here.

The song "I Know" is actually a recognizable Barbara George cover. This song was my go-to aerobics song for arm circles. It’s the only song that survived throughout about 15 workout mix tapes. I like these r&b songs on the album (which are more funky and less gritty than Sonny's picks) and these first two Warner Bros albums are an interesting departure from the story songs which may show Cher’s changing assertiveness.

The song "Silver Wings & Golden Rings" is an “other woman” hookup song that retrospectively reads with Christian overtones in hindsight. He will always fly back to his wife. The song is almost catchy except that the wings/strings metaphor feels stretchy and there are…just a lot of words here. And you can just see this fellow gearing up to sing “Sad Eyes” back at her.

The song "Flashback" ends side one. Tom Jones records the song in 1979 and on a Merv Griffin Show performance of the song he claims it was never recorded before. Such is the life of the cut-out 1976 Cher album song. Her cigarettes have burned down to her fingers. I like the lower vocal and think this is a good performance but this is essentially the sound a 70s-trumped-up drama. “Chasing the sun we would run with a dream we could grow on.” I…have no idea that. But I do like the bridge.

"It’s a Crying Shame" is a song indicative of how I feel about this album. These are slick, well-produced pop tunes completely out of step with current radio songs and I remember listening to Cher's Warner Bros songs when I was 9 years old and thinking prescriptively “Cher should sing contemporary material.” Genius me. But now I look back at these musical anomalies and I’m glad we have them and honestly, I enjoyed them immensely at the time. “Not commercial” was something Cher heard so many times she named an album after it. This song is fun as it is.

"Early Morning Strangers" is a special track because it’s the only song I can think of (to this day) that Cher and Barry Manilow both recorded. I didn’t hear the Manilow version until I was about 11 and I was so thrilled I created my own rude-mashup on a cassette tape as a duet. You know, like everybody does today on youtube now (see the scary-sounding "Walking in Memphis" and the more normal sounding "I Found Someone").

The song was written by Barry Manilow and Hal David. Cher's version is better than his 1973 version simply because it’s hard to picture Barry Manilow making sad and jaded small talk with someone the morning after. Cher…you can totally picture that. This is another song that might have been picked to provide subliminal moral messaging about the perils of the loose life.

"Knock on Wood" is other great r&b cover, this one of Eddie Floyd and Cher stays true to his version. Amii Stewart would would explode the song into a disco classic (with Cher-like panache) in 1979. Cher never fully settles comfortably into this variety- show arrangement although the way she sings “woo-ad” is a golden cherism. And the way she sings “lightning and thunder” is completely reminiscent of Chi Coltrain’s “Thunder and Lightning” from 1973.

"Spring" is a melodramatic story about an unwed-mother (in a broken down apartment house, no less) who dies and her child becomes an orphan (if only that spare parent had been available) and the welfare lady comes and prays. If this isn't a morality tale, nothing is. But wait there’s a happy ending with an acceptable, traditional wedding in a beautiful church to another orphan. Even the grace of God is invoked and angels come. Hopes and dreams come true. Promises are made. There’s also a “wedding band of fashionable styling.”

"Borrowed Time" is about “living off the love of another man’s woman, that’s lovin’ on borrowed time.” She’s a train that stops at every station down the line. Moral of this one: don’t be a loose woman. It’s a ridiculous song but I love singing it so…there’s that.

Issues aside, I still say this was the best 50 cents I ever spent in my whole god-damned life.

Michael Omartian himself was also Christian (not only Stormie; it’s just that Stormie made a living at it.) He produced a lot of Christian music in the mid-70’s (I think Barry McGuire, for example) and even put out a solo Christian album around ‘73-‘74, maybe called White Horse if memory serves. I was a freelance journalist in the 80’s and Stormie told me that cocaine was such a ritual of record production that artists acted surprised and relieved when Michael turned it down; as in, “Oh, we can get right to making music? Cool!”

Hi Scott! How are you? Thanks for the insider info. I wonder if that appealed to Cher, Omartian's avoidance of cocaine. Cher tells a famous story that when Redd Foxx came on her solo TV show in 1975 he asked for some coke and she naively replied "we don't have any coke but we have dr. pepper." A fan on facebook told me today that Omartian was also Armenian.