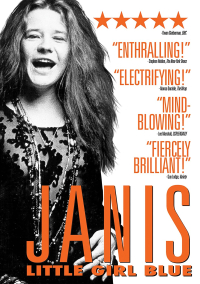 I watched the documentary Janis Joplin Little Girl Blue two weeks ago. I've seen quite a few Janis documentaries over the years and each one seems to be a bit more revealing, especially about her sexuality. In this one they interview one of her former girlfriends. I liked how this doc described her as a person with “Huck Finn innocence.”

Anyway, they spent a lot of time with the letters Janis wrote back home to her parents. I was really tired the night I watched this and so I couldn’t quite believe my eyes when I saw one of her letters with the word Cher scrawled on it.

Back when I was a kid perusing magazines at the local paperback bookstore, I got really good at finding the word Cher in columns of text on the pages of teen magazines. But that skill has waned considerably. So the fact I noticed this was unusual.

I did a freeze frame and read the full sentence and then really was even more flummoxed and had to ask Mr. Cher Scholar to confirm I wasn’t losing my mind. Then I looked up the sentence on google and sure enough…Janis writes,

“I don't really know what's happening yet. Supposed to rehearse with the band for the first time this afternoon, after that I guess I'll know whether I want to stay and do that for a while. Right now my position is ambivalent. I'm not at all sold on the idea of becoming the poor man's Cher.” 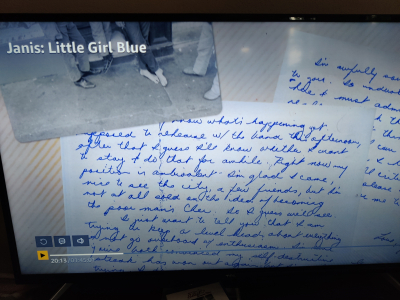 This letter was written on June 6, 1966 before Janis (a committed blues singer) joined Big Brother & the Holding Co. Meanwhile, Sonny & Cher are not yet a year into their fame as a folk-rock/pop duo. Cher has only released two solo albums by this point, basically folk-rock collections with a bunch of Dylan covers. "I'm not at all sold on the idea of becoming the poor man's Cher.” The idea that there is a sentence like this in the universe makes me insane. Janis was no more in danger of becoming a poor man’s Cher than anyone in the history of anything. And the fact that she thought this thought is just mindboggling. In fact, it’s hard for me to get my head around the idea of a universe where Janis is even thinking this much about Cher, both women are doing such completely different projects. But then you wonder if maybe there weren’t that many women for Janis to relate to. If you do a search for “1966 rock stars” on google, it’s a real boyfest.

On Britbox there a documentary about the last interview from John Lennon and in the middle of it there’s inexplicably a Cher and David Geffen picture. I think in this sequence they are discussing partying at Studio 54, as if this is an indicative picture of such things. 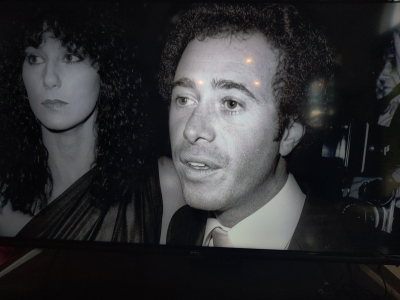