Cher Scholar Mix Tape: Covering Cher
Elijah Waits: The I'd Rather Believe In You Re-release

First things first, Cher has been rereleasing her classic 70s-era Warner Bros. remastered on her YouTube channel. First Stars was released a few weeks ago: https://www.youtube.com/c/cher/videos

Today her channel announced that I'd Rather Believe in You will be next, coming out in August: https://www.youtube.com/watch?v=oQc8H3CgeD8

This is happy news for fans who, although stocked with bootlegs, have been pestering for an official release for over two decades. The remastered Stars sounds pristine and hopefully the albums will someday be available on other streaming platforms or in physical form (with some scholarly words of perspective). Very happy July surprise!

In other music news, the single copy of the Wu-Tang Clan album with the Cher vocals on two songs, Once Upon a Time in Shaolin, has been sold by the feds. Follow the story here. The second buyer paid millions once again and their identity will possibly be revealed in a few months. The Wu-Tang Clan wishes that the album be played only in small groups for 88 years from the date it was first sold to the nefarious Pharma Bro back in 2015, which means most of us will not live long enough to hear it. That is unless the resale contract was interrupted by federal confiscation.

July has proven to be busy for Cher Scholar. I've started listening to KCRW again (lots of great stuff I’ve missed over the last five years I’ve been away) and I've thrown three small parties in as many weeks, and learned how to use my new braille machine.

For my upcoming birthday I received some meditation/introspection playing cards from a friend and the first one had the question: What makes you weird? I have a million answers to this but the one that pertains here is the fact that last Saturday I threw a Sonny Bono Recipe dinner party. And what's even more weird is the fact that it's not the first one I've thrown. I did it once before when I was 12 years old as a last-hurrah to my Sonny & Cher fandom, right before I decided it would be somewhat less weird in the 1980s to go solo with Cher.

But last Saturday I invited my friends Priscilla and Mikaela over and they were gamely willing to test out a few of these Sonny  recipes. Mikaela also came over to teach me how to use my new braille machine. The fact that I just bought a braille machine is also a little bit weird.

I made the recipe for Sonny Bono's Spaghetti with Fresh Tomato Sauce from The Dead Celebrity Cookbook by Frank DeCarlo. 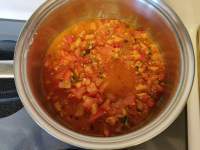 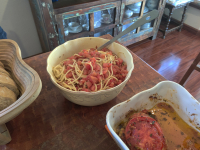 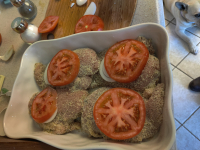 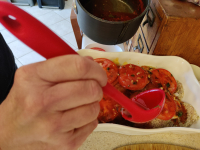 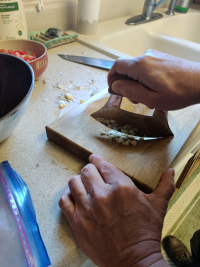 He made a vegetarian, fake-chicken version for me. 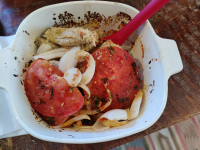 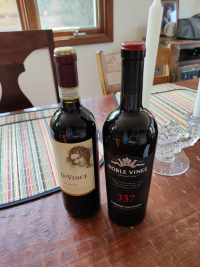 Cheap table wine: check. Everyone liked the results. The biggest critique came from me, which was to say the fake chicken was rubbery (but very tasty). Mikaela said the chicken was "fantastic, excellent" and she loved the spaghetti too. She said she especially loved watching the video I showed them before dinner of Sonny & Cher cooking on The Mike Douglas Show (thanks to Cher scholar Jay for that). Priscilla said she loved the Pollo Bono too and is usually very picky about her chicken.

Mr. Cher Scholar said, "I like his recipes because they’re authentic stuff made at home, not over-the-top elaborate. Simple ingredients. Simple process." Afterwards he said he would make it again for his brother. "It's not hard."

Alterations: Our chicken breasts were huge. Monstrous. So he ending up baking them for 50 minutes at 375 degrees. Spinning up the braille machine wasn’t so easy. Mikaela works at a school for the blind and she was able to bring me some braille guides. She showed me the basic concepts of the braille “alphabet.” We had a paper-loading issue which was solved by my googling "braille paper-loading issue" and getting the result "How do I load paper into the ^*#! brailler?"

Then we had an issue with the carriage return that caused us to take the whole machine apart, which Priscilla did with our drill. We all then looked at inside and provided speculative theories about the problem. Mr. Cher Scholar saw some "teeth" inside which needed to catch the return. He adjusted the margins and then it worked.

He usually avoids fixing stuff like an allergy so I asked him later what inspired him to do that and he said it was working with a manual typewriter all those years as a show-biz writer. So this was a real four-person team effort.

Then Mikaela taught me how to use the braille keys! Which are very cool and insanely complicated at the same time. I have to practice, she says, before I start typing out poems on the thing.

Another early birthday present I received yesterday was Celebrity Recipes, a newsstand publication from the 1980s judging by the big Heather Locklear, Linda Evans and Michael Douglas pictures on its cover. Anyway, on page 32 it claims that Perfect Pork Chop (the recipe I also have from Singers & Swingers in the Kitchen, The Scene-Makers Cook Book by Roberta Ashley) is actually Cher's recipe. 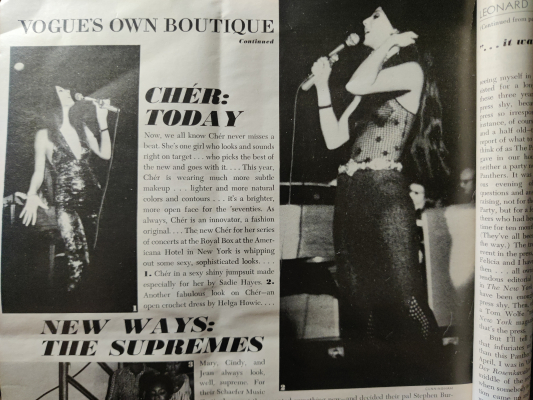 The following spread is from Vogue, September 1, 1971. This was the same year their first live album came out. while they were still on the nightclub circuit.

Their live album cover is unusual in that the gatefold only shows a large photo of Sonny & Cher facing each other, a kind of extravagant gesture for a gatefold of recording artists on the skids. The photos are also very shadowy and almost abstract, especially the front cover. 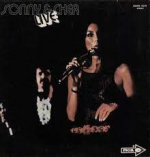 So it's good to see another shot of Cher in the album outfit and have it described by the scribes of Vogue magazine.

Posted at 02:48 PM in Cher Outfit Watch, Music, Scholarship In Action, What This Really Says About Me | Permalink | Comments (1)

Happy Birthday & glad your dinner was a success! Still hoping to find us a copy of The Mike Douglas Show of that same week where Sonny & Cher were suppose to make the other dishes when time allowed.