I went to categorize this post as "Television" but I don't even know what the word means anymore. Sigh.

Anywhere, there's been a ton of Cher content in the last 6 to 9 months. Here's a partial catchup. Last week Cher was on Dateline: White House with Nicolle Wallace. It was a great interview about Celebrity civic action and Cher and Dr. Irwin Redlener's mobile Covid vehicle.

Cher's documentary Cher and the Loneliest Elephant came out a few months ago on Paramont Streaming/Smithsonian. It's not yet available on other locations but hopefully it will end up on Amazon Prime or DVD eventually.

It was a very moving story, mostly focusing on the trials of Dr. Amir Khalil from the Four Paws animal rescue. Despite the title and trailer, Cher has only a peripheral role in the movie. Which is why it's good to also watch the For your consideration video which is a solid hour of Cher and the film's producer. It's an incredible behind-the-scenes conversation about the many of the challenges both Cher and the filmmakers experienced before cameras started rolling, many challenges not even mentioned in the documentary. You come away thinking it was a miracle the film ever happened at all, let alone the rescue itself. It shows the power of perseverance and Cher's mantra of not taking no for an answer (which is a mantra reiterated in all three video clips here).

The lightest appearance was HSN's Beauty Report talking about Cher's 2020-Fifi-award-winning new fragrance. Apparently the Fifis are the Oscars of fragrance. Far from saving the world with COVID vaccines or elephant-rescues, this kitschy girl-fest felt very personal yet still newsworthy.

In all the clips Cher says she loves the people she works on these projects and she loves making things. They discuss the fragrance's color (Cher doesn't like the whiskey look) and  the notes, the bottle corset with the little baby studs.

The whole thing feels like fun girl-time (no matter your gender preference).  Listening to fragrance nerds talk about smells is funny (and interesting) but funny. They ogle the purse-size's twist-top bottle (so it doesn’t leak in your purse). Then they bring out Theo Spilka from Firmenich Fragrance who says they went through 57 trials and it took 4 years with 2 perfumers working on it. He says Cher knew what she wanted and he

described her initial conversations about an Istanbul incense she liked and how she "rolled up her sleeves literally." He said Cher is so loved all over world Clement Gavarry (the perfumer) was able to get quality raw ingredients like:

Spilka says it's hard to verbalize what you want making perfumes, but that this perfume is 150% Cher.

Cher drops hints of some Christmas surprise that doesn't sound like a Christmas album although she admits she would do one. She says her favorite Christmas song is (still?) "O Holy Night."

Cher says she doesn't plan anything and that she was "talking to Herb Alpert the other night" and they both agreed that luck played a large part in their careers.

Cher tells a story about how she was told a woman with brown eyes and dark hair would never make the cover of Vogue. As we know, Cher soon afterward was on the cover of many Vogue magazines. She says charity blesses the giver and that she really wants to tour again but she wants people to be safe. She says, "I have as good a time as you do." David, the Cher fan talking to her right then says, "I don’t know about that." They talk about a nail polish bottle Cher helped designed for Deb, her manicurist. They talk about how Cher's mom is still stunning in her 90s. 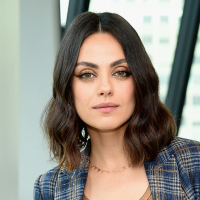 Cher's biopic was also officially announced recently and people are speculating on who will play Cher. Because Cher is completely inimitable, (as drag queens and impersonators have scientifically proven), this will be a challenge. Talented as she may have been, the Cher cast for the TV movie And the Beat Goes On, (yes, this will be Cher's second biopic), was completely off-the-mark.

For years I've been thinking Mila Kunis would be a good Cher although I have no idea whether she can sing or move like a groovy coolnick. She's got the comedic sense and she has a similar je-ne-sais-quoi quality, part of which is the deadpan Cher-stare.

Posted at 01:46 PM in Cher Product, Film, I Am Not My Hair (Inner Beauty), Scholarship In Action, Television | Permalink | Comments (0)