More Cher in Art and Literature
Updated: Cher and the George Floyd Tweet

Cher Is Reunited with Scooby-Doo 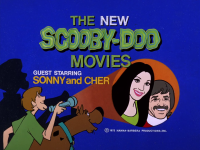 The last time Cher joined the shenanigans of Scooby-Doo and his friends it was October of 1972 and they were solving "The Secret of Shark Island."

There were a few notable aspects of this adventure. First, it has Sonny, who is a pretty good comic foil for the other characters (with his big ego and grandiosity). 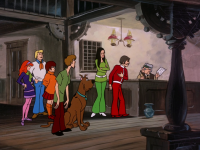 In this story, Sonny & Cher meet up with the Scooby-Doo gang while on their second honeymoon. Because Sonny is so cheap, he's booked them into a dilapidated, gothic haunted hotel perched precariously on a cliff. 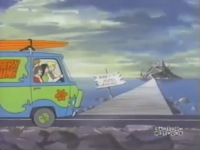 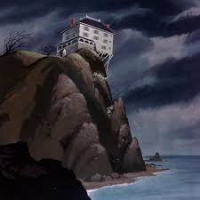 This is interestingly similar to their Cliff House sketches on their current hit TV show of 1972.

There's a ghost smuggler shark scaring everybody who turns out to be....well, I won't spoil it for you. But suffice it to say we all should have known something was up when the shark-guy starting running around the wine cellars on back feet. 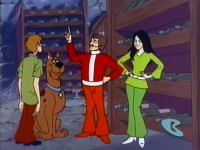 The way they drew Cher in 1972 she always appears with her hands on her cocked hips because that's the slightly annoyed, yet terminally hip stance she was known for having at the time.

The episode is also notable because it was as close as any one of us would ever get to seeing what Sonny & Cher looked like before they went to bed. I'm taking this very literally until evidence surfaces to show me otherwise. 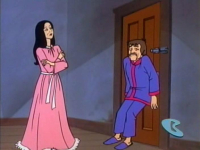 The whole thing is an ironic moment of fantasy anyway because Sonny never let them go on a vacation during this time, so busy were they with tv shows, records and concerts. I wonder if it was aggravating for Cher to pretend Sonny & Cher actually took vacations like this, even to dilapidated gothic hotels perched precariously on cliffs.

There have been about 101 manifestations of the Scooby-Doo franchise. I can think of about 4 incarnations in my childhood alone. Honestly, Scrappy worked my last nerve and I really didn't appreciate the watered-down celebrity appearances on a show that was originally a very scary series. I watched the headless horseman episode with the afghan my grandmother crocheted for me stretched over my head (for protection) and I peaked out of the yarn holes. It was great.

All the big names of the day appeared on the show. like Don Adams, John Astin, Tim Conway, Sandy Duncan, Don Knotts and even Cass Elliot. As I said, I preferred the closed circle of the original five without the hobnobbing riffraff. I actually had no idea Sonny & Cher made an appearance until I saw a rerun in my teens.

Now the episode is available on DVD and Blu-Ray.

So flash forward a zillion different Scooby-Doo tv shows and movies later and the latest incarnation is Scooby-Doo and Guess Who? another celebrity filled series. Cher appears in a season 2 episode called "The Sargasso Sea" (which keeps reminding me of the novel Wide Sargasso Sea). For some reason, this episode is not yet available in the U.S. but has been shown in Turkey, Canada and Australia.

But don't worry because the seasons look like they eventually end up on Amazon Prime and DVD.

There are copious screenshots already available online and I'd like to review them here.

First of all, for some reason Cher looks younger in this episode created almost 50 years later. It's a goddamn miracle of science.

Secondly, it appears in this episode Cher apparently owns the yacht depicted above, which feels a bit too much living like the Burtons for someone who helped turned the tide of the new thinner, bohemian woman in the 1960s away from full-figured women like (but especially) Elizabeth Taylor. As a couple, Sonny & Cher were also the anti-Liz & Dick image-wise, their pseudonyms Caesar & Cleo aside (I mean, it wasn't like they were Antony and Cleopatra).

And you may remember there were scuba-villains in the 1972 episode.

Well, this episode has both a Scuba-Scooby and a Scuba-Cher!

This production can't get here fast enough, as far as I'm concerned.

The celebrities on this series are again a good snapshot of the day, but maybe skewing a bit cooler with stars like Sia, Steve Buscemi, Ricky Gervais, Gigi Hadid and Neil deGrasse Tyson among others.

Not only does Cher reunite with the gang but with another Shark-villain (with two feet). Cher even refers to her first appearance, which is a comforting bit of symmetry for Cher scholars out there.