The Cher Hot Sheet below was created as fan art by The Hot Sheet on Twitter. What a great piece of data visualization!

Years ago the visual-data software company Tableau gave a demo to Central New Mexico Community College and included an amazing public interactive visualization of some Beatles data with headings like What Are Most of Their Songs About and Which Songwriter Has the Largest Vocabulary. You can even roll over their cartoon heads with your mouse to see which Beatle wrote which hits. Big data, maps, trees and graphs! Nerdy fun! It was so awesome in fact that CNM couldn't afford it. But I always hoped someday there'd be a Cher Tableau.

The Cher Hot Sheet below is the next best thing: albeit static, it aggregates the data (which is some kind of objective reality, you have to admit) and continues to beg the question as to why artists with lesser numbers are in the Hall of Fame but not this stealthy trailblazer. 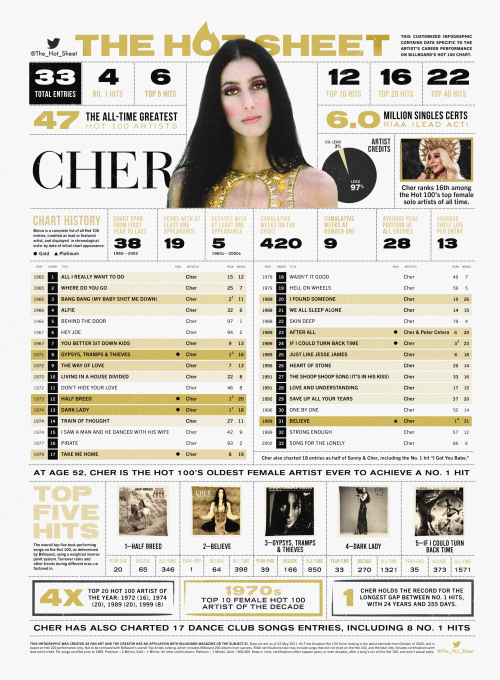 In my mind the relevant numbers are this:

Thank you, Twitter Hot Sheet person! This is an invaluable contribution to Cher scholarship.

But rock-and-roll isn't about numbers, Missy. It's not all about sales and breaking records. I hear you.

Then your suggesting it's about another kind of influence metric like inspiring other artists?

To which I would say,

I loved Cher's appearance in this video although I would have preferred she be cast as something on the level of the protective pookie-bear, something short of a God figure, the religiousness of which undercuts the influence argument by being too much worship. And a little less spouse abuse would be nice, although this is probably meant to be a metaphor or hyperbole, both of which are sometimes lost on people unfortunately and are dangerous to use in conjunction with violence.