Cher Is Reunited with Scooby-Doo
Cher, Big Data and Influence 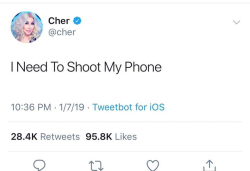 What are the odds that the day I posted this summary of the Floyd tweet,  Cher would get embroiled in another Twitter-snafu (another Twitterfu)?? All you have to do now is google "Cher apologizes" and there you get:

You kind of think maybe Cher should run all tweets by someone and then you think, nah, this is better. Uncensored Cher is a better thing.

So it’s time to blog about this year’s Cher twitter controversy (or this season’s maybe). I've been putting this off until I could get my thoughts written out. And I was worried I wouldn’t get it right. But this fear of saying the wrong thing can't shut the conversation down so here we go...

Cher divides Twitter wondering if she could’ve prevented George Floyd’s death: ‘Maybe if I’d been there... I could’ve helped’

And this rough read for a Cher fan: Cher’s George Floyd tweet of white fantasy is part of a dangerous pathology

During the murder trail of police officer Derek Chauvin, lots of people around the world were expressing horror at the details of George Floyd's gruesome death. Cher herself said this: "Maybe If I'd Been There,...I Could've Helped." Some tweeters (both white and people of color) defended Cher and others expressed disgust and annoyance. Some examples on both sides:

“Oh yay another White person centering themselves around blk ppls pain. I wish I was there to stop you from tweeting this.” (@Iconiecon)

“If I Could Turn Back Time, I would stop Cher from tweeting this.” ( @geeta_minocha)

“I mean — maybe she could’ve helped. We’ll never know. Lots of us wish we could’ve done something to change the outcome. Lots of things to be mad about but this tweet ain’t it.” (@flywithkamala)

“She could have worded it differently but I think her intentions were true. She wishes she could have helped. She’s an ally. People need to let this one go.” (@CDonatac)

As part of the turmoil going on last year, the company I consult for provided us with free LinkedIn inclusivity training. One of the people who really impressed me was corporate trainer Mary-Frances Winters and so I bought her book Inclusive Conversations, which I’m still in the middle of reading. Anyway, she talks about being an ally for your co-workers who feel marginalized and she says being an advocate as a white person means more than silently supporting them, but actually speaking out on their behalf, among other things. And for this to happen, we all have to create a safe space and have patience when people make mistakes while speaking out. If not, advocates won’t speak out and our friends will feel completely or inadequately supported. Allies can't be too afraid to say something wrong.

I feel Cher has always been an objectively strong ally, albeit an imperfect one. She has always braved the trolls on Twitter and spoke out for communities in distress. She makes mistakes yeah. Unfortunately on Twitter, groups on the extreme right and left have a zero-tolerance outlook that makes allyship particularly harrowing. It’s to Cher’s credit that she hasn’t stopped for long. She just apologizes and perseveres.

That’s not to say white savior syndrome isn’t a real thing. Just watch some well-meaning white suburbanites descend on an inner-city school with a list of sure fixes, with no comprehension of the experience of poverty or diverging cultural factors. White saviorism is a thing. It needs to be checked. But there are worse things. Much worse things.

This is also not to say celebrity narcissism isn’t a real thing. Cher has admitted her own narcissistic tendencies and I for one believe she does better in this area than many other celebrities of her stature and iconic, practically mythmaking, category. She was just cast as God in a Pink video. For the love of...

And some of that was probably all in that tweet. But it’s not all white savior celebrity narcissism. They way we can tell is to replace George Floyd in the tweet with an Armenian or a white woman who was murdered. Although this isn't as likely and this scenario is not part of the national crisis, it does happen and we can explore the whole tweetstorm again in this light.

There is this very human element in play, one not based on race, gender or orientation, a human ideal we’ve all had in the fantasy crisis of our own mythmaking minds, this absolutely firm belief, especially strong when we were young adults, that we will be the kind of person to help a person on the street, a person who would stop for an accident on the road, someone who would rescue all the lost dogs in the neighborhood.

But then decades roll by and you see all the accidents, street dramas and wandering dogs you didn’t help. There are reasons: you once heard a story about that guy who got shot helping a stranded motorist, maybe the dog isn’t lost by a free-roamer, and are you going to get yourself killed doing this Good Samaritan thing? The mind scrambles with doubt when the situations actually present themselves. The hard, cold fact of life is that enough of us don’t stop. We all feel this commitment to stopping but stopping isn’t easy. We need to learn to do this. Bravery needs to be modeled and learned, the same sad way we’re now learning to throw our cell phones at madmen in Active Shooter training.

So I greatly sympathize with Cher’s impulse in the tweet, which ultimately all feels sadly human and heartbreaking.

It goes all the way back to our response to tragic fairy tales like Hans Christian Anderson’s “Little Match Girl.” Surely this girl would not have frozen to death under our feet. I used the Anderson story to process this whole situation in a poem for NaPoWriMo 2021: marymccray.com/napowrimo-2021-by-mary-mccray.html#april7

Didn't she deal with prejudice growing up herself as a mixed race Native American? Sort of nullifies the hateful comments and white privilege comments.

Hi Tess! Good question. Cher's recently taken some flack over her claimed Cherokee heritage and the Half Breed Bob Mackie outfit from her show from mostly younger Native Americans. I don't think most people realize she's half Armenian and a mixed-race person. I agree that fact should come into play a bit more. I think the essay by Stacey Patton (a young writer who has little history on Cher's cultural work) focuses also on Cher's situation as a wealthy and insulated Hollywood woman. But I would argue even the wealthy and insulated among us cannot afford to not speak out at this time. Maybe they are clueless about many people's day-to-day lives but Patton undercuts her argument at the end when she declares, "There are so many ways to be a white supremacist" as if Cher is one. Clearly, this is incorrect and the mistake of misspeaking about one's sympathy to a situation and racial supremist violence (with all its intentional hate) are on two different scales. And to not be able to tell the difference is as "problematic" and "pathological" as anything Cher has ever tweeted.