Cher in the Time of Covid 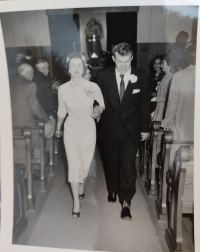 So where the hell have I been? Well thanks for asking. As I said in my last post, my 80-something parents (right, 1958 in Carson City, NV) came down with Covid in Cleveland mid-November. I spent the end of December through the beginning of February (alternating with my brothers) helping them get back on their feet. When my mother was on death's door  back in November, I promised her that if she made it home I would learn to cook (finally, after 50 years) and make her a bunch of Hello Fresh dinners. And that's what I did, in the process learning the many joys of a bubble whisk.

I anticipated catching up on all-Cher-things while I was gone but that did not happen. In fact, the whole experience made me question fandom entirely (and not for the first time). I asked myself what purpose it serves, does it make my life better, does it make the world better? And because of all of the most recent events in the world, the answer was a soft no. Not that much different from stress shopping, I figured. But then I came around to the idea that in some way, like a carrot on a stick in front of a mule, it gave me something to look forward to, some relief of entertainment just slightly up ahead. And that was comforting in the trenches of things.

I will be slowly catching up over the next few months. So much has happened, first of which was the video release of "Stop Crying Your Heart Out" which I loved. Although I could not follow it's directive, I really loved the perfectly-edited video, which felt oddly cohesive considering all the personalities involved:

You can still donate: 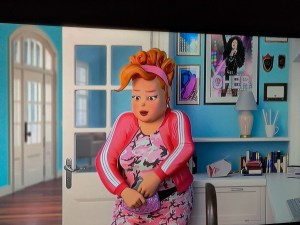 Then last weekend I finally watched Bobbleheads: The Movie:

This felt like a watered-down Toy Story with bobbleheads. There wasn't much background on the cartoon family but that the parents were theme park designers in a world that looked like the cheap cousin of Pixar. But this is a good movie for kids under ten (and hopefully Cher’s brand can successfully extend into this demo).

Some oddities: these were scary parents who kept a fish tank on the coffee table and no baby gates at the top of the stairs, fully expecting their tween daughter to deal with it. There was also a Cher poster inexplicably in the office. Who is the fan here? The wife, the husband, both?

The story is basically the bobblehead toys avoiding pitfalls in the house like  a visiting dog and nefarious relatives squatting there. Lots of references to collectors of the bobbleheads and collector culture. There’s also a sub-world bobble creed and anxiety around the toy's relationships to their real life prototypes, some protos who have let down their bobbles and some protos who bobbles cannot live up to.

This is where it gets weird because Cher is a real life prototype to her bobble equivalent (meaning she really exists in real life) but the other bobbles are fictional characters to their fictional prototypes. The rules of the world bobble here. It probably would have been better for all protos to have been fictional.

Cher’s bobble appears in spaceship (in reference to her big concert entrances) at the toy's darkest hour and gives the group a mentor of bobblishiousness (very similar to her role in 2017’s Home: Adventures with Tip and Oh and even in Mama Mia 2 to some extent). She comes as a representative of The Bobble Council.

These are flat roles that are getting old for fans but maybe helpful in introducing Cher’s brand to new generations. This makes me wonder if this is what it felt like for original fans of the great Mae West getting flat 1970s facsimiles in later years.

All that said, there are still some good messages here. Cher clarifies the bobble creed: "Bobbles bobble and bring joy" which sounds a bit like Cher's own entertainment ethos. She also has this good advice: "Don’t be prototypes, be you." Then she tells the cat he’s one of a kind and to embrace that. "That’s what my proto did,” she says.

Over the credits, Cher’s bobble tries to teach the other bobbles to be dancers in her live show. They’re all flat feet, so to speak.

After listening to the Cover Channel on SiriusXM for a few years, they finally played a Cher cover, "Bang Bang" from the Icelandic band Kaleo. It starts slow like a lot of the Sinatra-esque versions already out there but then it starts to veer away with new embellishments, then unfolds into its own unique, less controlled thing. Great cover.