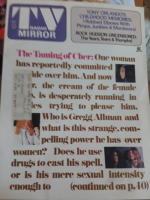 For my birthday, my friend Julie sent me this tabloid magazine TV Radio Mirror from November 1975. It's a good sample of tabloid coverage of Cher in 1975...

...with the exception that this one has a crazy cover of text, so tickled were these editors with their story they used actual newspeak verbiage instead of pictures. The gravitas of the gesture!

"The Taming of Cher: One woman has reportedly committed suicide over him. And now Cher, the cream of the female crop, is desperately running in circles trying to please him. Who is Gregg Allman and what is this strange, compelling power he has over women? Does he use drugs to cast his spell, or is his mere sexual intensity enough to (continued on p.40)."

That’s the cover! And make sure not to miss “Tony Orlando’s Childhood Memories: I rubbed elbows with pimps, junkies & murderers!"

Or "Rock Hudson Uncensored" (I'm pretty sure this 1975 story was completely censored.)

Wow. Just Wow. But it doesn't stop there!

This issue is interesting in a few ways. One, it gives more detail about the Jenny Arness tragedy because it had just happened. So this article includes a bit more about how her family was doing (not good). For those who don't know, this was a very sad story about how Gregg Allman’s prior girlfriend committed suicide.

Secondly, it's interesting how the writer, Amanda Murrah Matetsky, treats the idea of female self-agency and being in love (there is none). The article details the tumultuous first months of Cher’s relationship to Gregg Allman and then dives into speculation. 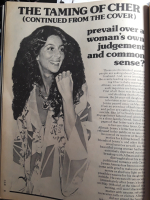 To be sure, Gregg Allman was so different than Sonny, everyone in America (including fans) were having a whip-lash moment. So the struggle to understand is maybe understandable but the dated-sexism is still pretty shocking. She says,

“He must have some kind of power over her and his mere presence in her life to muddle her head so effectively.”

Then she speculates about their possible drug use (to explain it all) and Cher's having just saved the life of Alan Gorrie of the Average White Band at a Los Angeles party on September 23, 1974. Read more about that: https://en.wikipedia.org/wiki/Average_White_Band

But then the writer changes her mind to say,

“But Cher is probably too smart to succumb to any of the lures of the drug motivated (or unmotivated) culture….it is far more likely that our heroin’s head has been turned around by love—or sex (or both!!). It is most always through sex that a man gains his initial power over a woman....How long can Allman’s power last. For the present, Gregg has tamed Cher—just as one of Shakespeare's immortal characters tamed the proverbial shew. But there are those who feel that it’s just a matter of time before Cher slips through Allman’s musically talented fingers...When asked if he’s planning to marry his new girlfriend, Suzi Cuelho, Sonny Bono answers, 'We’ll see how it goes. I think I’ll let Cher get married a few more times first!'"

Invoking Shakespeare and Sonny Bono in the same piece. Who would have thought? The article then goes into speculating that this is a rebound relationship or fueled by Cher's mother’s many divorces and the kinds of statements Georgia was giving to the press at the time about marriage ending loving relationships…comments which our author is very critical of:

“Since this is the kind of motherly advice Cher receives, we shouldn’t be surprised if she has filed for another divorce by the time you read this.” [She didn’t.] 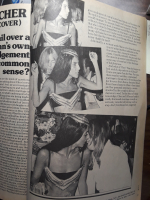 The article talks about the $24-million dollar lawsuit Sonny has pending against Cher and David Geffen. And yet Sonny tells the press,

“I talk to her all the time. We’re closer than anyone will suspect.”

The article then discusses how Cher missed the first week of taping her new season’s show due to being in Buffalo “patch[ing] up her marriage.” [Allegedly, Allman was really in rehab in Buffalo at that time and Cher was lending support.]

The article ends by directly hinting to Cher that she needs to focus on her TV show more and avoid the pitfalls of Jenny Arness. Yikes!