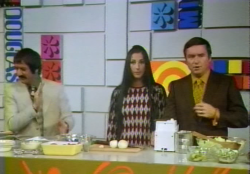 Recently Cher scholar Jay notified me about the October 13, 1969, episode of The Mike Douglas Show where among other things we "learn to cook Italian” with Sonny & Cher. We got to discussing Sonny's cooking and I went on an online scavenger hunt for Sonny's recipes.  I collected all I could find for a dedicated Sonny's cooking page.

In this episode Sonny & Cher sing “their theme” "The Beat Goes On" and Cher sings "Just Enough to Keep Me Hanging On."  She's not hanging her hand yet but she occasional snaps her fingers. They also sing "What Now My Love" and Sonny smiles too much for that tragic song.

Cher wears a patterned mini-dress with red hose and has white nails and her bangs have grown past her chin. Her hair is very long! Sonny is in a suit because he says is now rebelling against the “hippie uniform” He says it’s his first suit in 8 years. Cher picked it out, she says. Sonny says he doesn’t like picking out his clothes.

Douglas tells Cher she doesn’t “exude much” and he wonders if she likes the showbiz. She says she enjoys it but “not to the bubbling point.”  They talk about Cher’s bracelet and how Sonny & Cher met. Cher says she set up her girlfriend with Sonny but her girlfriend didn’t like him but Sonny liked her girlfriend. The girlfriend and Cher ended up moving close to Sonny. Sonny says you have to like your mate when you’re together 24-hours a day. How did he propose, Douglas asks. Cher said Sonny asked her “where are you gonna ask me to marry you?” Proposals are more conversational now, she says. On bent knee…”that was a million years ago,” Cher says.

Sonny talks about working as a gopher for Phil Spector (the best producer in the biz, he says) and how hustling records takes political influence and that he was well-liked by LA DJs. Douglas notices Cher’s eyes are never off Sonny when he talks.

Also appearing that day are the Ramsey Lewis Trio and Selma Diamond (remember she was the first Night Court bailiff) . She keeps making remarks about Sonny’s sexuality. She says “he showed up ‘straight’" (she means his gender-bending clothes) and when Cher says she once had a dream she was a fairy,  Diamond turns to Sonny and asks “how ‘bout you?” Not cool. Diamond then tells some unfunny jokes about the British Royal Family. Marty Brill is also on the show. I had to skip over his stand-up act. Then a football player comes on. Sonny likes to talk to each guest about their line of work.

During the cooking segment, Sonny tells Cher to be careful while she chops onions. Douglas acts silly. Do you cook at all Mike? Cher asks. He says no. "Men make the best cooks," Cher says. Sonny says he likes to cook. Douglas says the dish smells Italian and complains about garlic on his fingers. Cher says "Italians just have that natural odor anyway" which gets a huge laugh. Douglas is shocked but he's been making borderline offensive comments himself.

Cher says she enjoys Sonny's cooking. "It’s really good. It’s really groovy." Two more courses are promised later in the week.  "He always gets to do the artistic stuff," Cher says,
"I always get to do the crummy stuff."