And The Thing Was Done (Cher Puzzling) 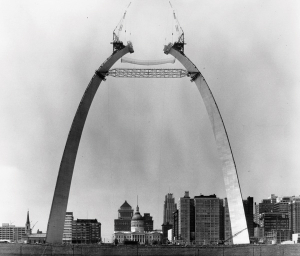 There's a famous local film they once played before you went up into the Gateway Arch in downtown St. Louis, Missouri. The documentary, called Monument to a Dream, was made in 1967 and my friend Julie and I often made fun of its final gravitas in the last scene where the narrator says:

"By strength and skill and valor they rolled the unknown back before them. They were too weary, uncomfortable, and much too seasoned to rejoice. But the idea in the restless mind of Thomas Jefferson had been given flesh. Meriwether Lewis’s dream had come true. And the thing was done."

If you grew up in St. Louis you knew this by heart ("and then the thing was done!") because every cousin and distant relation was trudged up that thing during a summer or holiday visit.

Well, I felt the same pride and gravitas when I finished my Cher puzzle. But full disclosure, I built not a single steel inch of that St. Louis Arch and I didn't put together much more of this Cher puzzle. Fortunately I had an obsessive puzzler in the house who couldn't leave it alone.

And then the thing was done, suddenly last Monday afternoon, three weeks after it started. Mr. Cher Scholar said it was the most difficult puzzle he ever did. I asked him if he thought the good people of Cher Queendom planned for it to be one of the hardest puzzles ever created or if they were just offering up the latest plug on a Cher single. He guessed the later. Other heavy puzzlers I spoke to, like Julie above, suggested they might have lost faith during the long white blizzard of the puzzle's four corners. But Mr. Cher Scholar refused to be defeated by it.

Here's the timeline of our progress: 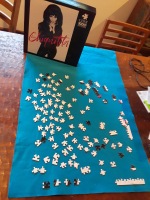 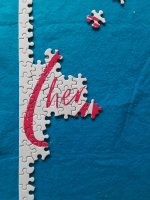 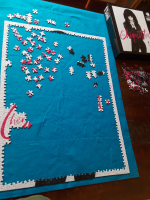 We finished the copyright notice first. Mr. Cher Scholar then finished the border. I did the Cher, because I've always been good at finding her name in a puzzle of words on a page. It's one of my very impractical, some would say pointless, superpowers. 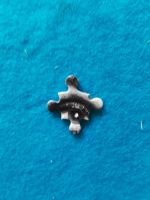 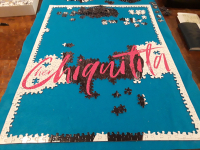 Then we started working across the word Chiquitita in the middle because it was all pink. During that process when found The Eye of Cher! 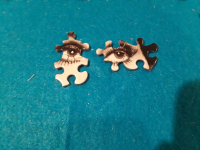 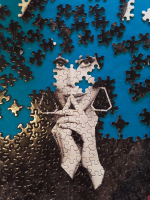 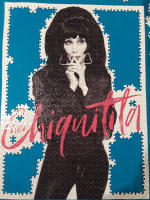 Soon we found the other eye. We then started with the legs.  Mr. CS finished the body and hands. I did some of the bouffant, the eyes and the earrings. My favorite puzzle pic is her face with the exploding black hair. 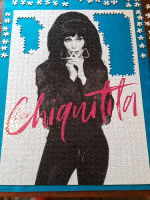 The white parts were truly challenging, sometimes maddening. I organized them all by shape size: little huts, human people, Gothic crosses, simple crosses, turtles and malformations. Mr. Cher Scholar then spent about a week and a few days finishing the corners.

Puzzles are somehow comforting during this time of Covid and nasty politics. We've now done a Chiefs puzzle and a Cher puzzle. Next up is a puzzle based on the Agatha Christie novel Poirot's Christmas. The box includes no picture and reveals the novel's killer. Err. That sounds hard.

I want one where did you get it?

At the Cher Store: https://cher-shop.com/

Reading this Puzzle Piece I felt I was reading a horror novel. Think Frankenstein.