Cher Once Did Needlepoint; Now She Valiantly Defends the United States Post Office

Excuse my title up there. I really didn't know how to tie all these disparate stories together.

First off, fans have been delighted to see Cher fighting for the U.S. post office in recent protests, phone calls and Twitter pics. 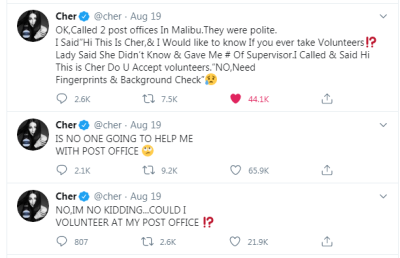 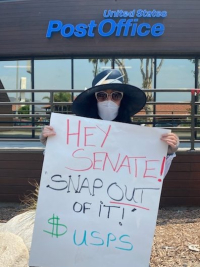 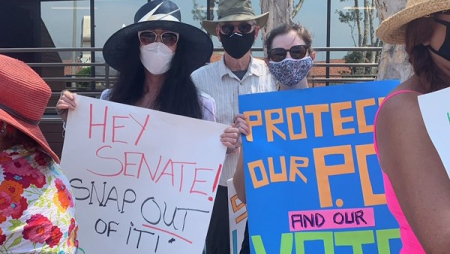 I hope if she starts volunteering for the post office, Bob Mackie designs her some "sensible shoes."

Months ago someone was requested photos of celebrity needlepointers like Dinah Shore and Rosey Grier. I found as many as I could but one photo I remembered proved elusive to locate. Then Cher scholar Drew asked me a question and I went searching for the answer to that but instead found the missing needlepoint pic. Maybe someday I'll locate the answer to Drew's question while I'm looking for something else.

Anyway, Cher once did lots of needlpoint. She did so much she joked, "Then I took up needlepoint—my God, I needlepointed everything. I could have made a needlepoint stove!" 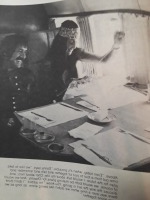 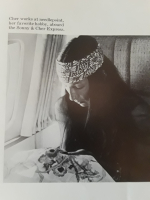 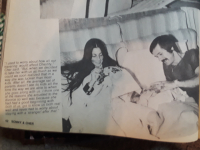 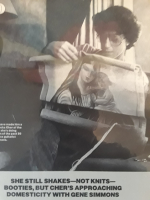 I also captured an image of Sonny pretending to needlepoint in episode #49 of The Sonny & Cher Comedy Hour: 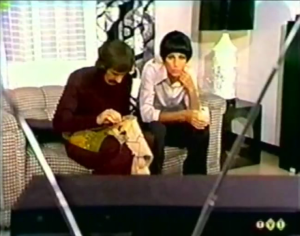 And here are some needlepoints of Cher: 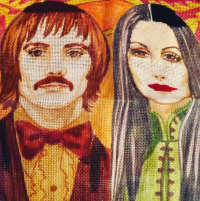 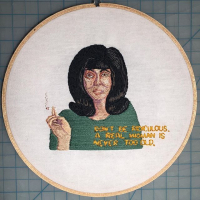 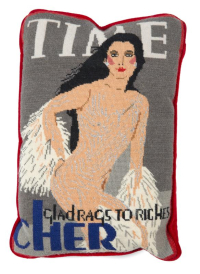 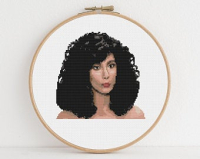 The Time Magazine pillow belonged to Bob Mackie and sold for $448 on Julien's Acutions.

You can buy the Moonstruck needlepoint pattern on Etsy with a companion Nicholas Cage!

What is a Silkwood Shower?

For the Chersonian Institute, I was filing old magazines and found something interesting. Remember when Entertainment Weekly did a Bullseye pieceon the last page? Do they still do that? Anyway, one I found had a disparaging arrow regarding a rumor that Bret Michaels and Miley Cyrus’ mom were dating. ET says the rumor has sent them “running for a Silkwood shower.” Ok, that's a big rude. And I wondered if that was like…a saying. Apparently it is. Urban Dictionary has a listing for it with this example:

“I had to take a Silkwood shower when I got home from that party since I smelled like an ash tray cooked on an open flame BBQ grill covered in hot sauce.”

So "snap out of it, Moonstruck eggs and the Jack speech are not the only iconic references from a Cher movie.

Here are some shots of a Silkwood shower. It's a pretty serious and scary thing and Meryl rocks it (as did Sudie Bond earlier in the movie). 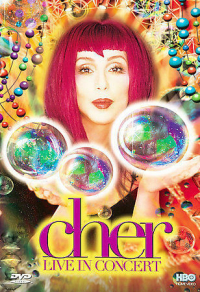 Concert reviews have changed. I've learned this lesson over the last year from various sources from current reviewers and from the deceased reviewers. Is this overwhelming evidence of capitalism taking over PR? Probably. Which is no such a great thing. Buyer beware, there are no objective reviews in the land of corporate conglomeration.

So it’s good to look back at a positive review and interview from 1999 (when bad reviews still existed) and this one was by T’cha Dunlevy at the Montreal Gazette is one of those. She was 30 when she reviewed the Believe-era concert and said she

“regularly feels aversion to refuse-to-die ‘60s rock acts. I had no convulsions of revulsion at the Camp Queen’s coup. Maybe it’s her synthetic, timeless beauty or her go-with-the-flow versatility, but Cher has somehow kept her proverbial cool over her three-and-a-half decades in the spotlight…a repetoir of personae, including pop-ditty princess, serious actor, 'I’m-in-love-with-a-man-half-my-age' bachelorette, reactionary mother of a lesbian [remember this was 1999] and, in her 50s. back to the top of the pops without coming off like a circus side-show act.”

“...'How many fingers and toes have you got?’ she asks, queried about whether she’s ever thought of giving up. ‘(It happens) all the time. It’s frustrating. I’m a very mercurial, emotional person, more childish sometimes than grownup. I’m not very calculating. But it’s the only think I know how to do and really love.’”

The end of the interview also notes that both Cyndi Lauper and Wild Orchid were opening for Cher at the time, the same Wild Orchid that produced Stacy Ferguson a.k.a. Fergie Duhamel a.k.a Fergie of the Black Eyed Peas.

Posted at 11:40 AM in Cher in Art & Literature, Concerts, Film, That's The Obsession Talking | Permalink | Comments (1)

I remember hearing an interview on some AM Canadian radio station in probably late '79 where they mentioned she was doing needlepoint in her Las Vegas hotel room. She was extremely relaxed and low-key. They asked her about Two The Hard Way and she said she didn't think it was a great album but she thought it was a good album and she loved singing with Gregg. She was trying to remember some of the songs on it and even sang part of Do What You Gotta Do during the interview.