On July 13, 1985 I did not, unlike every other kid in my High School, actually watch Live Aid (all day or for any part). My fan favorites weren't appearing. But since all my friends were at home watching Live Aid on July 13, 1985, I remember being very bored that whole long day. As I was trying to watch other TV, I kept running in to Live Aid and feeling very annoyed. Later, I got the Live Aid book and realized Cher was actually there.

Picture from my Live Aid book of Cher lounging backstage. 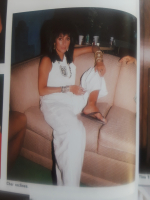 Apparently Cher was on the famous flight Phil Collins took from London to Philadelphia (so he could appear at both locations) and she asked him what all the hubbub was about. He was like, if you don't know already...and then she asked if he could get her into the event and he basically told her to show up and she'd be let in. (Cos she's Cher dammit!) Anyway, his story has more detail but the moral of the story is that she got herself into the finale.

Here are some screenshots of her singing "We Are the World." She comes and goes very fast. Here's video. (Don't miss Patti LaBelle!) 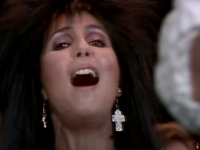