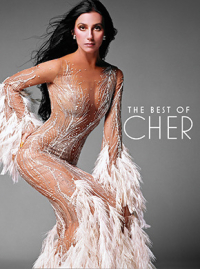 So the new Cher TimeLife set is out (thank you to Cher scholar Michael for alerting me to this).

These TimeLife sets come in two tiers (cheaper and much less cheap). When I received the first set, I enjoyed the booklet and the extras. I was disappointed that there was only one episode I hadn't seen before and that one was edited. But I was looking at it from an uber-fans POV. Also, I didn't rightly consider the episodes of the solo show that I hadn't yet seen in full, having seen only 1/2 episodes from VH1's most welcome rediscovery of Cher in the mid-1990s. So I finally sat down this week and compared all the sets to each other to see what we have here. If you've bought the original Best of Sonny & Cher series and don't consider the remake version in the Cher bundle, you'll miss out on a few extra episodes of Cher.

The Best of Sonny & Cher – version 1 (2019)
You could bundle that with the a Laugh In box set which had only one Cher appearance on it (but that one was very good). It looks like the current bundle is with Carol Burnett Show lost episodes.

In fact, this discrepancy made me review all the Cher shows with more attention and I have to say, I’m more excited about them than I was at first. I’m not going to list out which DVDs have which episodes because you can see for yourself on the respective links above. I'm just going to survey the bigger picture, which episodes are new, which are mostly full episodes (unless they've cut skits) of shows we’ve seen on VH1 (1990s) but not on Get TV (2010s). 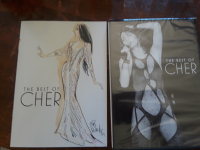 The booklet is completely different, about 30 pages with different fonts and layout and many more pictures focused on Bob Mackie drawings and some historical photos of Mackie with Cher. There’s a new “feature” extra called "Cher: Then and Now" and some extras around the Mirage and MGM TV specials. This is first legitimate release of the 1978 and 1979 television specials and that’s a big deal. Someday I wish we also get official releases of the Monte Carlo and Celebration at Caesars concerts as well. There’s also an extra of one of the James Corden appearances, a Believe-era interview, and her Superbowl appearance. The rest looks like recycled shows and interviews from the S&C V1 set.

Sonny & Cher –Version 2 (2020)
There are 5 Cher episodes on this set too. Only 1 is a duplicate (from The Best of S&C V1) and 4 are unique to this set. All the Sonny & Cher Comedy Hour and The Sonny & Cher Show episodes are the same in both S&C V1 and V2.  The bonus features seem all the same as well. The booklet is only 27 pages and excludes the pages about the Cher show.

Taken all together there are 7 full Cher episodes on these sets that have only previously been aired on VH1 in half-hour segments. There are 3 episodes that have never been re-aired since the 1970s.

I'm looking forward to watching all the new Cher episodes when it comes time to explicate them like literary texts on Cher Scholar.

Posted at 08:50 AM in Concerts, Scholarship In Action, Television | Permalink | Comments (2)

i've tried to figure out the words "Collection" and "Deluxe Collection" in buying the Time/Life
Series' on Cher/Sonny and Cher. Could you please tell me which ones I should buy, inorder, to
get everything offered?
I, even, see where a 5-disc set on Sonny and Cher is being offered on Ebay.

Hi Jimmy, If you get the Cher collection with its particular S&C bundle (2020), you will get all the episodes. That's the only way to get complete coverage. Ignore the first S&C package from 2019 and buy the Cher/S&C bundle.

All the S&C episodes are the same between the 2019 and 2020 versions. But there are additional Cher shows available in the 2020 S&C collection (confusingly enough).