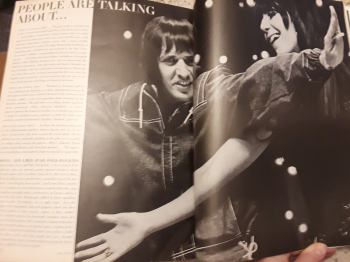 Just six months after their first hit in July of 1965, Sonny & Cher are already appearing in Vogue magazine in a column called "People are talking about…"

Who else were people talking about that issue? Sarah Badel, a stage and film actress, and Theodore C. Sorensen, a presidential adviser and speechwriter for John F. Kennedy. The section on Sonny & Cher is headed in bold. Cher's name is fully accented all through the blurb.

Look at them, Sonny and Chér. Everybody is. Love singers from California, they are married, positive-protest thinkers whose LPs and singles, I Got You Babe, Look At Us, But You’re Mine,  sell in the millions, have pitched them around the top of the disc charts. “I can only play seven chords,” says Sonny Bono, twenty-four [!], who plinks out most of the hymns to marital bliss they sing on marathon one-night stands, on television, in Europe, and in a movie they will make. Disarmingly baffled by their spiraling success, he said, “Everything’s out of sight, man.” Now the darlings of the transatlantic folk-rock kingdom, these two have countless hoarders of their records [how much could you hoar back then?], copiers of their clothes, Sonny’s lionhart haircut, his knee-length buckskin boots, his possum and bobcat jackets. Chér’s waterfall of dense black hair, her pale deep-eyed radiance, her hundred pairs of below-navel belled pants. (Nineteen-year-old Chér doesn’t own a dress). In the folk-rock idiom, Sonny & Chér pound out Love. Around Sonny’s hammering twang to let-us-be-what-we-wanna-be lyrics, Chér’s pours a plaintive low loop of sound.”

Interesting to note these two are "positive" protest thinkers, not pesky negative ones. Sonny was already 30 in 1965. With all the hippie-suspicions of older people, I guess you can see why he would lie about his age. I guess nobody did fact-checking in those days. As because this is Vogue, much is made over their kooky clothes. And this must be what makes the cher-stare so powerful: "her deep-eyed radiance."

The picture is very telling too. Sonny stares straight at he camera, slightly ambitious looking. Cher is carefree, innocent and looking at Sonny.