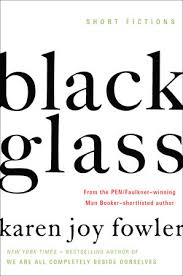 A good friend of mine sends me lots of good books for birthdays and Christmas, some of them collections of short fiction. I've accumulated so many I need to start reading them to clear off a book shelf. Not all of them are my cup of tea so I usually attempt to read each story at least. If the writing doesn't grab me right away, I move on to another story or book. I keep the ones I really like.

So it came time to read this one, Black Glass by Karen Joy Fowler and Cher was a prominent feature in the first three pages of the title story. Here are some screenshots. It's too much to retype.

The story opens in a bar. The Cher part on page one reads:

"Rows of cut-glass decanters filled the shelves. Schilling ran his towel over their glass stoppers. In the corner, on the big screen, Cher danced and sang a song for the U.S. Navy. Schilling had the sound off." 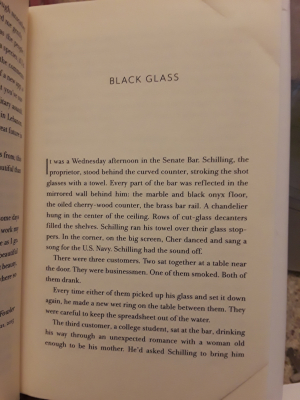 The reference on page two:

A drunk man comes in requesting booze. "'I don't have any money,' said the man. Cher closed her eyes and opened her mouth." The reference on page three:

People are drinking, minding their own business: "A second shaft of sunlight appeared in the room, collided with the mirrored wall. Inside the sunlight, barely visible, Cher danced."

Then "a nightmare in the shape on an enormous post menopausal woman" comes in holding a hatchet and a rock and she "hit the big screen dead center with the rock. The screen cracked and smoked, make spitting noises, blackened."

End of Cher in the story. 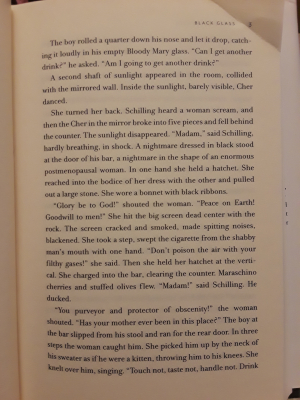 This was actually nothing against Cher, this woman smashing the monitor. She was a Fire-and-Brimstone messenger come to scare the patrons over the evils of alcohol. After all the violence in the bar which runs for a few pages, we switch to a scene with a DEA agent and I lost interest here. I ended up not finishing any of the stories in the book.

Sometimes when you have too many books, you gotta make some tough choices.