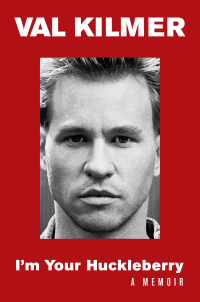 It's a typically shocking statement (taken out of context as it turns out) that the press loves to print about Kilmer who is a Christian Scientist. The interview also took place someone unusually because Kilmer has lost his voice due to his recent throat cancer.

Anyway, turns out Kilmer has a new memoir that came out this April 21. The cover is oddly self-published looking  but it’s a Simon & Schuster book. And there's lots of Cher in it (I bought a kindle copy so I could peruse these sections first), which is a good thing because that love affair between Cher and Kilmer remains somewhat mysterious in all Cher lore. When did it start? When did it end? Kilmer's never talked much about it that I've read. Neither has Cher. But he has extremely nice things to say about her in this book, especially her assistance recently during the throat cancer where he lived in her guest house after selling his house in Pecos, New Mexico.

Myself, I've always been torn about Val Kilmer. I do like that he’s a Lit nerd who totes around books like Ulysees (whether or not Cher thinks that's pretentious) and he also did a one-man show about Mark Twain. But I can’t identify with much about Christian Science (or any religion created by a 20th century novelist) and stories from the set always focused on how difficult he was to work with. So I expected a similar ego in this book and I have to say, I didn't hate the Kilmer in this book. He doesn't come across as the completely off-the-rails media creation.

The book also talks a lot about New Mexico. And I once lived very close to Pecos, NM, where his house was. Mr. Cher Scholar also worked with people who lived in Pecos. So this is the local Val Kilmer story.

Some background: Actress Greer Garson once married a cattle rancher and moved to Pecos, New Mexico. When she died she gave half of the property to her son and half (with the Pecos Indian pueblo ruins) to be designated as a federal historic site (great place to visit; Garson even did the audio in the park movie). Greer Garson's son then divided his land and sold part of it to Jane Fonda. She came to town and threw a party for the locals and they loved her for it. Val Kilmer bought the other piece and, as the story was told to Mr. Cher Scholar from some Pecos residents, Kilmer refused to give a local kid an autograph (forget about offering a party) and the locals hated him after that. Who knows if this is true but I can attest to the fact that there was graffiti scrawled on a Pecos overpass along I-25 for years that said Val Kilmer Go Home.

I did find this story online about locals being unhappy about his references to local problems in New Mexico and an article about the sale of the house, which he says in his memoir he was forced to do because of the financial crisis of 2008. He also claims to have invented the saying, "land of entrapment" in satire of the 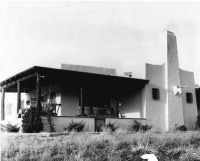 state's motto "land of enchantment." I don't know if that's true. It would be an interesting etymological study. In any case, Kilmer doesn't seem to harbor any ill will towards Pecos or New Mexico after all of that.

So the moral of the story is: visit Pecos, New Mexico, (you can even tour Garson's house designed by John Gaw Meem) and enjoy Kilmer's memories of good times with Cher.

Val and Cher: Then and Now 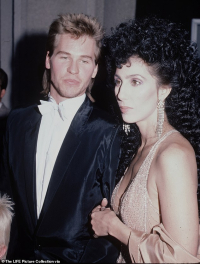 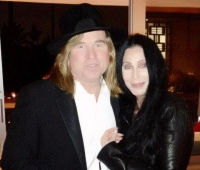