From the Chersonian Archive: Joni Mitchell Lyrics
A Great List of Sonny's Achievements

Someone posted a paragraph on Facebook in 2016 about Mark Patton and an upcoming novella he was outlining about his experiences working on the Broadway play and movie Come Back to the 5 and Dime Jimmy Dean, Jimmy Dean. He talks about Cher’s perspective being mostly about Cher-centric about Kathy Bates being dismissive of the experience. Patton was 22 at time time, he says, and Cher was 37. They were besties for a while during production. I went online this week to find out if the book came to fruition and found this cool documentary about Patton from just last year.

The movie is primarily about Patton's experiences working on the Nightmare on Elm Street franchise and the issues it raised in his life. But he also talks about his time working with Cher.

"In Scream, Queen!, Patton recounts his Broadway debut in Come Back to the Five & Dime, Jimmy Dean, Jimmy Dean, which was directed by Robert Altman and co-starred Karen Black, Kathy Bates, and Cher. (Yes. THE Cher!) With such big names onstage and off, celebs frequented the playhouse often. And on one special occasion, David Bowie came by and kissed Patton. It's a story he mentions in the movie, but we FANGRRLS needed the full scoop.

"How that happened, actually," Patton began with a smile. "We were rehearsing. There was only one electrical outlet, right? And it was in Bob [Altman]'s office. So I had to do my James Dean hair and I needed a blow dryer. So I was just sitting there all self-involved." At this point, he mimed doing his hair into a Dean-worthy pompadour. "And Bob said, 'Oh Mark, this is my friend David. David, this is Mark.' I'm like, 'Hey, how are you doing?' Still blow-drying my hair."

In telling the story, Patton re-enacted. At this point, he paused in his pantomime of blow-drying to glance over her right shoulder. Then he said, "That's f***ing David Bowie." After this brief introduction, Bowie went out to the house to watch the show. "Many people did this, [and] then would give us notes and everything," Patton explained. "But as [Bowie] was running down the stairs, he grabbed me, kissed me and said, 'Oh, you're fabulous.' And then went off to see Cher."

Speaking of Cher, Patton had another story to share. "I had one experience," Patton began. "Me, Cher, [hockey player] Ron Duguay, [Studio 54 co-owner] Steve Rubell, and [American fashion designer] Halston, who everybody called 'Pussy,' we were in a limousine going to Liza Minnelli's house, where nobody wanted to go. They were like, 'Oh, that b*tch does nothing but talk about herself all the time.' And so we get to her house, and it's a black-and-white fantasy. It's all Liza everything and Oscars. And by the end of the night, she's dancing up a storm to 'New York, New York.' And I'm fascinated. 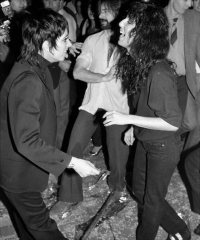 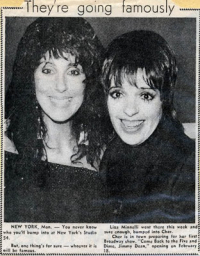 "Scream, Queen! reveals much about Patton’s personal life, including his own HIV+ status, his longtime self-imposed exile in Puerto Vallarta, and his enduring friendship with singer/actress/goddess Cher.

Speaking of gay icons, here a question some of our readers will consider the most important: Do you still speak with Cher?

I do. (Laughs) I used to live near Chaz (Bono, Cher’s son) in West Hollywood. Cher lives in a particular world, surrounded by people at her level of success, but she’s always been kind to me. We met when we did the play Come Back to the Five and Dime, Jimmy Dean, Jimmy Dean on Broadway in 1982. We were very close and are still friends and we would go out to Studio 54 after the show. At the time, she always had a dark-haired young man she would be interested in and a blonde young man at her side, so I was her blonde “wing man” at the time. (Laughs) She remains very supportive and I really hope she comes to see the film at some point.

More info about the film in HIVPlus Mag.

Here's the movie website and trailer.  It supposedly came out in March 3 on Amazon. I will be watching for this.