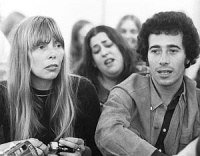 Apologies to the Cher scholar who brought these lyrics to my attention. I printed them out to look at later and then years and years went by and I recently dug them out of the Chersonian Institute's messy archive.

There's speculation that references to Cher can be found in the lyrics of two Joni Mitchell songs. Here's what we do know: Joni Mitchell, Cher and David Geffen lived in the same house for a time while Cher was dating Geffen in 1973-74. Mitchell and Geffen are quoted mentioning this situation. When Cher left Geffen for Gregg Allman, Geffen admits he was distraught to distraction and had to seek therapy. He also states Cher was his only girlfriend. So the pool of possibilities here is very small (like Cher) if in fact Mitchell is referring to David Geffen in these two songs.

From her song "Love or Money" from the 1974 concert album Miles of Ailses.

Vaguely she floats and lacelike
Blown in like a curtain on the night wind
She's nebulous and naked
He wonders where she's been
He grabs at the air because there's nothing there
Her evasiveness stings him
With long legs-long lonely legs
Bruised from banging into things
One day he was standing just outside her door
He was carrying an armload of bright balloons
She just laughed
She said she heard him knocking
And she teased him for the moon...

This song was recorded in March and August of 1974, in the turmoil of Geffen and Cher's relationship.

There are no overt references to David Geffen in the song but these are the possible Cher-related lyrics:

who left her long black hair
in our bathtub drain?

This is a much later song, the album was recorded in 1977 and could be referring to another Mitchell relationship and another mysterious girl.