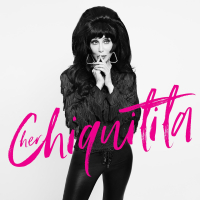 Oy. What a week I had last week. The bedrock of my extended family, Aunt Mildred, passed away suddenly on May 1. I currently have her name on three to-do lists for various reasons (which is killing me right now). This happening during Covid-19 was particularly harsh for the family and her friends as there are quite a large amount of mourners. Twenty-five of us did go to the gravesite near a small town in northeastern New Mexico last Saturday. And incredibly, the funeral was Zoomed to the rest of the family.

The release of the new Cher single for UNICEF was a breath of fresh air in a dreary and painful week. I played it on the drive up to the funeral.

Cher released the ABBA cover of "Chiquitita" in Spanish on Friday, May 8. The video was released Saturday May 9 during a UNICEF special. Everything is available to purchase online to benefit UNICEF, the foundation Audrey Hepburn worked with for so long toward the end of her life.

There's also a new Cher interview in Billboard. In the conversation we find out one of the single "Believe’s" early champions, Warner Bros executive Orlando Puerta, has died of Covid-19.

There's also a nice mention in the New York Post.

Chiquitita, no need to cry
I want to see you smile
Share your happiness
Ay, Chiquitita

Cher has been working on Covid-19 relief with her CherCares charity coordinating with Dr. Irwin Redlener. She has also donated to a fund for MGM Grand Resorts employees.

You can buy the English and Spanish together in a package. Review your purchase options. My sincere condolences to you Mary and to your family. May she rest in peace. Bruce