The Politics of Pop Music 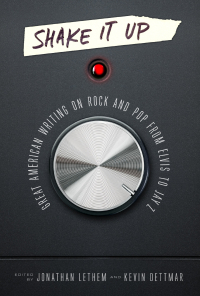 Over the years I’ve been refining my ability to defend my taste in Cher’s music, not just her meaning as a media cultural object. Both things, but mostly her music because this is what is attacked the most from...well, mainly boys and the rare girl music aficionado. And as I’ve been taking incoming criticism for her music by my other brothers since I was about 5 or 6 years old, I’ve had a lot of practice doing this. And although I’ve appraised my biases with books like How Pleasure Works by Paul Bloom (which I highly recommend) and just the instinctual understanding that all taste is relative, I’ve always worried that defending one’s taste can be too much of an ongoing rationalization.

In other words, I’m just rationalizing arguments to defend what I like and there’s an argument to be found for the worst taste in mankind. For example, one day at lunch when I was defending Agatha Christie's craft innovations to my boss (I've just turned 50 and am insatiably attracted to British mysteries as expected), my boss scoffed, "You can come up with an argument to defend anything." Fair enough.

But I still have this ongoing desire to keep looking for something to explain it, especially when a feeling of defiance is aroused in me that this music is meaningful and a protest and a celebration of something, that it's doing some cultural work. But then that feels like a rationalization again. Until a straight, white male goes all anti-disco on me and then I go back to the search.

But that’s important. The straight male thing. And I don’t want to gloss over that. It turns out this was very important. I always thought that was incidental to the enjoyment of this music, the fact that I'm a woman and enjoy it along with a whole horde of gay men (and some gay women). It’s completely not incidental. Turns out it’s the whole thing.

Oh man. Sometimes you don’t know what you’re looking for until you come across it.

Years ago I started reading academic pop culture books, stuff about the male gaze, drag and camp. If only there had been such a pop culture degree when I was starting college in the late 1980s. Recently I was doing an Amazon search and this book came up, Shake It Up: Great American Writing on Rock and Pop from Elvis to Jay Z and I kept it on my wish list for a few years. I assumed it would be very rock-centric, which isn’t bad but not as pertinent to my search as those books on camp and MTV videos. But eventually I bought it and loved every minute of reading it.  it opened my horizons to aspects of music writing that I wasn’t getting from the other cultural books.

Not only that, but there was some amazing essays in there by women, essays about rock music from a female point of view. I didn’t even know I was looking for that. But I loved it so much so that I made a list of the writers and have been hunting down their books. The first one I found was the anthology Rock She Wrote. In many ways it wasn’t as satisfying as the Shake It Up anthology but there were a few essays in the back that more than paid for themselves.

The poet Emily Dickinson talks about reading poems that take the top of her head off.  This idea has become such a cliché in poet circles that a poet with go “yeah, yeah, whatever” if you so much as mention a poem “taking the top of your head off.” It's like when you were in the late 1960s telling someone that thing “blew your mind.”

All the same, this essay took the top of my head off. And if you ever need an essay to defend yourself as a Cher fan: this…is…the one. 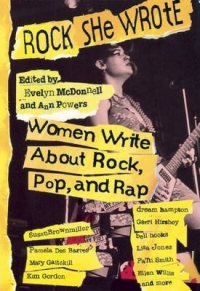 It’s by a music academic named Susan McClary. She doesn’t write about modern music very often, but this essay is called “Same As It Ever Was: Youth Culture and Music” and it appeared in the journal Microphone Fiends in 1994. You can’t find it online but you can find it in Rock She Wrote, edited by Evelyn McDonnell and Ann Powers. The essay talks about “youth culture” as it has occurred throughout Western civilization and how this music always threatened the status quo because it was an explicit threat to their authority.

You may not be a young person, but liking pop music is a threat to some kind of authority.

And here's the interesting thing: most historical reactions have construed "the new thing" as being “too feminine” and too much of the body. McClary traces these critiques going back to Plato through the Middle Ages up to Theodor Adorno and beyond.

“Yet those who purport to speak for popular culture have often reproduced this fear of the feminine, the body, and the sensual. Recall, for instance, the erasure of women—whether the blues queens of the 1920s or girl groups of the early sixties—from historical narratives, or the continuing devaluation of dance music as a pathetic successor to the politically potent music of the sixties—especially in the “DISCO SUCKS” campaign where an underlying homophobia is quite obvious, but also in the blanket dismissals of the many African-American genres (including disco) that are designed to maximize physical engagement.”

And she traces this back past early responses to jazz to the Middle Ages innovation of polyphony.

She also questions where a real political charge happens, in a lyric text (think 1960s folk songs) or in the music itself. She states [my bold]:

“From my perspective as a music historian, it seems to me that the music itself—especially as it intersects with the body and destabilizes accepted norms of subjectivity, gender and sexuality—is precisely where the politics of music often reside….The important question is: What qualifies as political? If the term is limited to party politics, then music plays little role except to serve as cheerleader; if it involves specifically economic struggle, then the vehicle of music is available to amplify protest and to consolidate community. But the musical power of the disenfranchised—whether youth, the underclass, ethnic minorities, women, or gay people—most often resides in their ability to articulate different ways of construing the body [see where fashion innovation happens], ways that bring along in their wake the potential for different experiential worlds. And the anxious reactions that so often greet new musics from such groups indicate that something crucially political is at issue.”

…”This is not at all to suggest that artists or fans control the scenario—the ability of the industry to absorb and blunt the political edge of anything it touches must not be underestimated…[but] by virtue of the market and its greed-motivated attention to emergent tastes that music has broken out of the officially prescribed restrictions and has participated as an active force in changing social formations—formations that Plato and his followers saw as the very core of the political.”

“’It’s got a good beat. You can dance to it.' Critics often dismiss such statements as evidence of the mindlessness, the lamentable absence of discrimination in pop music reception.”…

“Recall Plato’s warning: ‘For the modes of music are never disturbed without unsettling of the most fundamental political and social conventions.’”

“…the fact that a tune is construed to maximize its ability to make money…does not mean that its social effects are negligible. Without question we need to attend closely to how those who profit manipulate our reactions. But students of popular culture who hasten to trash all commercial music betray how little they know about Western music history.”

Yes! Wow. We have arrived at a clue here!

This essay led to so many thoughts about the effectiveness of political action through lyrics and politics through music and where we are today vis a vis 1969. What has changed. What hasn’t changed. I have been a firm defender of Bob Dylan as a poet fully deserving of the Nobel Prize in literature but you could sing a Bob Dylan song today and it would not sound historical. We have changed but since the 1980s have been regressing backwards. For all the lyrics we love, "Masters of War" still stands as a current argument. CCR’s "Fortunate Son" more than ever. "One Tin Soldier" one-hundred fold. "RESPECT." Beatles’ "Revolution." Must I invoke "The Eve of Destruction" amidst coronavirus and Trump?

But then we have gay marriage and Barak Obama was president for eight years. This is not to say one genre of music is better than the other.

Just don’t dismiss the “other.”