The Politics of Pop Music
Television Share Through Time

Stuck at Home with Somebody Variations 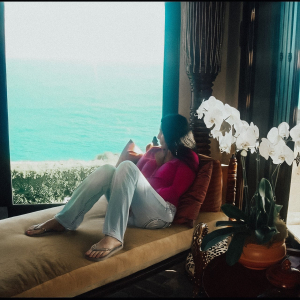 Stuff to Hold Us Over

Cher tweeted the picture (right) of herself staying at home. Which is what most of us are doing right now, give or take an ocean view.

A small list of things cancelled on me recently:

It sucks to be human right now but you have to keep reminding yourself, it could be much worse. Crazy enemies could be bombing your house. That would be a lot worse, especially because you'd lose your internet connection.

Anyway, this month was to be my first visit to see a Cher show this tour but, as we all know, everyone's everything was cancelled this season or postponed and all our plans were given wedgies.

Maybe this will give me time to catch up on tour reviews.

In the meantime, hopefully you aren't going crazy by forced inactivity. Like toilet paper and frozen pizzas, here are some things to hold you over: 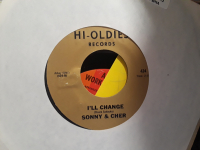 A few year's ago Cher scholar Dishy sent me a song on a 45 record. I didn't have a record player at the time. I dug it out last weekend and played it, Sonny singing "I'll Change."  Cher scholar Robrt informed me recently this was originally a Don Christy (Sonny's pseudonym) track on Rush Records in 1961. It was released a few times after Sonny became well known, including this misleading 45 label indicating Cher had anything to do with it. 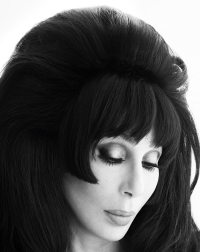 The lovely CR Fashion Book cover is out. Read the interview, see the pics here.

Along with the 45 above, I dug out all copies of my favorite Cher song, "Somebody." Here's a breakdown of the versions: 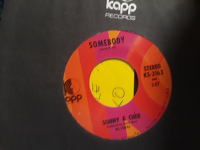 And finally, for years I've been trying to locate a picture of Sonny & Cher's wedding rings together. I know I had seen that somewhere. I was looking through the opening credits of the movie Good Times when I found it. Now I've totally forgotten why I was looking for this but...here it is. I'll remember someday and by that time completely forget that I left it here. 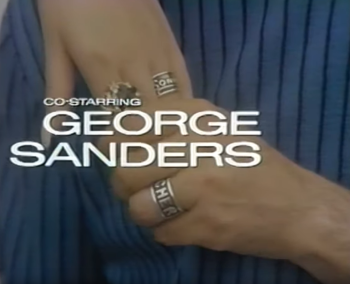