In the beginning, Sonny & Cher were managed by Brian Stone and Charlie Greene (pictured at left and below with Sonny & Cher), who also managed Buffalo Springfield.

This is what Stephen Stills has to say about Stone and Greene in an interview:

"We had Charles Green and Brian Stone, who basically were hustlers. They kind of got people in the studio and let them do their thing and if it happened to be a hit, they'd take all the a credit even though it was really Sonny Bono. [Green and Stone also managed Sonny & Cher.] They just stood around and made phone calls. It led to such things as Tom Petty cutting the telephone wire in that great documentary. I felt like doing that so many times."

So think about that when you re-read the Rolling Stone article about Sonny & Cher in 1973, a much more mean-spirited and overwrought piece than I remembered it being. But anyway, in the piece Charlie Green is interviewed and he makes MANY accusations about Sonny ripping off other songs from the era. You can listen track by track below to weigh in.

I read this eBook about folk-rock two years ago called Jingle Jangle Morning: Folk Rock in the 1960s. It's a tome of material about a very small subject. But Richie Unterberger, the author, is very disparaging about the part Sonny & Cher played in the genre. He depicts them as posers and calls the Byrds version of "All I Really Want to Do" “immensely superior” to Cher's version but the Byrds lost to Sonny's games of promotion. Remember The Boston Globe only in 2019 called Cher’s version better, "The Byrds come off as detached storytellers, Cher’s version has true heart."

Anyway, Unterberger points to Sonny’s age (30), their subsequent glamour-TV show, Cher’s movie career and Sonny’s Republican political career as reasons why “it can be difficult to comprehend or acknowledge that Sonny & Cher, for just a few brief months in the summer of 1965, we considered folk-rockers.”

In the meantime, while digging around my Cher stuff, I found a printout of a page from the website of Playboy immediately after the death of Sonny Bono in 1998. It catalogs everything anyone said about Sonny in the pages of Playboy, including excerpts by Steve Martin, Bob Dylan, Cher and James Carville (Sonny attended his wedding to Mary Matalin). 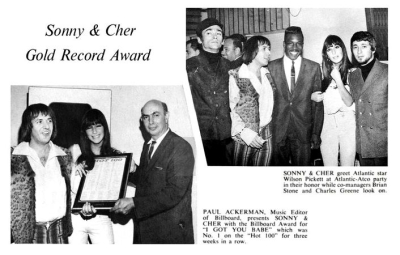 And interestingly enough Bob Dylan (King of folk-rock himself) comments about pioneering the genre and who the scene included in a Playboy interview in March 1978:

“Those were exciting times. We were doing it before anybody knew we would—or could. We didn’t know what it was going to turn out to be. Nobody thought of it as folk rock at the time. There were some people involved in it, like the Byrds, and remember Sonny and Cher and the Turtles and the early Rascals. It began coming out on the radio…and it was exciting, those days were exciting. It was the sound of the streets. It still is.”

I'm also reading Lillian Roxon’s Encyclopedia of Rock, 1971 edition, which is surprisingly full of Sonny & Cher mentions about their legacy in folk rock (as seen from the year 1971):

"Los Angles Sound: It started as Sunshine Dylan—that is, New York protest folk married to California sunshine rock—the Byrds and the Turtles rocking Dylan and getting the sound and themselves into the charts and the national eye. That was 1965, after the Beatles but before San Francisco and acid rock. It was the first faint indication that American was not about to take the English invasion completely lying down. Sonny and Cher were the Los Angeles sound with "I Got You Babe" and other early folk rock…The Byrds, Love, The Beach Boys, Jan and Dean…later came the California sound of the Mamas and the Papas.”

"LOVIN’ SPOONFUL: “And in California there was a burgeoning folk-rock scene with the Byrds and Sonny and Cher."

So here are the alleged rip-offs according to Charlie Greene. Give them a listen and post your comments.

2. Just You vs. Baby It's You by The Shirelles.

3. Bang Bang vs. Zorba the Greek

4. The Beat Goes On vs. Donovan's The Trip

5. Baby Don't Go vs. We'll Sing in the Sunshine

6. But You're Mine vs. You've Got Your Troubles I've Got Mine