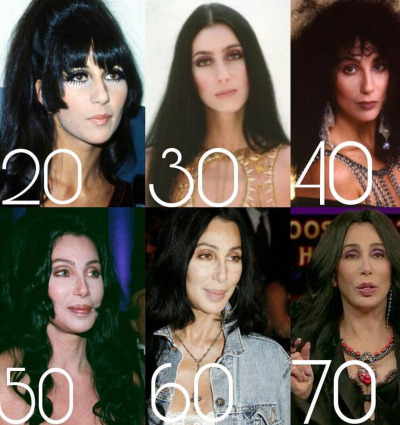 I went out looking for collages of Cher through time and turns out there are a ton of them! This was the best.

Anyway, I have a bunch of random thoughts today and couldn't figure out what umbrella to put them under. This is all about Cher in show-biz.

My friend Christopher sent me this older article from 2017 from the Wall Street Journal. It's about an identity crisis with today's female pop stars. The article contains interesting statistics about what’s selling on streaming these days (R&B and hip-hop) and what’s not selling as well (rock, pop and even country is declining).

The article gets under my skin a bit when it talks about “the pop playbook” being unpredictable (you think?) and when it mentions that women are criticized for hosting hip-hop artists on their albums but male artists are not. (And the difference would be?)

And it confounds me that in the post-Cher and Tina Turner era music execs are still saying things like Lady Gaga, Katy Perry and Miley Cyrus “may simply be past their hit making primes.” My friend Christopher tells me that female artists still disappear at the ticking time bomb of middle age! Oy.

The 1% of Touring Acts

Here is another older Wall Street Journal article from Christopher about how large arena acts are eating up all the concert $$$. And due to the fact that streaming is making record-making less lucrative, smaller acts depend on concert revenue.

It feels so much like large corporations swallowing up their competition.

In any case, to consider Cher in this 1% list is downright bizarre. If you would have told me back in 1980 that Cher would be one of the 1% of popular touring acts in the late 2010s, I would have thought you were a crazy person. This is the artist who has been on a zillion record labels with a disproportionate amount of bomb albums and a bad reputation with just about everybody from hipsters to squares. Which is why it drives me nuts when people accuse Cher of being a mainstream artist. Where is this mysterious stream?

And yet, the people do come out to her shows in those ginormous, block-sized buildings.

Although Cher is not listed as one of the highest grossing acts of the 2010s, she is named as #11 for highest grossing in 2019, ahead of Mumford & Sons, Michael Bublé, Paul McCartney, Garth Brooks and Ariana Grande. And I'm sure all of those acts are more popular than Cher is.

But why am I complaining. This is great. Finally, right? I’m actually very conflicted about it. Popularity: good. Monopoly: Bad. 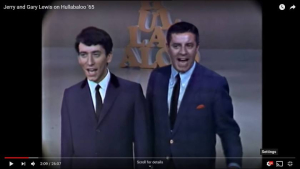 I recently came across a clip of Gary Lewis (of Gary Lewis and the Playboys) and his father Jerry Lewis singling together on the show Hullabaloo. That prompted me to look up what kind of relationship they had. As it turns out, Gary and all his siblings from Jerry Lewis' first wife were all disinherited (as a group!) and Gary has called Jerry Lewis "a mean and evil man." I don't know how Cher really felt about Jerry Lewis but I've read he was always nice to Cher on her variety shows and she seemed to like him. She's never came out with any trash talk about him in any case. Mr. Cher Scholar, like a large population of the country France, considers Jerry Lewis a comedy genius.

Likewise, Cher had no rough encounters with the homicidal Phil Spector, holding her own against his in-studio verbal taunts. Many consider Spector a producing genius of the early 1960s.

And that reminded me that Sonny’s running mate for the Palms Springs Mayoral race once called him a “mean little Italian.” Others have mentioned difficulty working with Sonny too, but Cher enjoyed working with Sonny. She even seemed to forgive him for his egregious business scams involving Cher Enterprises. Her beef with him concerned mostly personal marital and control issues. And on a recent Good Times movie DVD, the director William Friedkin called Sonny an unqualified genius. And although this is maybe not a popular view of Sonny, I would argue he was probably a promotional genius of the scrappy kind. A lot of his ideas about career longevity and independent/guerrilla promotion were before their time by at least 30 years.

And all these things taken together, you might wonder if Cher has a high tolerance for dysfunctional male geniuses. 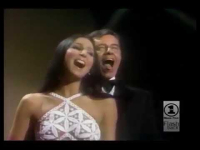