Cher on Sirius
New Perfume Just in Time for Christmas 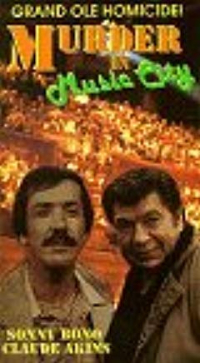 So I finally had a chance to watch Sonny's 1979 movie, Murder in Music City, sometimes known as The Country Western Murders (I don't know where or why two titles were used or needed). And I never realized before now that this was an NBC TV movie. It aired on January 16, 1979.

Is it me or does his head look Photoshopped (or whatever they called it back in 1979) oddly to his body in that ad below.

It opens with Sonny running from some bad guys. He plays a songwriter named Sonny Hunt (you hear two lines of a song) with a very spunky, likable girlfriend, a supermodel allegedly. They get caught up in a murder mystery because Sonny is so successful as a songwriter that he needs to put his money somewhere and his manager suggests a failing detective agency.

These two kids actually have chemistry and this would have been a better series, like a Hart to Hart. It's not as bad as you might think. Sonny does a pretty good job. He just doesn't have that elusive 'it' as an actor but this performance is far from embarrassing. The script was pretty much what you'd expect a TV movie in the 1970s to be. And considering this is Sonny's only starring movie role, it's worth a watch. 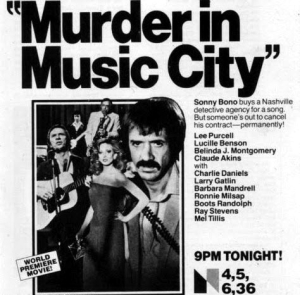 He's shirtless multiple times. I should come up with a Sonny-shirtless-in-movies scale chart because he seems to be shirtless quite often in movies.

And remarkably (since this is a movie about Nashville after all), there are lots of country cameos including Mel Tillis (singing AND stuttering…I love me some Mel Tillis!), Barbara Mandrell (adorable per yush), Ray Stevens singing with Ronnie Milsap, Larry Gatlin, and an unrecognizable Charlie Daniels. Plus you get Morgan Fairchild, Claude Akins, Lee Purcell and that adorable character-actress Lucille Benson as the kooky secretary.

Even more remarkably, this flick was directed by Leo Penn, father of Sean, Chris and Michael.

The interactions between the country singers and Sonny are interesting and unusual. You had to wonder what everyone was thinking. Sonny was a fading hot commodity post breakup with Cher and their TV shows. You got the idea that Cher was more of a country music fan than Sonny (who was all R &B and Soul) and Barbara Mandrell was flying high on her hits "Sleeping Single on a Double Bed" and "If Loving You is Wrong (I Don't Want to Be Right)" and on the cusp of her own variety show. There's a hilarious interchange between Sonny and Barbara where his character doesn't know who Mandrell is. Okay, Sonny Hunt.

The Thrilling Detective website had this to say about the movie:

“Full of logical inconsistencies (Sonny has to break into his own business), wisecracks that don’t so much crack as slither, and a slew of country music celebrity cameos that pretty much define “gratuitous.”

This is the 1970s. Gratuitous has no meaning here. And it was very funny when Sonny broke into his own business. Therefore a fan of Rifftrax, I submitted this movie for their astute consideration.