The Universal Fire and a New Believe Cover 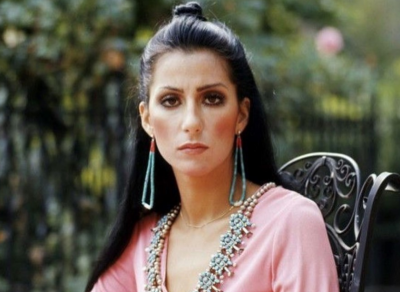 Earlier this year the Universal Fire story broke and details about the huge losses by the Universal Music Group when a warehouse of master tapes in Los Angeles caught fire and were destroyed. And then they covered it up.

This story brings up whole new slate of debates about the value of digitalization and problems with authorship, corporate consolidation, corporate bullying and the tragic danger of having too much intellectual property in one physical location.

It's a cultural loss on a huge scale with original masters lost from artist such as Billie Holliday, Johnny Coltraine and Martin Luther King, but also on a very small specific scale for individual artists and their fans.

Anyway, Cher's name was mentioned a lot. Many, by no means all, of her many labels were long ago consumed into Universal Music Group, only to be consumed once again.

I was making the case to my music-biz-scholar friend Christopher that curation of large cultural holdings, even if you're a private entity, should come with extra responsibilities such as a museum, (even a private one) would be pressured to adhere to.

I remember one phone call about 10 years ago where he rattled off all the major music label conglomerations off the top of his head! I asked him to reiterate the tangle for me again here and forensically trace the behemoth that has become United Music Group and which labels it has swallowed up. This would be another way to figure out which Cher albums might have been affected.

But sadly, we are beyond such quaint displays of memory. Instead, he simply just sent me this link. It's a graphic of all the consolidations and it's so goddamn big, it's unprintable!

It truly is shocking.  Not the fire, per se, but their slimy way of keeping the news from the artists for over a decade!   Although, I should probably say it is shocking...but not surprising.  I harbor such distrust of corporations; their ranks seems always to be filled with individuals who pass the buck to someone else when accountability enters the picture.  The larger the corporation, the less likely anyone is willing to take responsibility when something goes awry.
Here is a great graphic that New York Magazine put out a couple years back which gives an excellent summary of the conglomeration of the music labels over the years.
Personally, I think of all the major labels, UMG is the most higgledy-piggledy in terms of its roster; both Sony and Warner's various absorptions involved more organic matches/compatibility.  All the feverish flipping that occurred in 1995-1999 between Seagram/MCA/Vivendi/Universal may have created the largest conglomerate, but I believe it also created the most inherently unstable one.  So in some ways it makes sense that if there was going to be a disaster of this sort it should occur amid their holdings.  If the ass doesn't know the elbow, the lack of proper archiving (that is, record-keeping--aside from the lack of the materials' physical safety) would appear to necessarily follow, and who knows, maybe the same could be said for their basic physical operations.

But the graphic does mostly explain where all the holdings of Cher are and she is spread out pretty wide across all the three behemoths:

- At Sony Music Entertainment are holdings for Columbia (everybody breathe: the I Paralyze album is safe!)

- At Warner Music Group are holdings for ATCO, Reprise, Rhino (Cher’s 60s output), plus her already lost albums from Warner Bros (was there a mini fire somewhere?), not including the later-day Warner Bros. UK albums.

- At Universal Music Group were holdings for MCA/Kapp, Casablanca (very early 70s Cher and Sonny & Cher and very late-70s Cher), and, although I can't even find it on this stupid chart, Geffen Records (Cher's 80s label). This is not great news. Some iconic stuff in there. 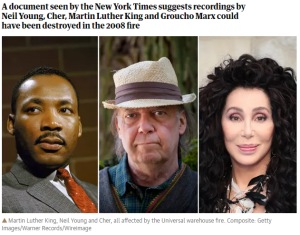 Still, some of the news stories mentioning Cher were somewhat humorous, like this one with the angry Cher face as the lead photo.

Or this article with this hilarious photo by juxtaposition: implying the biggest cultural losses were Neil Young, Martin Luther King and Cher.

Hey, I'm the first to defend Cher's cultural impact, but...

BHuman has made a pretty decent "Believe" cover, keeping it techno-friendly but slowing it down.

And a new Cher ABBA album is in the works. No full set list yet but she's been talking about individual songs on her Twitter feed. My vote was for "When All Is Said and Done." Fingers crossed it makes it.