The Universal Fire and a New Believe Cover
Cher on Sirius 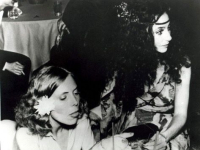 Thanks to all the Cher scholars out there who sussed these articles out, including super-scholars Michael, Tyler and Dishy. What an amazing year of Cher scholarship it's been. Lots of younger writers extolling the virtues of Cher!

The Guardian: It’s not always easy to be a Joni Mitchell Fan

Although not about Cher per se, Linda Grant has been a Joni Mitchell fan for over 50 years (I’m 5 years away from that and I'm sure some of you are more) and she's thinking about the death of her subject, how Mitchell doesn’t get the credit she deserves (Dylanesque credit, specifically).

She claims Mitchell has written her emotional biography. I don't feel that so much as the fact that Cher has been a soundtrack to the physical biography, and definitely an aesthetic biography.

But what I like about this article is mostly this well-written line:

“Perhaps the lifelong experience of being a fan, an admirer, an acolyte or a student of an artist will turn out to have been a fluke, a small window of privilege, and from now on careers will burn up in a year or two, the experience fleeting for the adorer and the adored alike. I don’t think she knows how much she’s venerated. Or maybe she knows and it doesn’t matter. It fulfils nothing. It makes no difference. She’s as alone with her music as we are.”

Thankfully Cher in her old age has not become bitter, her tone “autocratic, arrogant and angry.” I worry maybe Mitchell is bitter because she’s a music treasure not venerated as much as she should be, as much as Cher is starting to be, although their apples and oranges.

Remember their moment together living under the same roof with David Geffen while Mitchell was recording her classic Court and Spark album and Cher was recording and self-conscious of, Dark Lady? Giant ships crossing in the night.

Cosmo, a magazine I love more now than when I started reading it in the 1980s, publishes a lot of strong women stuff these days, interspersed with the celebrity fluff, including this interesting article “Decoding Beyonce and Jay-Z’s Relationship, It’s Complicated.”

It reminds me of two things:

(1) Beyoncé does the accent thing and I never noticed that before. I wish Chér still did. 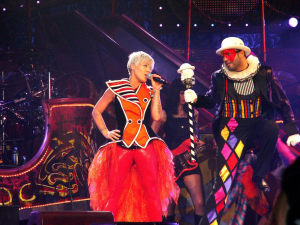 (2) I wish this sort of laser-focus existed back in late 1972 through 1974 with Sonny & Cher were "decoupling," this decoding of the body positions: interlaced fingers, embraces.

I recently watched a video of Pinks Funhouse Tour of 2009 and it’s got Cher’s Farewell Tour written all over it...although you might argue she does it even better. But it begs the question, remembering of those horrid reviews Cher got for “circus-i-fying” her concerts, why is this the style de rigueur now with young pop women. 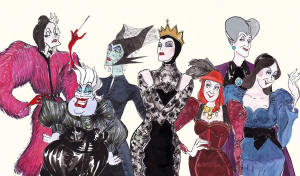 Cosmo also did a great essay this month by Shannon Carlin about the evil villains of Disney movies. Remember Cher’s lament that all the characters who looked like her in Disney movies were the evil women villains?

Carlin says “pretty princess types pitted against vengeful, aging antagonists. There’s no question who little girls are supposed to root for.” But aside from all the murderous plots and kidnappings,  “at least [they] take action instead of waiting around for someone [ahem, prince charming] to rescue [them].”

You could argue the raven-haired might have opted for that chance had they been offered it. Also, Cher was rescued by her prince and he did saver her from poverty (into the stratosphere)...but then what?

And that is the sublime part of the Cher story. Another important point: she never went villain.

Carlin goes on to say that “complicated women are far more captivating than one-note damsels in distress. They’re just legit more human--even when they’re half octopus.”

She then calls the Seven Dwarfs “groody men” which is entirely unfair. Happy and Bashful were real charmers.

My favorite Disney movies was The Rescuers (because it was scary) and this action-still for years has been my icon at work. I feel it represents all three aspects of my personality: a somewhat misguided and insane Medusa, a very content little bear and a completely confused little girl. 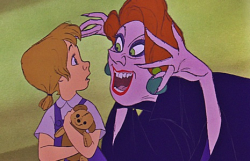 Rolling Stone did a piece about how "Cher Stands Alone" by Rob Sheffield. He calls her “the one-woman embodiment of the whole gaudy story of pop music.” And this is very funny: he depicts “the battle of Cher versus Time turned out to be a mismatch. It’s Time that has trouble turning back Cher.”

He says, “There are no careers remotely like hers….she’s been on her farewell tour so long, it’s old enough to vote.” He says she invented red carpets and infomercials. "People said she couldn’t sing, yet she always sounds like herself...She’s part of every pop story,"

Chris Dondoros wrote about "Six decades of Cher" and said, "Cher’s creative risks have foreshadowed music industry trends." He mentions her Wall of Sound records (not really risky but trendy) and auto-tune (continues to be controversial). 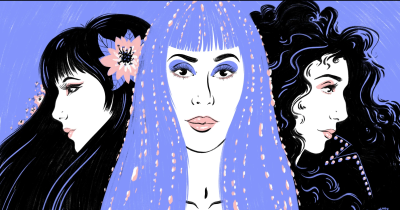 Nick Levine produced, "A Guide to Getting into Cher, Pop Shapeshifter" with original art by Tara Jacoby.

He notes her "majestic voice" and ability to "reinvent herself repeatedly over the decades without losing her quintessential Cher-ness." He notes correctly that Sonny & Cher were the "family-friendly faces of the hippie movement" and that they showed in the 1970s "flawless comic timing" and "firecracker duets" and back to her voice, "it’s easy to forget what a dazzlingly distinctive vocalist she actually is." (thank you)

There are even suggested playlists for all her eras: kitschy folk-pop Cher, middle-of-the-road pop Cher, disco diva Cher, soft-rock Cher, (which he says, "made a strange kind of sense at the time...her voice wasn’t overshadowed by the cheesy metal riffs of 1989, camped-up Bon Jovi" which "essentially, appealed to your Dad and queer uncle alike") and wig-wearing, vocoder-loving dance-pop Cher (which he calls "Cher of Light").

He calls "Turn Back Time" , a song that taught us that no key change is too shameless." (thank you again)

In Nashville Scene, Ashley Spurgeon writes about how Cher continues to be an icon.

"At the disgusting, decrepit age of 43, [Cher] had the audacity to look really sexy and imply she was going to bone a boatful of sailors in the ["Turn Back Time"] music video….Authenticity is the byword of the age, and for all creative arts, music is held to its absolute highest standard….but the problem with centering this definition...in the realm of musical creativity is that it completely forgets that entertainers exist.  The Authentic Entertainer is an explosion, usually of glitter. Artifice is the point. And Cher is as authentic an entertainer as has ever graced the stage." (THANK YOU)

Spurgeon even acknowledges Cher's “SoCal” plastic surgery and her AutoTune and only says: “The sheer audacity, to this day!” Indeed.

I think I'm hyperventilating I'm enjoying this so much.

"Basically, Cher has taken ever-more-insistent demands for authenticity and reflected them back in her own bedazzled, witty and wry image (not unlike her peer Dolly Parton). Making this contradiction work is how an icon stays an icon..." 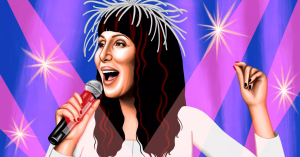 Lindsay Zoladz writes "Believe In Cher or Not" another kick-ass article with more original, unaccredited, artwork.

She calls Cher the ultimate millennial and explains why. She's "transgressed the laws of celebrity...in the past few years, though, she has ascended to an even more rarefied level of the celebrity stratosphere."

"Part of the reason I think Cher is so beloved right now—especially for people whose lived memory of Cher begins just 20 years ago, with “Believe”—is that even her past makes sense through a modern cultural lens. She was famous for being famous decades before anybody knew what a Kardashian was. She has fluidly toyed with gender norms and sexual mores until they’ve looked stiflingly passé, and she has always been brazen about her hustle. She is very good at using emoji. And above all things, she evinces an odd combination of over-the-top artifice and gritty authenticity. Of course she’s had work done. But, as she so characteristically put it in an interview montage that aired right before her Kennedy Center Honor, “If I wanna put my tits on my back, that’s nobody’s business but my own.”

"Cher has always presented androgyny as a source of power. It’s part of the reason she’s always had such a devoted queer following. She was also one of the earliest proponents of drag culture….Cher would time and again wield this kind of gender fluidity as a superpower."

Zoladz calls Laverne a proto-Kristen Wiig character and toward the end of the piece says this very funny thing:

"This time her sparing partner wasn’t sonny, Peter Bogdanovich, or a nonbelieving recorde executive, but mortality itself--and Cher seemed to have it in a headlock.”

And as that article referenced Cher’s ass does indeed have a Facebook page. 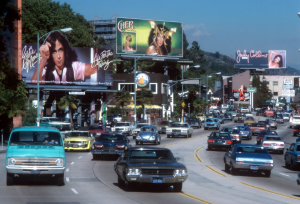 And this article came out recently about LA’s Greatest Billboards. And just look at the company she keeps here. And she's the only woman!

A fan recently posted Sonny Bono's visit to The Bob Costas Show. It's interesting to revisit this post The Cher Show revelations.

Sonny talks about how Sonny & Cher can cause a media frenzy together that they never can by themselves (even into the 1980s). "Ten times our impact when we're together," he says. He's talking about the frenzy they created on David Letterman's show. But there was also frenzies prior: when Cher attended the opening of his first restaurant, when they appeared on other show together. They did seem to be a sum bigger than their parts.

And that was probably true until the day he died. Then, as I’ve argued, you could see a shift in her personal impact, as if she inherited the Sonny & Cher brand fully and was creating the frenzy alone.

In one sentence, Sonny says Cher would have been a phenomenon without him (due to her drive) and then minutes later tells the media frenzy story. The truth is probably that Cher had superstar material organically but Sonny added something to make it really big.

He also talks about the pride he takes in "The Beat Goes On" and the legacy of hearing “the beat goes on” coined into phrase.