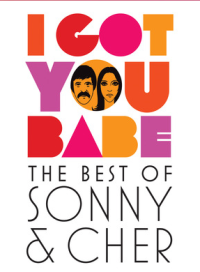 Time/Life has come out with a DVD set of The Sonny & Cher Comedy Hour, Cher and The Sonny & Cher Show. The site will lure you with an upgrade which is just a set of Laugh In shows they've probably been unable to sell.

That said, Cher’s performances in the one episode of her guest spots included is wonderful, unseen Cherness, so much better than her Indian skit with Tim Conway found online from that episode. That might be worth the upcharge for you. It was for me but...

See the trailer for the DVDs: https://www.youtube.com/watch?v=D5Mcper-JcE&feature=youtu.be&fbclid=IwAR1Ap63YwwpRGDOXo98cTednBtRa3r6nEbH5QMENLShrcrMs6A17pDZZJzE

The 58 Episode set (not more Sonny & Cher shows though): https://timelife.com/products/the-best-of-sonny-&-cher-and-laugh-in

It is good we’re seeing Cher episodes available now. But these are mostly episodes we've either seen on TV Land or GetTV, with the exception of one episode with Jim Neighbors.

I would think we should get DVDs of at least what was Emmy Nominated from the show, including the lost-lost Cloris Leachman episode that won an Emmy.

The booklet and packaging are great, great photos although not always in order  (especially for series 2) and claim Steve Martin would stop by with one-liners instead of come to work as part of the first show's staff. You get to see an early version of the Sonny & Cher bubble drawing. The interviews are also good.

I've also been making my way through reviews of the show and am down with Season 2: https://www.cherscholar.com/the-tv-variety-shows-and-specials.html

Mary,
Do you think this is worth buying or is it like the other 3-dvd set? A one time offer with no other
future dvds to purchase?
Thanks
jimmy

Sorry Jimmy. I just saw this. Maybe my notices were going into spam?? It's not the same episodes as the other DVD set, but it has a lot of the TV Land episodes, which you might already have taped off. It does have some great extras. I hope more episodes will be released but I'm not holding my breath. I was hoping, considering Time Life's typical breadth of product, this would be a complete set. It's not.