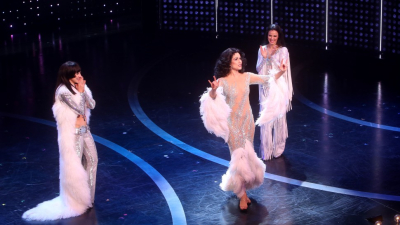 August 18, 2019, was the final performance of The Cher Show on Broadway. As you know, my friend Christopher and I thought the Broadway show was looking pretty healthy. The final returns can be found here: https://www.broadwayworld.com/grosses/THE-CHER-SHOW

Here's the graphic of the run...

I was indeed sad because I really wanted to see it again. My friend Coolia said not to worry; the show would hit the road. And it will in 2020. For more information on the touring version coming to your town: https://www.broadway.com/buzz/196276/the-beat-goes-on-the-cher-show-will-launch-a-national-tour-in-fall-2020/

The show continued to get positive vibes, like this one from Forbes: https://www.forbes.com/sites/jerylbrunner/2019/04/09/the-cher-show-celebrates-the-ultimate-empowered-woman-cher

The author quotes Gloria Steinem and her book Outrageous Acts and Everyday Rebellions to talk about "the incredible strength of non-conforming women:"

“I have met brave women who are exploring the outer edge of human possibility, with no history to guide them, and with a courage to make themselves vulnerable that I find moving beyond words,”

and says this show had a “unique perspective on a powerful female who continues to thrive without ever apologizing for who she is.”

(even if who that is...is very sparkly).

Emily Skinner (who plays Cher’s mom in the show) says “She has zero pretense and we love her for that.” Skinner also talks about how her mom swapped out her Barbie doll with a Cher doll. “My feminist mother must have thought, let me put somebody in front of my daughter who is beautiful in a completely different way.”

Don't forget we have an autobiography coming and a 2020 movie in the works.

And the British documentary/biopic of Cher's life aired last Friday: The Greatest Showgirl. Where are all the reviews and screenshots of this?? Help a scholar out here!

All I could find is this brief Guardian review:

Cher was not actually born in the wagon of a travelling show, as this documentary proves, but she did have a tough childhood. There are more talking heads and dramatised scenes featuring unforgivable wigs than there are Cher interviews, but it’s still a reminder of her majesty. Hannah Verdier