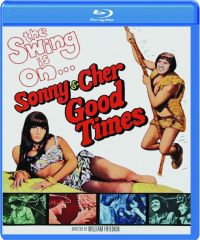 I totally missed this when it happened in 2017, but there's been a re-release of the movie Good Times. My friend Dave alerted me to the situation while we were in Amoeba Records in Los Angeles this spring. It's quite amazing and has me rethinking the movie.

It's extras include an interesting interview with William Friedkin describing how he came to the project and how it all came together. Friedkin talks about their guerrilla film-making (they had no permits) and how they filmed skits first in studio. Afterwards, they only had 45 minutes of film, so they padded it.

There's also a fabulous commentary track across the movie with film historian Lee Gambin who highlights things you’ve never noticed (or at least I never noticed): Friedkin’s mark on the movie, for instance with the chaotic edit of the wrestling scene, typical angles and shots, and subversive low shots. He comments on George Saunder’s "faustian" performance.

He references the western skit to the spaghetti western Ringo movies of 1965, A Pistol for Ringo and The Return of Ringo. He labels Friedken as a  documentary realist at that time, who dabbled in fantasy (The Exorcist). Sonny liked the hard edge of Friedkin and shared his sense of humor (note the Los Angeles parking signs on the Western street). He notes the crane work and says that, in fact, Good Times went crane happy.

He notes the "incredible dancing" in the western musical, saying the choreographer (who's name I couldn't catch: Andre T?) was one of the sharks in West Side Story. I like how they keep the whole body of the dancer in frame and long shots of the whole dance, which was the unfortunate issues with dances in Burlesque.

Gambin says the movie got a few good reviews. The LA Times said there were moments of Woody Allen brilliance and The Hollywood Reporter said it was the best directorial debut since Coppola. It might shock fans to hear that.

Gambin calls it a fun tributes to genre movies, full of beautiful colors. He said originally a Sonny & Cher fan was to write initial script but that took too long.

He describes he movie as a tension between artistic integrity vs. commerce, turning artists into commodities which is exactly what they don’t want to become. Cher is trying to get control of her own trajectory. S&C are reclaiming their turf. They are decidedly here not a rags to riches story, although I think it's curious that their variety show would recycle a rags to riches mythology for its “behind the scenes” fake documentary reels and skits.

Gambin relates the movie to the backstage musical similar to Vincent Minnelli's The Bandwagon, a genre about The Hollywood Machine. As always, Gambin insists that Cher owns her own presentation. He also doesn't deny the camp sensibility of the "It's the Little Things" video reel, and use of Batman iconography.

He also loves the studio lot scene where Sonny & Cher discuss their dilemma with the big studio and play with backstage costumes and props. Gambin calls this a place "where costumes have lost their meaning." The Hollywood Tzar, the studio wants to fix them." Note the part where they tell Sonny, “This nose will have to go” and remember the ongoing teasing Sonny gave Cher's nose on their variety show four years later. Interestingly, Gambin says that women in clown garb is rare. Is this true?

He equates the S&C script scene here with the one in The Exorcist.

Jungle Geno is Mikey Dolenz. I always wondered about that. Gambin notes that all Tarzan movies always had a “boy” who was young and athletic. So their elderly son is a joke on that convention. Animal trainer Ray Halfaster was used and Gambin says he was better than some (I'm assuming he means regarding abuse of his animals). Gambin reminds us that Saunders' role in this skit is a nod to the Great White Hunter and his coldness and malevolence. He notes the moving camera work in the chase scene.

Gambin says the detective story is a nod to Film Noir and was also the seed of Cher's Vamp. He likes the texture palette in this skit.

He says some Friedkin fans feel the songs in this movie drag on the momentum. But Gambin feels they give film time to breathe and are like soliloquy moments. They give the characters space to grow.

Overall, Gambin notes Cher's fiery acting performances in strong female roles (Jimmy Dean, Moonstruck, Silkwood, Mask) and says she is underappreciated as both a vocalist and an actress, having worked with many greats including Friedkin, Altman, Nichols, Bogdanovich, and Jewison. He says, "Cher songs are institutions" about race relations, the occult and people on the fringe.

After this, Gambin says, Sonny & Cher were hired to do the Speedway movie, but were replaced by Elvis and Nancy Sinatra.

I also noticed two things in rewatching this movie. First, how their LA house (in Encino) is surrounded by undeveloped land! Second, this is another movie with Cher playing herself and showing a disinterest in show business. What an amazing foreshadowing of the Cher story, as if her life were scripted. Gambin talks about how she later reinvented herself as a multi-medium business woman decades later.

The same Ward Lamb essay from the CD re-release booklet years ago is also included in the vinyl release.

You need to read Friedkin's autobiography for much more info Mary.