So much to catch up on, it’s been kind of discouraging and I’ve been avoiding it. Now that I’m getting back into a routine with work, we can get back to this multi-year-long period of Cher awesomeness.

The concert tour is doing very well, both sell-outs and fill-ups. View the attendance and receipts.

It's been a challenge for me to describe Cher-mania these days. I’m enjoying it but it feels so suddenly over-the-top. Like if we had gradually gotten here...I don't know. Maybe for fans so used to rooting for this underdog, praise never fully lands. I mean outside of acting raves (which were a new venture) Cher has never received raves for her concerts or albums.

Not that it’s undeserved praise, but still odd to get your head around it, historically speaking.

I mean, when a reviewer says “Cher’s still got it!” the first thing I think of is "when exactly did you admit Cher had it in the first place? I'd like to go back to that time and enjoy it." So why now are we getting a kind of make-up history that Cher has always been "triumphant." And there's a tone in the press that they've always thought Cher was great (which is complete revisionist history). I mean, I'm so glad we're finally here but I don't think they should be so self-satisfied in their phrase. Pretend like all that shade didn't happen.

I think what’s really going on is a new generation of people are reviewing Cher shows and possibly making the assumption that prior reviewers must have seen the obvious amazingness.  They did not. So, if you’re writing that Cher is dazzling, triumphant, fantastic, timeless, tour-de-force, force of nature, camp queen, fierce (my favorite compliment), masterful, bringing the sass and style, triumphant...(all from current review headlines), if she's indeed slaying the dragon, this is all news to me. Not that Cher is doing it, but that the press is saying it.

I keep thinking of this alleged quote from Willie Nelson: “If you fail at something long enough, you become a legend.”

Truer words could not apply to what we're seeing right now.

I've caught up on my concert reviews and if you want to bask in some good Cher press, here you go: https://www.cherscholar.com/concert-reviews.html 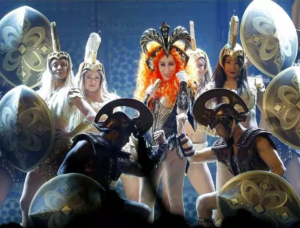