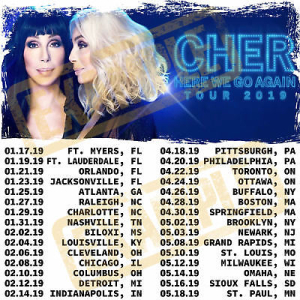 This may be the first Cher tour I will miss on purpose. Cher is so popular right now with the young people, tickets seem pretty expensive. But I'll see what it looks like when west coast dates are added. Cher rarely comes to Albuquerque so I'd have to travel to Phoenix or Denver. With a few songs popping in and out, this seems structurally like the same show she's been doing for decades and the set seems aesthetically similar to her ongoing Las Vegas show at the Monte Carlo. Compare them yourself. So I'm okay with sitting this one out. And anyway, I'm coming to see Cher concerts as an experiment in resiliency against concert reviewers. If you accept that the show is basically the same show since the Believe tour, you'll see a transformation in its reception. Reviews for the show in 1999 were not great. They accused her of being all style and no substance (as they always try to do) and this same show has lasted two decades, outlasting all those critics. It's the same damn show, people.

Reviews I've seen for this edition have been unanimously canonical. Let's follow the tour...

Michael Lallo of Melbourne calls the show “a masterclass in high camp.”

Lisa Rockman of Newcastle says “Cher proves she’s still a class act,” saying in Melbourne a “packed house is by no means guaranteed." She calls Cher "a woman who has had to reinvent herself to survive in a cut-throat industry. And she did it all with poise and wit.”

Belinda Cipriano also calls Cher “a class act and, at 72, a performer without peer.” She calls the show a “visual feast...the ageless diva had the audience eating out of the palm of her hand.”

An un-credited writer from Sydney said that show "sent fans into a frenzy...the show was suited to fans of all ages….an iconic show that will be hard to beat by her pop star successors, truly proving why she is the goddess of pop.”

Jackie Lymn of Adelaide said “what a show!” I choked on my hot chocolate when Lymn said the third act “got the 15-year-old in me screaming with delight” and was talking about Burlesque. Uuuugh. I’m...so...old. Lymn goes on to call the show “something spectacular" and that "the world is a more colourful place with this woman in it. She is an icon. A religion. A queen.”

Harriet Howard Heithaus of Naples Florida said “Cher brings a show, not a concert. If you want to see the creator of the sax licks behind her version of ABBA’s “Waterloo” and more than a short riff-fest from her lead guitarist while she’s offstage, this is not the show for you.” She mentioned Cher's “quick-change cos-play” (I had to look that up) and insisted Cher's ballads were taped but that she “still works hard to make [the $500 front row seats] worth the money.”

Vicky Sullivan of Orlando says “demographically it was such a mix of people, all I can say is that everybody was there….a full house that didn’t leave to beat the traffic.” At Cher’s descent, “it was one of those “wow” moments, you could literally hear people gasping looking up at her."  This article also interviews new guitarist Joel Hoekstra (fans are snapping and posting pics of him on Twitter so I knew he was a thing)...who played part of the Vegas dates and has been working with Cher for about 2 years, along with Whitesnake. Hoekstra says “I’m really honored to be part of her band. They are all amazing musicians. Some blessings in the music business you never see coming and this would fall under that category.” Aww. I wanna snap his picture now.

...actually she used to appoint comedians and that was pretty not awesome. But she did hire Wild Orchid back before Fergie was a household name.

David Mencomi of Raleigh said her open was “as fabulously gauche an onstage entrance as you’ll ever see.”

Rachel Bules of Columbus Ohio says “Cher delivers” and “I need to take a minute to talk about the physique and stamina of this woman. At 72 years old, she was dancing around on stage flanked by a squad of dancers at least 40 years her junior...The concert was a strong testament to strong women.”

Jerilyn Jordan of Detroit said “Cher made us believe in more than just life after love at Little Caesars Arena” and said the show was a “delightfully campy romp.” She continued with a good assessment of the show as it is: “throughout the night, Cher limited herself to minor dance gestures and toggled between stomping across the stage (in sensible footwear, mind you) and stationarily basking in the spotlight while supported by a bevy of dancers and elaborate choreography. Her voice, however, seemed virtually unaffected by her 50-plus-years as a performer and yes, her vocals were live (she laughed during a verse of 'The Shoop Shoop Song (It's in His Kiss)' and it was incredibly endearing) though, again, supported by some strategic backup singing....Closing out the evening, Cher gave everyone what they came to see and hear: "Believe" — her empowering autotune-heavy dance banger about second chances that is, even today, ahead of its time. Wearing a red wig, and a bejeweled, flapper-style, barely-there dress, and nude bra, and using less autotune than she did in 1998, Cher left us believing in something bigger than life after love, or anti-aging wizardry, or the power of reliable nipple pasties — we left believing in Cher.”

Some called her descending pedestal a “beautiful swing” others a”chariot-of-the gods-looking contraption." 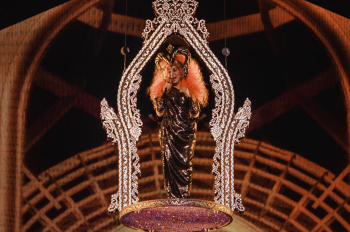 Anyway, you can find links to all the reviews (so far) on my concert reviews page.

The summary of tours is also available on the main tours page.