So part of last year's drama was we had to move suddenly at the end of summer. And we're old and so this was painful but we moved into a much nicer place with room for a Chersonian Institute proper and so all that ended up a good thing. And now we even have our our own mini-pedernal hill similar to Georgia O'Keeffe's because we're situated near the Albuquerque petroglyphs. 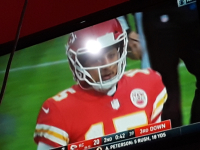 We've also been exploring our new neighborhood haunts. Once Saturday we poked our head into our nearest pub called Spinns and saw they were playing a Chiefs football game. The screenshot to the left is from that day watching our new celebrity player, Patrick Mahomes.

This was great and as I turned around I saw a big celebrity mural painted on the entire north side of the place.

And who should I see featured most prominently: Cher herself! She is portrayed as a waitress serving beer circa the turn of the decade. How strange and great! The likeness is pretty good, as Cher art goes. 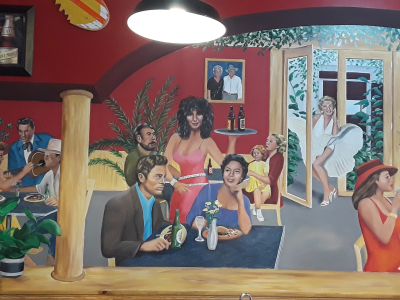 I even questioned at first if this really was Cher considering the waitress aspect,
but the outfit and face do indicate Cher circa the early 80s and who else has that face? 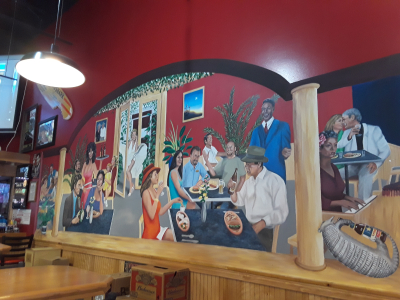 The full mural with Marilyn Monroe, Nat King Cole and some other celebs I can't identify. 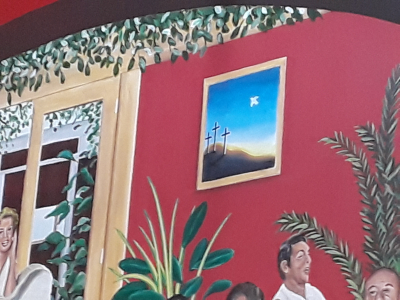 Parts of the mural are very New Mexico-ish, like this picture within the mural of a New Mexico-styled graveyard.

Posted at 03:30 PM in That's The Obsession Talking, What This Really Says About Me | Permalink | Comments (1)