The Here We Go Again Tour Reviews
Stories on the Sleeve: Take Me Home

Cher Honored at the Kennedy Center 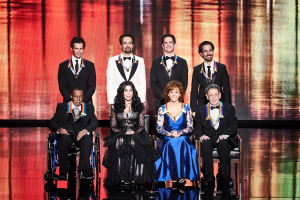 I'm way overdue to be blogging about this. I watched this show with Coolia in Los Angeles on a 10x10 foot screen but it was something I wanted to watch twice.  (click all pics to view larger versions).

When the curtain came up there was an ear-to-ear grin on everyone but Wayne Shorter, who was probably conserving energy, and Cher, who seemed stoically uncertain about the whole thing. But by the end there are tears like this: 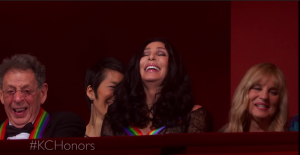 You can see Cher's sister Georganne behind her. Very sweet to take your sister to the Kennedy Center Honors!

It's tempting to fast forward to all the Cher parts but that would be bad, bad. There was a lot of stuff on this show to experience. Gloria Estefan hosted and talked about the Kennedy Center mission statement, to break down barriers, be trailblazing, a cultural phenomenon and how after all the dust of wars settles it will be those who contributed to the human spirit we remember. (Something to ponder after Adam Lambert's performance).

The Wayne Shorter tribute was a good lesson in American music history. E. Epatha Merkeson did an mesmerizing performance of Philip Glass' "Knee Play 5" from the 1975 opera Einstein on the Beach. All clips have been taken offline sadly.

Cher's tribute was last because she's...well, she's a showstopper. Remember when Cher won the Billboard Icon award in 2017,  Gwen Stefani called Cher "truly the definition of an icon," praising her inspiration as a musical trailblazer, cultural influencer, humanitarian and fashion trendsetter?"

Whoopi Goldberg quipped she raided Cher's closet ("and I'm award she wears it better") described Cher alongside Elivs and Sinatra, which seemed to surprise Cher herself but then Goldberg clarified that meant by one-name recognition. Oh. Almost a big compliment there. Then Goldberg went into a list of Cher's all the things, ending by saying not only does Cher "march to the tune of her own drummer, she's a one-woman band." Yeees.

The stage photos were a tryptic of Cher in 80s chainmail, a current ABBA performance, and a caricature I couldn't make out. No one has posted the montage yet. Those are always inspiring for Cher fans. In this one, Goldberg described Cher as "one of the coolest women who ever stood in shoes," an icon, a survivor, the mother of reinvention, a master of TV variety, an actress with one of the "biggest breakthrough film careers in history." Whoopi called out the powerful trio of Cher, her mother and her sister. Great, great stuff.

The band Little Big Town countrified Cher's hits, "Gypsys, Tramps & Thieves," and "I Found Someone." Women in the audience can be seen singing along, including Kristin Chenoweth. They also sang "Baby Don't Go" and the Hamilton gang were clapping along.

Amanda Seyfried also gave a tribute, talking about working with Cher recently in the ABBA movie and mentioning her LGBTQ activism. "You make people feel the world is a safe place" Seyfried said. 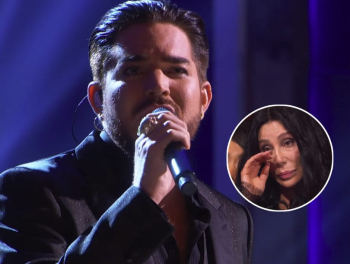 Then, Adam Lambert stopped the show with his version of "Believe." There were two performances that riveted people: Lambert's and Merkerson's Philip Glass tribute.  This got Cher very teary and she showed visible appreciation for his big, big, big note at the end. What I love about Adam Lambert (all the way back to American Idol) is his sincere ability to move between Queen and Cher with real cajones.

And they all stood up when he finished. Cyndi Lauper then did her show-stopping tribute to "Turn Back Time." Girls really got up for this one, most notably a trio of gleefully dancing women which included Reba McEntire presenter Kristin Chenoweth and Philip Glass presenter, Angélique Kidjo. They all high-fived at the end. 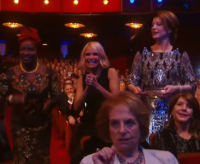 There was also this strange former honoree clapping very affectedly. Does anybody recognize her? 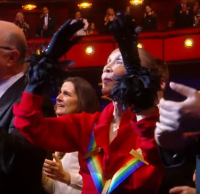 And Lauper and Lambert closed the show with "I Got You Babe" complete with replicas of the iconic Sonny & Cher Comedy Hour set. Reba McEntire sang along and couples danced together and it was really sweet although very few covers of that song work, including this one. 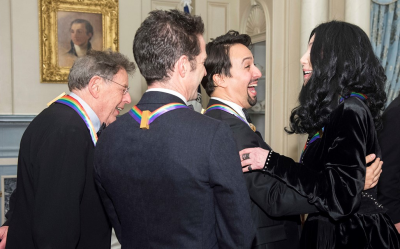 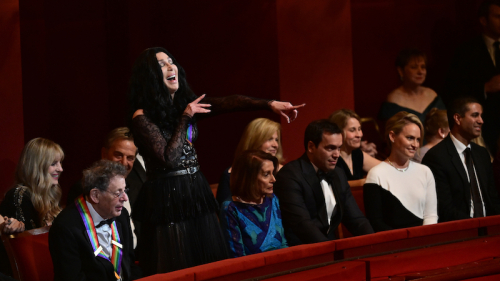 Congratulations Cher. You deserve this.

Posted at 01:52 PM in Concerts, Scholarship In Action | Permalink | Comments (0)