My Essay: Cher and the Rock and Roll Hall of Fame
The Here We Go Again Tour Reviews 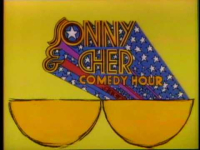 So a few years ago I started blogging about the Cher variety shows as they aired on Get TV. But Get TV was a major disappointment on many levels, which I've addressed ad nauseam in previous posts. Also then the world got very political and I was stretched too thin. And then last year and all its wondrous surprises happened. And so this year I've decided to try to cover each series in order (with episodes I've seen at least).

I've started an archive about the show. I'll keep posting the episodes here and do a blog post when I get through each season. I've just finished the short season 1, which was interesting to see how they handled a small budget and the beginnings of all the recurring segments like VAMP, the fortune teller, Cliff House and what they called "the cultural spot." I've seen many of these episodes about 4 times now and have gone from thinking they were the best thing God ever created on earth to finding them excruciatingly dated to coming around to seeing cultural relevance in them.

It's been a journey.