Mixed Bag of Honors and Accomplishments

First of all Cher's Believe album will be out on vinyl in December.

A few weeks ago Cher's album Dancing Queen made its debut on the Billboard album chart at #3. This felt disappointing as Cher and the fans were aiming for #2. Although the album did hit #1 in the list for Top Album Sales. And the song "Gimme! Gimme! Gimme!" reached #5 on the Dance Club Play chart. And the Gimme remixes were recently released.

So it felt a bit short at the time but my Billboard guru friend tells me I was off my meds to think this way:

"For me, I am super impressed with her position on the chart. The year is three-quarters done, so for her to have the largest week of sales for an album in 2018 by a female pop artist is a major achievement.  It means she sold more albums in her debut week than 20-something Ariana Grande, who is the hottest female pop star in the U.S. currently, when she released Sweetener a few months ago. It means that the only female in any genre to post a larger one week tally this year is Cardi B. Were this released four years ago, before they started incorporating streaming into chart calculations, she would have debuted at #1 on the Top 200 chart, rather than #3 (and #1 on the sales chart).  The last female pop artist to exceed this level of sales in a single week was none other than 20-something Taylor Swift who remains the biggest U.S. female artist of the last ten years.  Not shabby company to keep. The fact that it is a sales sum that has only been surpassed by one other pop artist this year (Justin Timberlake) is truly remarkable.

So that perspective was great. But then in week two the album feel from #3 to #43.

Anyway, there was another Billboard list that made me feel better again: Billboards list of 100 top musician performances in movies. Cher ranks #1. J. Lynch has this to say:

Cher’s Oscar-winning turn in the 1987 romcom Moonstruck remains the standard by which you mentally check all others. Cher brings that mixture of reluctance and romantic recklessness to the screen with a self-effacing realism and millisecond-sharp comedic timing. Few performances are this irresistible, hysterical and believably low-key -- and the fact that it came from one of the 20th century’s biggest pop stars leaves us unable to snap out of loving Cher in her deservedly Oscar-winning performance more than 30 years later."

And then there's the incredible Kennedy Honor. Maybe not in and of itself but for the fact that fans and Cher-watchers have been lobbying so long for Cher's simple induction into the Rock and Roll Hall of Fame. To be beset with yet a larger honor was fully unexpected. And a bit disorienting quite frankly. But what a big deal. As my friend Christopher described it, “the government's highest form of recognition for artists...its official intention is to identify and honor artists for their lifetime contribution to the culture of the United States. That is no small potatoes.”

Especially since nobody's been noticing Cher's lifetime contribution to the culture of the United States.

The awards will be televised on December 26 on CBS at 8 p.m. Eastern.

Some articles about the honor:

Here is the 2016 batch with some unsmiling Eagles (I take that back, 2/3 unsmiling Eagles), James Taylor, Martha Argerich, Mavis Staples, and the incomparable Al Pacino. 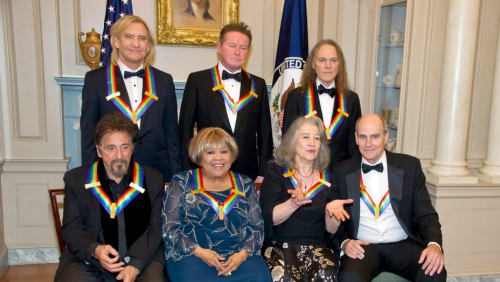 Here We Go Again bounces back to #32 this week on Billboards Top 200 and Gimme! Gimme! Gimme! rises to #4 on the Dance Club Play Chart. I'll do my best to keep this post updated in terms of her chart success. The#3 debut was outstanding in my mind too!

What you write is exactly how I felt about the whole thing...there were so many numbers being thrown around it gets confusing...but I am super proud of how well her album did and how much she and the crowds enjoyed her concert tour "down under". The Kennedy Centers came as a shock but a pleasant one at that....I am super excited about that above all that is going on with CHER this year. I wanted to show you a video edit I did for YOUTUBE, https://www.youtube.com/watch?v=dTaqjOtx5UY I fell in love with the song the first time I heard it so when I saw the video on youtube in a much longer clip from the CHER show I had it edited and posted it on YouTube. Bob Mackie is selling the gown she is wearing in the clip...it even traveled on the QE2 with Bob over to the UK for a promotional tour for the auction...ok in my mind they will play my YouTube clip of her doing this number on the Kennedy Center Honors...well one can dream!

Dancing Queen flies back onto the Billboard Top 200 at #36!