Cher On the Verge 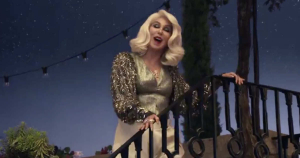 Between last November and today, lots of Cher news has happened, is happening. These days I feel like my posts are just roll-up lists of links. It’s kind of amazing (and daunting), but all these major categories below are all in play right now, not only with new stuff but the constant consumption and evaluation of old stuff! It's like her career is rolling up on itself.

Christine Baranski recently talked about working with Cher on Live with Kelly & Ryan. Cher apparently sings "Super Trooper" (with the cast) and "Fernando" (solo). I got overly excited about this news last week. I love ABBA and I also love imagining Cher singing improbable covers; but to put these two interests together never entered my head, even after it was announced Cher would be the movie. Either I’m very preoccupied right now (which is true) or this was a big imagination fail on my part. I still can’t really picture Cher singing ABBA.

Old Movies: Here's a story about "How Moonstruck got Italian Americans right." I was just in a new book club at a local tea room a few weeks ago and met a couple, Irv and Di, who had retired to Albuquerque from New York City and I asked them what movie they thought best captured New York City. The husband said he had never thought about that before and asked me what I thought and I said I didn't really know but that Moonstruck perfectly captured the Italian landlords I once had in Yonkers. He heartily agreed about Moonstruck and then came up with "Crossing Delancy" and "The Chosen." 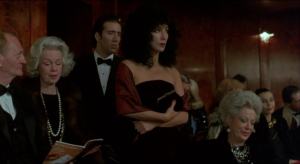 Bill Maher also mentioned Moonstruck in his February 16 episode as part of his New Rules segment covering conflicting messages men get about women from popular movies. Basically Maher was saying women seem to want more aggressiveness from men in movies, judging by the latest movies that are popular with women. In fact, women seem to want sexual advances from men outside of movies too, but only from those particular men they want advances from and not from the ones they don’t want them from. Arguably, this is an unsaid truth of the #metoo movement. And the obvious problem, Maher says, is that men don’t know which of these categories they fall under. Another unfortunate truth. Who can argue that human relationships confuse and contradict easy political solutions. Yeah, it sucks…and it sucks for everybody including women making advances and gay or bisexual men and men women trying to figure out who’s allowed to make advances to whom. Maher then lists some popular movies among women, movies with problematic plot lines such as:

And this list was very upsetting to me only because Moonstruck was the only movie I recognized! What are all these movies about even? So I can only speak for Moonstruck, a screenplay written by a man and directed by another man. So, clearly the story is a male idea. Women may have liked it (although I don’t remember that) but women certainly didn’t like it as much as they liked Dirty Dancing that year, (I had the unfortunate experience of working in a video store then  and can't begin to describe the absolute frenzy surrounding the lack of enough VHS rentals for that movie), or Thelma and Louise a few years later. I particularly liked Adventures in Babysitting at the time even though I had never babysat in my life and babysitting seemed as scary as the movie confirmed it would be.

But in any case, even if recent mainstream movies with un-PC plot lines have been popular among women lately, it’s not like we've had a lot of space on the marquee lately, in between all the apocalyptic and superhero titles. And if you punch in “popular movies for women” on Google, you get none of those mysterious movies on Maher’s list. “Legally Blonde” pops up first, followed by “Sense and Sensibility,” “Chocolate,” “Julie & Julia” (there’s not even a love story in there, is there?), “You’ve Got Mail” (I should really see that one), “Miss Congeniality,” and “Romy & Michele’s High School Reunion” among others. The only truly disturbing title on the list is “Pretty Woman.”

Anyway, this is not a new conundrum really. Alan Parson’s Project wrote a dramatic song about it in 1979, a song I sometimes fantasize Cher will someday cover. And since I’m on the topic of random songs I’d like Cher to cover, this guilty pleasure song is on the short list too. I’m not proposing Cher should make it with an over-emoted, shirtless video. But it’s inspiring in its way and sometimes very helpful messages come in over-the-top six-packages.

I found this brilliant video of what Cher sounded like to us when we were seven years old and had shitty record players.

And recently, The Los Angeles Times opined that if Cher’s song "Prayers for this World" was nominated, we could enjoy Cher dazzling us all on the red carpet this year.  But then nominations came out and the song was not nominated.

Remember that Cher track on that recent Wu Tang Clan album that sleazy pharmaceutical guy Martin Shkreli bought in 2015 for two million and wouldn’t share with anyone? Well, he’s about to lose it to the U.S. government which means we might someday hear it: https://noisey.vice.com/en_uk/article/bj543d/cher-wu-tang-clan-u-god-album-2018. 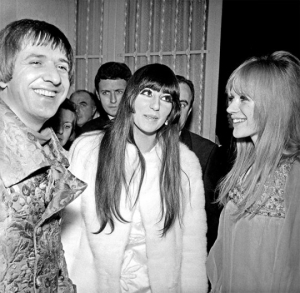 And here’s a thing! A video for "Il Cammino Di Ogni Speranza," the song Sonny & Cher sang during the San Remo festival of 1967. They met Marianne Faithful for the first time at that festival (see right).

Judy Hill from the band Girl recently posted videos of the performances she did at CherCon 2002 at the now-demolished Riviera in Las Vegas: 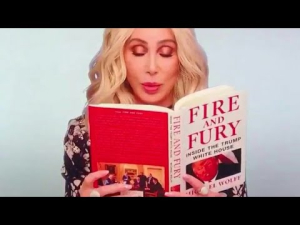 Cher, along with other artists, did a video for the Grammys spoofing readings of the book about Trump, Fire and Fury. Cher-scholar Tyler then reminded us that in 1966 Sonny & Cher were nominees for best new artists along with Herman's Hermits, They Byrds, Marilyn Made and Tom Jones (who won).

Cher scholar Tyler also found a clip of Sonny & Cher enduring comments about their hipness on The Carol Burnett Show.

"Experiencing Cher in Las Vegas" by Naomi Gall: "Not only was she worth travelling half way around the world to see but I’d do it all again – in a heartbeat."

An article in the New York Post about how the producers of the new Donna Summer musical are worried about the opening of the Cher musical. There was also an open call for the Broadway Cher show. Cher scholar Laura P. sent me this list of characters with descriptions from a Broadway casting site. The show has a new logo and early commercial. Tickets also just went on sale for the Chicago pre-shows.  It feels very meta, how they recognize Cher as a process. I like it! Here's a story about the designer behind the logo.

Cher scholar Tyler also found me this clipping about Sonny & Cher’s visit to Abilene Texas for a concert in 1967. 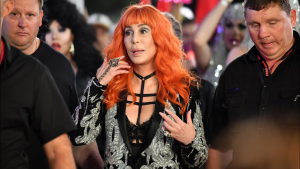 The big story last week was Cher's trip to Australia for the Sydney Gay Mardis Gras:

Every year for the past few years Cher has been selling Christmas merch on her website. For some reason this year that made news in Vogue and Good Housekeeping:

My friend Julie got me the "Ho Ho Bitches" ornament this year.

And like Linda on Bob’s Burgers, Mandy Moore dressed up like Cher for Halloween on her show.

Cher’s animal group made a video about Animals in Captivity.

She endorsed an Idaho politician.

She spoke at the January Women's March in Las Vegas:

Cher helped produce the short film Edith & Eddie which was nominated for an Academy Award for best short documentary film. Heaven is a Traffic Jam on the 405 won. Here's the trailer for that interesting one about an LA artist named Mindy Alper.

More stories about Edith and Eddie:

The Sonny & Cher house in Bel Air on Carrolwood is part of a Ponzi scheme controversy.

Sonny & Cher’s famous mustangs are back on sale. They go on sale so often, I’m convinced they must be haunted by Sonny.

The 1970s girl band Fanny has been making news again with a reunion record!

(Thanks to Michael and Mr. Cher Scholar for those links.)

Chaz Bono talks about his acting experiences and projects.

Cher is suing the owner of the LA Times.

Hashtags connected to Cher has been coming up lately, including these two:

Las Vegas also honored Cher recently by choosing "Believe" as one of the songs that will play during the Bellagio fountain show. I have to admit the light show song combo is more moving that I anticipated. The boom-boom-boom you can feel viscerally even in these fan video captures. Cher’s in some rarefied company for this Vegas institution.

Family Guy did an episode that was basically a satire of three directors: Wes Anderson, Michael Bay, and Quentin Tarantino. The Wes Anderson spoof is at minute 7:14 and it satires his quirky pop covers with a German version of “I Got You Babe” at minute 11:02. The song is “Bleib Bei Mir Babe” by Wirtschaftswunder. (Here's a more contemporary live version.) 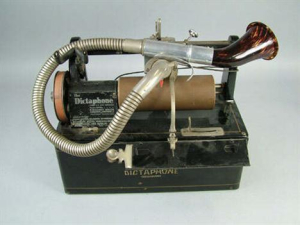 Doing research for a novel, I was reading a cheap anthology of short stories about ghosts and came across one called “Dead Media” by Nick Mamatus. In the story, a girl named Lenore goes to a Liberal arts college called Miskatonik. She meets the college A/V nerd named Walt who attempts to help her trace back an audio file of a chanting ghost through all sorts of media platforms. They go from an archive of mp3s to DAT tapes of a cassette of reel-to-reel tapes of a 78 record of a dictaphone cylinder. At first, the author had me enraptured with this very nerdy premise and commentary on every-changing media. The characters ended up recorded a voicemail to a dictaphone cylinder in order to debunk the

“vibrato buzz of the sort that made Walt’s molars cringe in his mouth, like auto-tune, a nail on a chalkboard. Walt didn’t hear it so much as feel it.”

Ugh. Auto-tune snobbery inside this fun technology ghost story. What a bummer.

At the end of the story, the author changes the point of view from the nerdy Lenore character to a girl who went on the same search back in 1977 and is now a ghost who murders Walt and Lenore on behalf of Mi-Go aliens

“from Tche, a great, gas giant in the Oort Cloud, a cold and squishy minor planet like Pluto.”

It takes four pages at the end to basically say the aliens did it, the kind of plot cop-out and genre whiplash that always makes my molars ache.