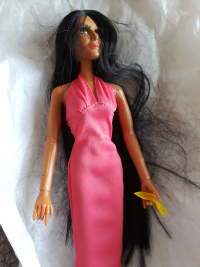 So this story (finally) broke last year at Christmas, controversy about Bob Mackie and Cher's use of the Half Breed headdress and Cher's presentation as an Indigenous American or American Indian. And I knew I would need to address this story next but I've been putting it off, not because I didn’t want to talk about it, (because I do), but because there is so much to say, so much complexity in this social situation. Could I even sort through it? It involves liberals attacking liberals, it involves conservatives stirring the pot, cultural appropriation, contested appropriation and hundreds of years of history. 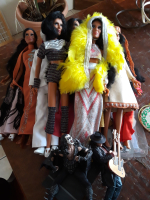 I took this image above of the Cher doll as I was taking down my Cher Christmas tree. Amazingly, one of the headdress feathers became caught in the hand of "out-of-the-box" Cher doll, and the image uncannily expresses my ambivalence and sadness around this issue. I'm calling the picture "VAMP with Cultural Feather." That lead me to take this "Sad Stack of Cultures" photo to the right.

I also thought about starting a poll on the controversy but got stumped imagining what question I could ask. Are you Indigenous American or American Indian and offended? Sounds kind of offensive and who would take a poll like that? I’m just hoping for some essay from Indian Country Today to surface on the issue.

So let’s begin with full disclosure, I’ve been a Cher fan for a long, long time and when I was a kid in the 1970s, I thought Cher was and American Indian until I was about 8 years old. I finally found her biography in the local library in St. Louis. And so since then I’ve considered Cher to be half Armenian and half 1950s blond bombshell (although her mom was not a natural blonde). Do most people even know Cher’s heritage? How many have read her biographies? Probably very few. And many may still assume she's Indigenous American (I'm going to stick with that term). 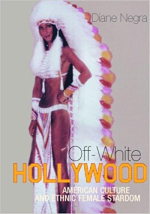 ince the 1960s Cher has been interested in and wearing Indigenous-American-inspired clothing, sometimes on stage, sometimes to major events, sometimes at home. When Sonny & Cher started appearing on variety shows in the last 60s, they started theming their jokes around Sonny’s Italian-ness and Cher’s Indian-ness, to use their word. This was ramped up in their own television shows of the 70s. Cher also moved in and out of other culture areas in her TV performances, including French, Hispanic, American Indian, Japanese, Chinese and African American. Diane Negra talks about Cher’s fluid ethnicity in her book Off-White Hollywood, American Culture and Ethnic Female Stardom. She essentially labels Cher as ethnically indeterminate and therefore map-able to many ethnicities. The cover of the book boldly advertises Cher in the Half Breed headdress.

This flexibility is either a good thing or a bad thing, depending upon if you want Cher representing your community or not. And the gravitas around the issue has evolved over the years. Before the 1970s, ethnicity was avoided on TV or un-apologetically appropriated. In the 1970s, consciousness was being “raised” about the value or “coolness” of ethic differences and this was often explored on hipper TV shows. Looking back now, from where an authentic identity has much more bitcoin, exploration and celebration look very similar to the earlier appropriations.

For years I’ve been wondering how Cher’s identification as Indigenous American and her choices to wear Indigenous-American-inspired clothing has landed from decade to decade. Older Native Americans seemed hesitant to weigh in. But younger activists seem to be taking more offense, but still below the level of what Paris Hilton (Halloween costume) and Wayne Coyne (stage costume) received a few years ago.

The issue is complicated for many reasons:

The Trump connection further complicates the issue for sure. (from Jezebel.com)

“In 2017, nobody in their right mind would take this seriously as an emblem of Native American cultures......except Trump’s new Canadian/American pop star appointee for Native American Ambassador on the National Diversity Coalition! Former Pussycat Dolls member Kaya Jones!”

Those being millennial Indigenous Americans. I don’t feel there’s anything wrong with their feeling what they feel. Why should they remember cultural work that may or may not have happened in their lifetimes? All they see is Cher appropriating.

When Cher was on prime time American television she was a cool, hip superstar and giving airtime to images of minority women rarely seen elsewhere on prime-time, glamour television. Young girls and boys were seeing that and influenced by it. But that was cultural work done then, a perishable credential.  Some day we may look back on the cultural work of Will and Grace and see it as stereotypical, too.

I’ve always had this gnawing feeling that Cher was somehow “getting a pass” on her “Indian look.” Why, over the last 50 years, was nobody was calling her out on it? That's not to say I didn't like it. But it’s impossible to believe that there have been no American Indian ticket-holders to the last two decades of live shows that have included the song and the headdress.

This was a bizarre related incident. I went to a show in 2013 with a white, Gen Y girl who became greatly offended by Cher’s Eastern Indian sari worn for the song “All or Nothing.” But she had no strong feelings whatsoever about the ceremonial Indigenous American headdress. (I've included a few existing articles below.)

I’m guessing here that Cher’s Indigenous American fans are older and this makes me think younger fans are feeling more offended because they have zero context to Cher’s persona in the 1970s. I could be wrong about this but there does seem to be a response difference in age groups. And newer kids have no context to “the way things were,” which has always been a thin-ice defense as it is.

Quite possibly the idea of Half Breed has outlived its previous pass. Which is making older fans feel very sad because they believe Cher as Indian was doing cultural work. (But maybe it’s also doing cultural damage now.) Older fans also feel the headdress is beautiful and they nostalgically love it and feel bad hearing that their love of something has been construed as bad or wrong. Do they then not have agency to love or appreciate? I feel for the fans here, too.

And that the whole issue beginning as a continuation of anger over Trumps position vis-a-vis Indigenous Americans just makes it all the more tragic, because the headdress issue has been lumped in with frustration over the status of the Keystone Pipeline struggle, Trumps dismissive Pocahontas comments, and his choice of an ambassador a woman with dubious claims to Indigenous American heritage.

“If you're Native American, there's a good chance that you've thought a lot about blood quantum — a highly controversial measurement of the amount of "Indian blood" you have. It can affect your identity, your relationships and whether or not you — or your children — may become a citizen of your tribe.” (NPR)

So what a mess it all is. How can we even separate out all these issues for a second. Again, I keep waiting for a good essay on the Cher problem to appear somewhere. I want a method to proceed, guidelines, context, a way forward. But unfortunately life doesn’t always work that way.

As a word nerd, I’m inherently interested in the evolution of offensive words, including a word like “costume.” We learn in etymology class, that culture is impossible to promote, protect or contain. That’s why it’s so hard to get everyone to use a certain word or not use a certain word, like “costume” or "Native American" or even more offensive words like whore and retard. It’s also why we keep wanting to “dress up” like nuns and ceremonial chiefs for celebratory events. Sometimes when you’re trying to learn or appreciate another culture, you try to wear another man’s hat.

You can say tone means a lot, but quite often even the tone is all wrong. And policing tone is full of problems. It’s unfortunate but culture has a massive mind of its own. Not that we should just let that stand and endure. But we should recognize that not everyone gets the memo, literally. But even emotionally and intellectually. Teaching empathetic understanding takes work, much of it teaching concepts that are abstract and painful to deliver and receive.

The fact that many conservatives dismiss word politics has to be addressed here as well. I have no doubt that if Cher was a member of their circle, they would be defending the Half Breed headdress to the ends of the earth, as part of their ongoing fight against the “scourge of political correctness.” In this atmosphere, other liberals become easier targets because they care at all. Which makes the headdress another casualty of the recent heightened awareness of Trumpian offenses.

So yeah, it’s 2018 and we’re focusing on micro-aggressions, which should be a good thing. We’re finally getting to the micro stuff, unintentional but still hurtful stuff. Problem is we’re losing focus on the macro-aggressions, which in no way have been wrapped up: discrimination in marriage, jobs, housing, physical violence, bullying at an all time high. Our energy seems frayed and raw right now. Do we keep finishing work on the macro but not stop work on the micros?  Will the macro ever resolve itself? Will racism ever stop happening?

Another issue with liberal call-outs is when critics offer no way through. What is acceptable behavior between cultures? What are we working toward? We need examples of that and we need it on TV. What was so great about 1970s television as it began to integrate, (projects of which Cher was a part), was the fictionalization of race issues and examples of how to behave correctly. We’ve completely lost that with network and market-designed segregation of television programming and the self-segregation that occurs with too many segmented channel (and online) choices.

But if there’s no way through for offenders or victims, what could possibly change? Confusion and paralysis sets in. “I’m drowning here and you’re describing the water,” misogynistic Melvin Udall says in As Good as it Gets. At some point, calling out all the drownings becomes absurd.

But I can hear the response: “it’s not my job to find a solution to the world’s problems.” I wonder whose job it is. And if it’s nobody’s job officially then it’s everybody’s job. So it is your job, long story short. And adding one more voice to the chorus of complaints will do nothing but ensure all our future suffering, and the suffering of all our friends.

Some discussion of the issue to date: