What a Cher year it's been, starting all the way back in January with "Prayers for this World."  It's a bit overwhelming and I can't believe I haven't blogged since Halloween! My own Fall has been crazy with three sets of house guests and the production of a new political poster for the my art action group ArtBrawl (we decided on a name last summer). We also recently launched a Facebook page that has been tracking our goings-on. Two weeks ago we started screen printing.

For Cher this seems like a critical mass era where she’s producing a plethora of new things, all while older work is getting re-evaluated constantly (her fashion, songs and movies).

Bob's Burgers did a tribute to Cher on their Halloween episode. Technically Linda is dressed as a "Cher-iff," a sheriff dressed like Cher (or Cher with a badge).

Linda explains her costume as having “handcuffs, a badge and a body that just refused to age!” She also wears a diminutive cowboy hat. “OH, I LOVE her!” she says and then says to Bob, “Snap out of it! From the movie!”

Linda stays in her Cherfit for the whole episode. The outfit is basically the Turn Back Time V-fit with extra Linda coverage, darker stockings and the leather jacket and Cher’s own latter-day boots. I appreciate that the cartoonists put Cher in the original Turn Back Time V-fit and not the concert version hole-fit that everyone now associates with the song.

While searching for show clips I also came across this story about Ellen wearing the hole-fit version a few years ago. They're very different outfits and now when Bob Mackie talks about designing the Turn Back Time outfit I have no idea which outfit he's talking about. 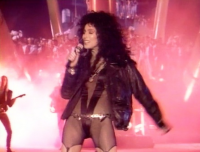 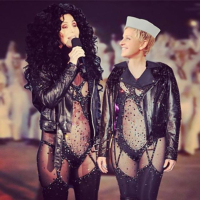 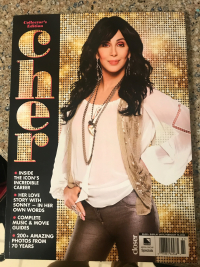 Closer magazine came out with a Cher tribute issue in November which is pretty good. Some new pictures and stories inside. There have also been some new online articles about Cher like these on motherhood and retirement.

Cher has been busy with social and charity causes. She's working with Ben Stiller and others to get supplies to Puerto Rico:

Cher also took part in an auction for veterans on Veteran's Day.

And (thanks to Tyler again) here's a found clip of Cher's interview at the One Young World Conference where she launches Free the Wild and talks about how she's been working with Bob Geldof's manager to launch the animal rescue charity. She talks about her fake fur and a few rescued elephants.  She also says the song "Walls" was from "Believe" producer Mark Taylor.

In the Twittersphere, Papermag has also offered "A close reading of Cher and Rihanna’s Twitter Exchange"

Las Vegas: There's Las Vegas and then there's the original Las Vegas. I went to them both in the last few months. The older one is actually in New Mexico, an old west town rougher than Tombstone. Mr. Cher Scholar got his masters in archaeology there a few years back (which is why we live in New Mexico now). We took Mr. Cher Scholar's brother to The Plaza Hotel there to do some ghost hunting. Mr. Cher Scholar's brother even has ghost hunting gear. There also happened to be a Halloween party there that night. 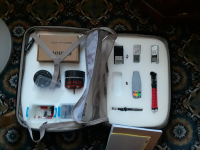 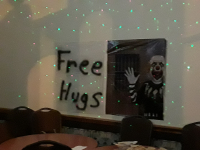 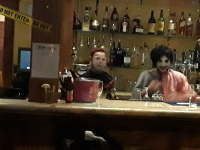 A few weeks later we went to the other Las Vegas where I finally saw the November 11th Classic Cher show. Our seats were not as close as the cancelled show seats we had in spring, but they ended up being better seats than I thought. Cher opened her monologue with "You've probably planned a long time for this." Tell me about it! I was shell shocked the whole weekend worried about a cancellation. Sigh. Sometimes I think I just want it too much. Cher talked about mid-era Sonny & Cher days working show rooms and living in Motel 6 like motels with Cher attempting to cook their diners in the rooms.

It was a great show. I particularly liked the new graphics for "Walking in Memphis" and "The Shoop Shoop Song." 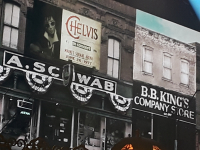 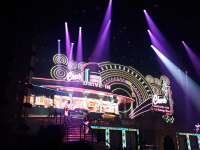 I really loved the faux Cher Vegas sign. So retro and fun!

News about the show:

There's a page for the Chicago shows of The Cher Show. It would be nice to see a bit more of the performers involved and a better logo. An article from Junkee on the show which captures a lot of her tweets related to it.

"Ooga Boo" is now for sale and when you buy through smile.amazon.com, money goes to charity.

Cher did an interview for the BBC ostensibly about her new song "Walls" but the interview is kind of fluffy and truncated before we get to discussing the song.

Cher scholar Robrt found this 2016 commercial that uses Cher’s 1967 song “It All Adds Up Now.”

It was announced that Cher will play the part of Meryl Streep's mom (in flashback) in the sequel to the movie version of Mama Mia. 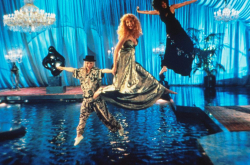 A great article about Witches of Eastwick seen from 30 later. 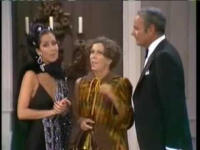 My favorite Cher wig is the multi-bun. It's best seen on The Carol Burnett Show. Here's a clip of the sketch.

I heard news that the Get TV Cher shows were coming back. But there's no sign that they will air any new episodes. Last night they played the same Christmas show they aired last year.  This run of shows has been mildly disappointing.

But we can console ourselves with this: Cher scholar Tyler located an opening segment of Laugh In with Sonny & Cher. See Sonny in his groovy scarf. And wow! Some Cher eyelashes there! Cher also gets on a bike. Here's another Laugh In segment with Cher and Tim Conway.

And the full episode of Sonny & Cher on The Glen Campbell Show.

And another tribute to Sonny & Cher on David Letterman 30 years ago!

Ode to an Idol: https://www.image.ie/fashion/in-ode-of-an-idol-the-iconic-and-timeless-wardrobe-of-cher-88368

The New York Times ran a story about a republican mayoral candidate who happens to be a big Cher fan.

Cher is planning to release more Christmas merch on her site soon. See the products on her Twitter. It looks like the themes will be Chercophanie and Black Rose. You can still buy scarves, too!