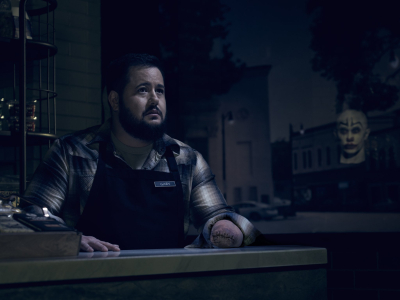 So my summer break was longer than usual. My parents came to stay with us for 5 weeks while waiting to move into a new house in Ohio. I’ve also been taking stock of my writing projects and realized I’m way behind in my self-imposed schedules. I don’t know how this will effect the blog.

But despite the big break, I’ve still accumulated so much good stuff to share. I’ve been working on some new scholarly projects that I’m excited about and will unveil a few (on Cher Scholar and Big Bang Poetry) over the next few weeks.

But as happens every summer, lots of Cher stuff has gone down.

Chaz Bono has returned to the American Horror Story franchise this year as a one-armed Trump supporter and there are rumors that Cher will be making an appearance this season as well. The rumormongers:

The hate-crime, fascist stuff, not the clown, has scared me right off watching the new show on anything slower than 15x. When entertainment is that close to reality…I’m just a jellyfish I guess. However, I'm going to see Stephen King’s IT movie this Thursday and I’m sure that will be much more pleasant.

You can collect Chaz’s appearance on AHS #6 Roanoke which goes on sale for DVD and Blu-ray October 3. 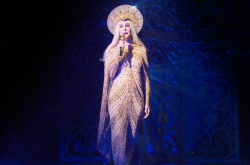 Cher started up her stage shows again. Here are the latest reviews on that:

Cher’s new Broadway show had its open call in July and over 500 people showed up:

They predict a Spring 2018 opening: http://www.goldderby.com/article/2017/cher-broadway-musical-tony-awards-news/ 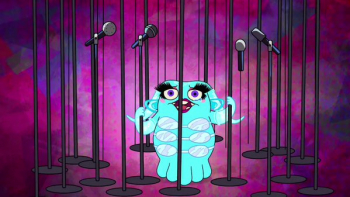 Cher made an appearance on a children’s show called Home: Adventures of Tip and Oh and recorded two new songs.

Reviews speak for themselves:

“Cher seems to be particularly picky about what she's recorded in the last decade. There was an album in 2013 (Closer To The Truth), a contribution to the soundtrack of her 2010 film Burlesque ("You Haven't Seen The Last of Me," by the acclaimed Diane Warren), a contribution to the documentary Cries From Syria, a duet with her mother, and a couple of unreleased collaboration (with Lady Gaga and Wu-Tang Clan). She has not been particularly prolific, and this might be considered her first dance floor jam in at least four years.”

“To be a fly on the wall where this bonkers song was pitched to Cher... We’re still not sure how this track came to fruition, but we’re not complaining either: somehow the 71-year-old sells this campy trap song.”

Yes, I had to look it up. Trap is “southern hip hop with ominous lyrics, double or triple time divided hi-hats, heavy kick drums and a Roland TR-808 synthesizer or layered synthesizers.”

“We love Cher. Not only for her amazing back catalogue, her brave fashion choices or constant trolling of Donald Trump on Twitter, but also because she still has the ability to surprise us with her music” and “gloriously psychedelic video.”

“It transcends traditional kiddie fare, however, with the demented electronic production, heavy lashings of auto tune and an annoyingly catchy chorus. It’s the not the comeback we wanted, but it’s probably the comeback we deserve.” 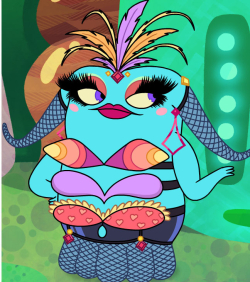 The Animation Podcast review was hilarious.  (Thanks to cher scholar Tyler for the find).

Animation aficionado ElectricDragon505 had his mind blown by the cartoon, not because of the story or Cher’s appearance on it, but because of of her character’s design. He says it reminds him of a “drill sergeant in Full Metal Jacket” or a mutated marshmallow. “What the fridge am I even looking at!” he cries. He likes the Boov characters and their bright, cold colors with flashes of hot yellows, oranges and reds but says the makeup is “even too much for a drag show.” Too much are the comically huge eyelashes and fishnet leggings because the fishnet leggings are even on Chercophanie's ears. (I would agree with that; WTF.) But ElectricDragon505 will even give the designers a pass on all that. What he absolutely can’t abide is a Boov wearing three bras because this forces questions about Boov anatomy that he just can’t face.

This all seemed like a great deal of news for an appearance on a Netflix children’s show, so I did a search for her last un-released but kinda-released song from January and oddly there were zero news stories or reviews about “Prayers for this World” on two pages of Google results except this short blurb:

“First new material since 2013 From a documentary that debuted recently, she is singing with the Los Angeles Children's choir. Absolutely amazing!”

My parents gifted us with Netflix. So I watched the Chercophanie episode last week.

The show is about an interracial or inter-galaxy friendship between a spunky preteen black girl (Tip) and an alien Boov (Oh). The episode is called “Chercophanie/Oh Man & the Sea” and it contains two 15 minute stories. I spent time bemoaning the short attention span of “young people today” as I was watching it and then realized I spent my own childhood binge watching 8-minute Loony Tunes cartoons.

But anyway, Tip is full of artistic torment for fame and glory. Unfortunately, she feels a lack of desire to actually practice singing or guitar playing. But she wants legions of fans, like, yesterday! And she tries to make a big splash as a street singer. The humans hate her performances but the alien Boovs love it. By the way, all Boovs look like octopuses.

Tip loves to talk about “star power” and she calls her fans Tipsters. Cher descends into the scene as “a true star who knows how to make an entrance.” In fact, the show gives Cher’s Boov character plenty of funny entrances. She’s “a cultural enigma” they say but she’s never given the chance to tell Tip and Oh what her true passion is. Spoiler alert: it involves whale-shaped Ooga Boos…which finally explains Cher’s new song then.

But sadly, the public doesn’t care about Chercophanie’s passion and only wants to hear her “rockin voice.” There’s a very funny bit where Chercophanie cries and her massive mascara runs down her face. A makeup Boov rushes in to fix it.

Chercophanie calls Tip “Twinkle Pie” and takes Tip and Oh to her studio to hear her latest track, “Ooga Boo,” and my parents left the closed-captioning on Netflix so I was able to decipher that confusing lyric: “Moi a tu.”

Tip is over-confident and when she finally hears herself play the guitar, she’s mortified, even after Chercophanie tries some funny production magic. A few times I laughed out loud at this stuff: Boovs crowd surfing, Boovchella. During performances, Tip likes to yell out “how many of you out there have faces?” 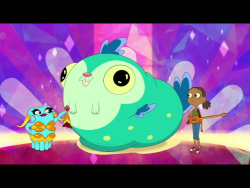 Chercophanie tells her not to be worried about the reviews, just be you…because following your heart is “where you find true art.”

Fans of Tip, of course, hate the result of that sort of advise and abandon her new direction. One fan calls out, very disgruntled, “my expectations have been defied!”

Cher fans, you’ve been there.