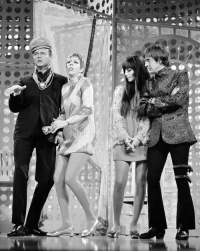 So much good TV history stuff this summer, but I’m a bit frustrated with the ever-repeating reruns of reruns that is Sonny & Cher on GetTV. For all of you who didn’t kill yourselves to get this channel, you can rest happily. As a consolation, GetTV has provided a quiz on their website: Are you more Sonny or Cher? I scored as Cher: a free spirited, outspoken, wise cracker.

Over at the other beloved re-run channel MeTV there is a story about Classic TV Stars Who Are Still Touring and 10 Iconic Facts about Cher.

Cher scholar Tyler discovered this delectable early Carol Burnett Show episode with Sonny & Cher from the mid 60s. The full episode includes everything (the solo of "You’d Better Sit Down Kids" and the duet "Living For You," plus the big finale number) but Cher’s solo is missing audio.

For that solo, you have to visit this other link. Carol Burnett introduces Sonny & Cher as part of a “wild, way out movement [hardly]. They country jam this groove-fest.

Cher comes across as a shy, morose teenager in these numbers and at one point actually creeps off the set. Sonny tries to be so groovy, but WTF is he wearing on his leg? Cher’s correct, though, he has very nice hands.

The big number (at mark 45:10) is really something to see. Cher in very shy and unsure as Carol Burnett and Nanette Fabray exhibit the kind of duo chemistry that makes Cher look like a big third wheel. It’s exactly the same shut-out that occurred in 1975 between Cher and Tina Turner, when Kate Smith looked like the third wheel in the big Beatles tribute.

Magic on The Cher Show

Another great find (thanks to Tyler) was this Cher Show appearance by magician Mark Wilson. Cher plays his assistant. It’s pretty cheesy by today’s standards, there’s a big overhead of assistance, lame jokes and is that Gloria Steinem in the un-enthused crowd? 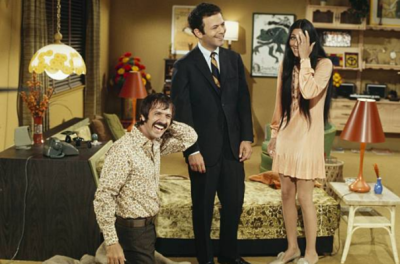 Truer than the red, white and blu-oo-oo! The full episode of Sonny and Cher’s appearance on Love American Style from January 1971.

It’s called “Love and the Sack.” I loved this show as a kid. This time I noticed how goofy and Mary-Tyler-Moore the set looks: a wicker chair, peace sign art, 1960s plants, and the ubiquitous guitar in the corner.

Cher (as April) is waiting for a surprise marriage proposal from her boyfriend Henry. A sack arrives with Sonny in it, postage due. Sonny says, “I mailed myself to you” as if that’s not a creepy-stalker thing to say. Stranger danger!

Sonny, who’s name we never learn, tries to convince Cher/April that life with Henry would be a mundane affair of track housing, missionary sex and too many babies. Meanwhile he has a motorcycle, a loft in the village with a bathtub sofa, (I looked that up and found nothing but a slew of bathtubs converted into sofas), and promises her a Turkish-bath honeymoon (I looked that up too).

So Henry shows up and Cher says “get back in the sack!” See, in the 60s, sack was a double-entendre. Anyway, Henry comes in and offers to take Cher out for Cock-a-doodle Chicken. (This show is so randy!) And bingo, all of Sonny’s predictions come true. Henry IS a stiff who wants her to be a baby factory. Henry calls Sonny a bag of soft potatoes and calls Cher/April a kook and a weirdo for having a man in a sack in her living room. Sonny tells Henry to offer Cher/April “Italian sausage.” I kid you not.

Cher and Glen do one of their last medleys (of many) together. 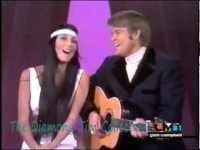 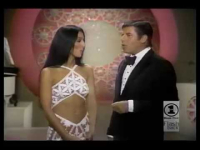 Cher made the Rolling Stone list of sexiest videos of all time. 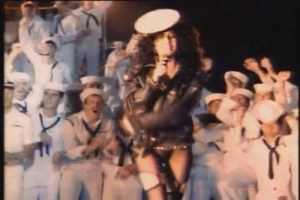