Gregg Allman and Cher
The Smell of Cher 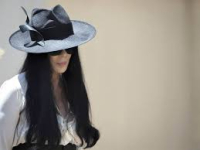 Cher attended Gregg Allman's funeral a few weekends ago and it was a much quieter affair than the one we remember for Sonny; but fans still managed to insinuate themselves along the periphery of the procession route and around the edge of the cemetery (see below).

It appears Elijah was there as well, although not fully photographed or mentioned.

Cher scholar Robrt Pela also located this very sweet retrospective of Cher and Gregg visiting a high school in Buffalo in the 1970s.  The story probably gives us more insight into their relationship that any of the other retrospectives that have surfaced of late.

While I was at the dermatologist last week, I spied a recent People Magazine (June 12, 2017) obit on Gregg Allman with a picture of Cher and Gregg in lower right corner of the cover. The table of contents declared the article was about "Gregg Allman: His Live and Loves" of which there were a few, but the article was exclusively about his relationship with Cher, "the glitzy variety show hostess" who met "the hard rocker from Georgia with a howl soaked in Jack Daniels." 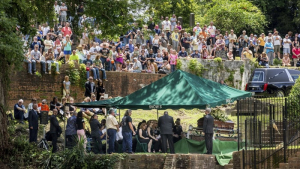 According to People, Allman spent 11 stints in rehab and became sober in 1995. His nicknames were Cooch and Gui Gui.  Not to be confused with Gris Gris (from "Walk on Guilded Splinters"). They met, as we all know, at The Troubadour in Los Angeles where Allman said Cher “looked like an Egyptian idol.” And Cher said “I never loved anybody the way I loved him." But that "Gregg needed more than my love.” (which is unfortunately the Boilerplate summary of a music star relationship: see Victoria Principal on Behind the Music discussing Andy Gibb for the most infamous version.)

The relationship started working, Cher said, “when he found out that I was a person—that a chick was not a dummy.” Incidentally, this is the same realization Gene Simmons was made to come to in 1979. Cher: transforming sexist rock stars, one man at a time.

The Country Music Awards opened this year with a moving tribute to Gregg Allman: http://www.huffingtonpost.com/entry/country-music-awards-open-with-powerful-gregg-allman-tribute_us_5938f2e6e4b0c5a35c9bfb75

And Cher fans have been discussing their feelings (then and now) around Cher's relationship with him. Full disclosure: she was about to separate from Gregg Allman at the moment my older brother unceremoniously and gleefully informed me (at age seven) that Cher was no longer married to Sonny and I cried in a chair for an hour before moving on with my life. I didn't learn about the Allman marriage until I was old enough to read a Cher biography.

But Cher scholar Michael put it very nicely: "I'm happy that I come to Gregg through Cher because I'm not sure I would have found Cher through Gregg. Cher has recorded so much in her career. In the days of album credits, I learned who wrote those songs she recorded. Because of Cher I discovered Dylan, Donovan, Gershwin, Tim Hardin, Neil Young, Buffy Saint-Marie, and a long list of others. Cher may not think that she has made a musical impact, but I know I've been forever in her debt for my early musical journey."

I would agree. And would add that when I was 17 I went on a journey to locate from my local public libraries, every original version of a song Cher had covered. There were so many, I never finished. But it's an interesting exercise to think about other artists you discovered by being a Cher fan. If you need a refresher, take a walk through the writers list, album by album, starting with https://en.wikipedia.org/wiki/All_I_Really_Want_to_Do_(album) and https://en.wikipedia.org/wiki/Look_at_Us.

I can tell you this, I would never have tried to track down Edith Piaf's version of "Milord" or bought a Miriam Makeba CD in Paris had it not been for Cher.

I *knew* that was wrong but I couldn't find my way to the correct brothers Gibb. The fog of elderliness!