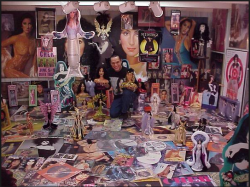 It’s very exciting for me when my poetry and Cher blogs overlap. That’s the kind of nerd I am. And they have been overlapping lately.

I finished another year of the NaPoWriMo (National Poetry Writing Month) challenge, which involves writing a poem a day for the month of April. No easy feat, especially when you commit to following the prompts, which I did this year.

The prompt of April 26 was to write a poem about how an archaeologist in the future would make sense of our culture. In my poem, archaeologists uncover my garage full of Cher memorabilia. To the left is a picture of Cher scholar Javier Ozuna's very fine Cher collection. Mine is not nearly this extensive but imagine archeologists coming upon this scene and trying to write up a thesis on it.

It’s rare that I do a Cher poem. I don't know why. I think I’ve only done two really crappy ones and those were over 20 years ago. I called this poem “The Relics of Very Tiny Religions.”

I'm back to enjoying the Cher/Sonny & Cher shows on GetTV. There have also been quite a few skits that are new to me. Either previous TVLand of VH1 episodes skipped them or on was a fully new episodes for me.  This segment floored me. It's a bad recording from a bad recording but it’s Cher reciting the poem “If” by Rudyard Kipling.  Cher references the cartoonist Sergio Aragonés, who you might recognize from 1970s MAD magazines and books. Cher, like everybody else, can’t help but recite in “the poem voice,” a kind of plodding tone everybody uses when reading poems for some reason. There are some prophetic moments of the cartoon and poem, including... 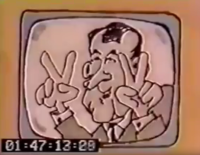 ...the bits about narcissism and political corruption.

There’s more Cher/poetry commentary to come because I’m really into protest poetry right now  and reading the mother anthology of protest poetry, “Against Forgetting, 20th Century Poetry of Witness,” the first section of which is poets of the Armenian genocide. 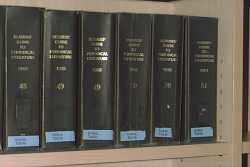 At work I often do usage research on Google Analytics and keyword research on Google Trends. When I start to learn any new research tool, I always test it out by plugging 'Cher' into the system to see how it works. I've done this my whole life, since learning how to use the green periodical lookup books at the school library when I was a tween.They were very boring books but led to all the articles of Cher in People Magazine and Ladies Home Journal that I could check out in the library which was a great incentive to plunging into the nerd universe. And I've had Google Analytics on my blogs for over a year now. The most popular page result is a blog post I did in 2008 about the fact that Cher did not ever release a recording or perform live the song people search for as “Cherokee People” or “Cherokee Nation.” The song is actually a Paul Revere & the Raiders song called "Indian Nation." I tallied up the results from an entire year and 649 people made that search and visited my blog to be disabused of that erroneous belief. A huge amount of people associate Cher with that song.

Last month my search queries also showed a very funny result for “cher all i wanna do is make love to you lyrics” confusing bombastic Heart with bombastic Cher. Due to this I looked up that song. On Wikipedia it says:

“Ann Wilson commented on the band's dislike for the song, stating, "Actually we had sworn off it because it kind of stood for everything we wanted to get away from. It was a song by "Mutt" Lange, who we liked, and it was originally written for Don Henley, but there was a lot of pressure on us to do the song at the time." Ann Wilson has made a number of comments on her dislike for the song, calling the song's message "hideous" in an interview with Dan Rather. In that same interview, Ann mentions that she's surprised at how many of their fans, especially in Australia and New Zealand, want to hear the song to this day when Heart plays live (Heart does not perform it live anymore despite the requests).”